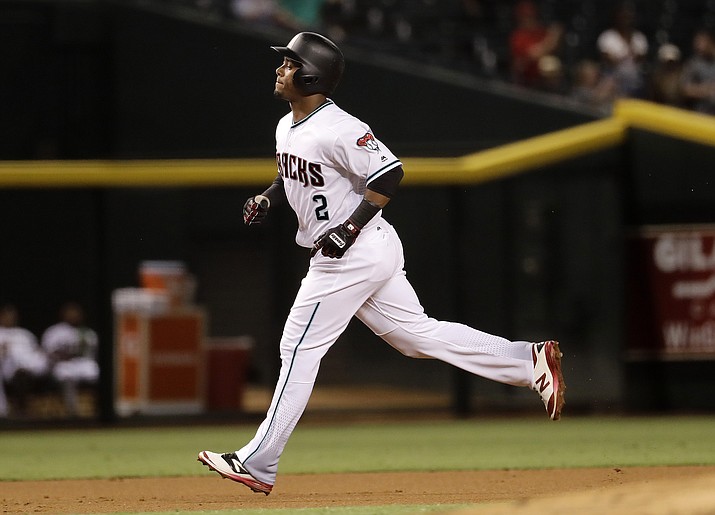 Arizona Diamondbacks Jean Segura rounds the bases after hitting a solo home run against the Colorado Rockies on Tuesday in Phoenix.

Segura hit solo shots off starter Jorge De La Rosa (8-8) in the first and fourth innings, setting a career high with his 13th and 14th homers. Drury homered in the fifth to give the Diamondbacks a 7-4 lead, and Paul Goldschmidt had three hits, scored three runs and stole his 25th base in support of winning pitcher Robbie Ray (8-13).

The Rockies' already slim postseason hopes took a hit, as the loss dropped Colorado to 7 1/2 games behind the St. Louis Cardinals for the second NL wild card.

Matt Koch earned a four-inning save. He struck out four and allowed only two hits for his first save.

The Rockies jumped on Ray quickly for three runs. Charlie Blackmon led off the game with a walk and scored on DJ LeMahieu's double. Then Nolan Arenado hit a blooper just inside the right-field line that turned into a triple, and Arenado scored on a groundout by Carlos Gonzalez.

The Diamondbacks answered in their half of the first against De La Rosa. Segura led off with a homer and Arizona sent all nine batters to the plate in scoring four runs. The first inning lasted 39 minutes.

Ray notched his 200th strikeout of the season in the fourth inning and became the fourth pitcher in team history to reach that mark, joining Randy Johnson (five times), Curt Schilling (twice) and Dan Haren (twice). Ray pitched five innings and allowed four runs on six hits with seven strikeouts and a walk.

Segura homered and Yasmany Tomas singled in a run in the fourth, giving the Diamondbacks a 6-3 lead. De La Rosa lasted only 3 1/3 innings and gave up five earned runs and eight hits with four walks.

Blackmon hit his 25th home run to open the fifth, a solo shot. But Arizona scored five runs in the bottom of the inning to take control.

Tomas added three hits and two RBIs for the Diamondbacks, who have won two straight after losing six in a row.

LeMahieu reached base in his 30th straight game. ... The Diamondbacks, with 17 hits Tuesday, are the first team since the 1930 Brooklyn Robins to record 10-plus hits in 13 or more consecutive games against a single opponent in a single season. The Robins' streak was 17 games against Philadelphia.

Diamondbacks: C Chris Herrmann had surgery to repair broken bones in his left hand on Tuesday. He was injured while sliding in a game last weekend.

Rockies: RHP Jeff Hoffman (0-3) faces the Diamondbacks on Wednesday for the first time in his career.

Diamondbacks: RHP Rubby De La Rosa (4-5) is set to make his ninth career appearance against the Rockies on Wednesday. He pitched only two innings in his last start, as he was on a pitch count having just come off the 60-day disabled list.