Steelers turn gambles into points in rout of Redskins 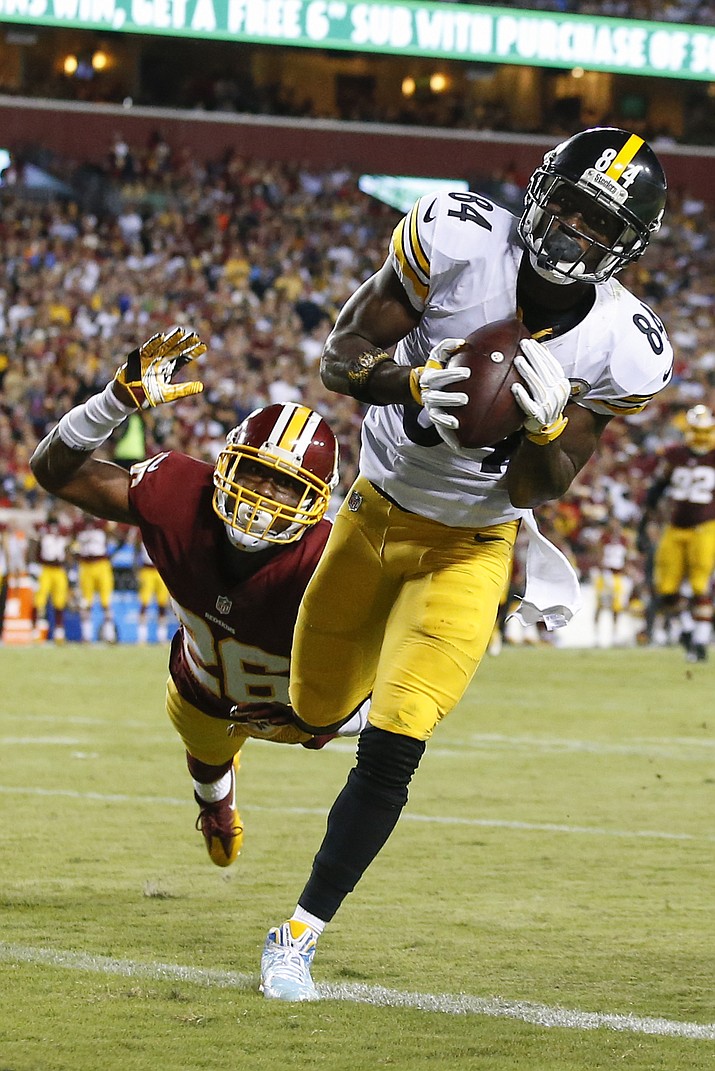 Pittsburgh Steelers wide receiver Antonio Brown scores a touchdown on a pass from quarterback Ben Roethlisberger, as Washington Redskins cornerback Bashaud Breeland dives toward him during the second half of an NFL football game in Landover, Md., Monday, Sept. 12.

With the Steelers facing a fourth-and-1 at the Washington 29 on Monday night, Tomlin could have a) kicked a field goal; b) sent DeAngelo Williams into the line or c) call for a short pass.

He chose none of the above. Under orders, Ben Roethlisberger went deep to standout receiver Antonio Brown, who beat double coverage and caught the ball in stride for the touchdown that gave Pittsburgh the lead for good in a 38-16 victory.

"That was the call," Tomlin explained afterward in matter-of-fact fashion. "We play to win."

If that means taking a gamble along the way, well, why not?

On a third-and-3 in the third quarter with the score 17-6, Roethlisberger again hooked up with Brown for a 26-yard score that all but sealed the win.

"We're not afraid to take shots," Roethlisberger said. "We're a team on third and short, we like to take chances. AB's second touchdown was on a third and short, I believe. That's just who we are."

Referring to the earlier fourth-down play, Roethlisberger smiled when recalling the view he had while dropping back in the pocket and seeing Brown work his way open.

"Get the ball up quick and let him make a play," the quarterback said. "The other two guys were wide open, but that's my guy."

For good reason. Brown made an outstanding catch on a ball that was brilliantly thrown.

"I had the ball in my hand. He took it out my hand as we both got hit," third-year pro Bashaud Breeland said. "It was just jarred loose. Other than that it should have been my play."

The Steelers didn't care who was on Brown, whether it be All-Pro Josh Norman or Breeland. The way Roethlisberger sees it, let the opposition adjust to you — and not the other way around.

"We just line up and play," the quarterback said. "We have a lot of respect for those guys, especially Josh, but it's on them to either move guys around or do what they have to do. When AB's on anybody, we like that matchup."

Pittsburgh's retooled offense finished with five touchdowns and 435 yards, including 300 passing by Roethlisberger.

The Steelers made both their fourth-down attempts and the Redskins failed at both. It was not a coincidence, according to Steelers safety Mike Mitchell.

"We're playing to win. We're very aggressive," Mitchell said. "We take the attitude of our head coach. We have no problem defending fourth downs, which we did a lot tonight.