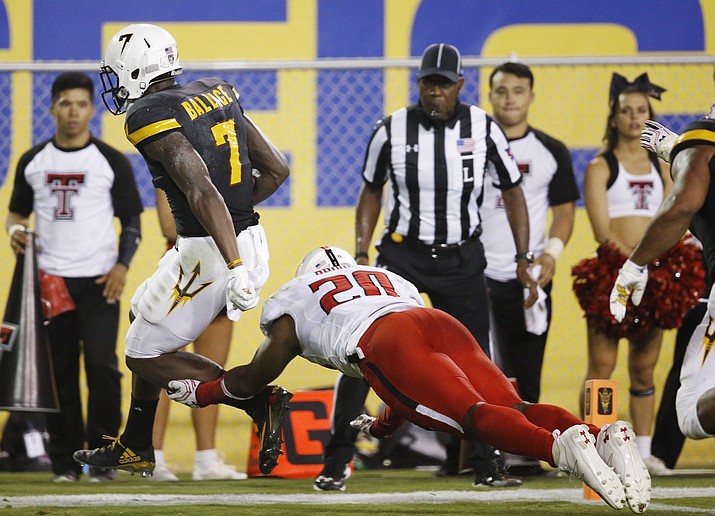 Arizona State's Kalen Ballage (7) runs for a touchdown against Texas Tech's Jordyn Brooks (20) during the first half of an NCAA college football game Saturday, Sept. 10, 2016, in Tempe, Ariz.

Two teams known for scoring points in bunches put on an offensive show in the desert, trading big plays and touchdowns on seemingly every snap.

Arizona State (2-0) opened up its playbook in an attempt to keep up with the Red Raiders.

Ballage was the focal point, scoring seven touchdowns on direct-snap runs and another on a 39-yard, double-reverse flea flicker. The junior matches the record set by Illinois' Howard Griffith in 1990.

Texas Tech (1-1) tried to keep up behind Patrick Mahomes, who threw for 540 yards and two touchdowns. The Red Raiders bogged down offensively in the second half, though, and had little defense against the quick-snapping Sun Devils.

Mahomes had two passes intercepted by Gump Hayes, including one that set up Ballage's seventh TD in the fourth quarter.

Ballage followed with a 75-yard run up the middle to match the record on his 13th touch of the game. He also tied the FBS record with four touchdowns in the second quarter.

Texas Tech: The Red Raiders proved they can still put up points, but continue to have problems defensively. Texas Tech allowed Manny Wilkins to pick through its secondary and had no answer when Arizona State went to its Wildcat set with Ballage in the red zone.

Arizona State: The Sun Devils have found their rhythm offensively after struggling for most of three quarters against Northern Arizona last week. Wilkins played confidently, throwing for 351 yards and two touchdowns, while Ballage gave them an unexpected scoring punch by matching his touchdown total of the three previous seasons combined.

Arizona State: The Sun Devils play at UTSA on Friday.