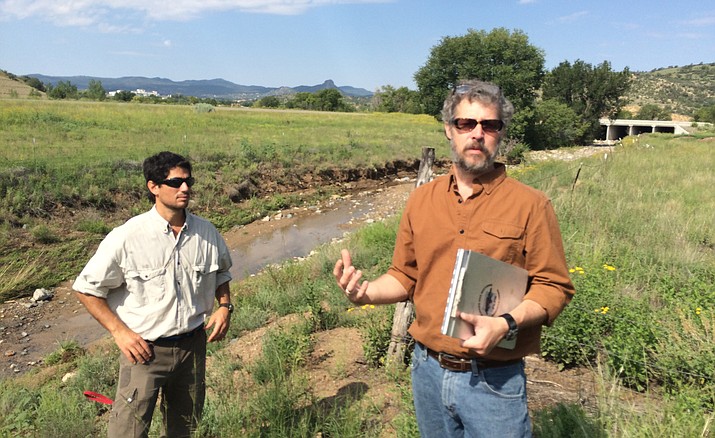 Guy Whol, left, and Michael Byrd of the Prescott Creeks organization talk about the importance of restoring natural qualities to the Slaughterhouse Gulch area along the Yavpe Connector.

PRESCOTT – With a busy state highway cutting through it, and shopping areas surrounding it, the Slaughterhouse Gulch drainage system faces some major challenges.

Runoff water regularly drains from the area along Highway 69 into Granite Creek and, ultimately, Watson Lake.

With that runoff comes more than just water. For years, Watson Lake has been listed as an “impaired” body of water for its levels of nutrient pollutants. More recently, the Granite Creek watershed also was listed as impaired for its high levels of E. coli bacteria.

Studies have shown that the pollutants come from many sources in the area. Among them: The water that courses off the highways and parking lots within the watershed.

The Prescott Creeks organization has spearheaded a number of recent projects aimed at allowing sediments and pollutants to filter out of the water naturally before it reaches the major water bodies. Projects at Prescott’s Four-Points intersection, as well as at the Adult Center on Rosser Street and the Fair Street rodeo grounds, were developed to improve water quality through a combination of native vegetation and sandy retention basins.

Now, Prescott Creeks is partnering with the Yavapai-Prescott Indian Tribe to focus on Slaughterhouse Gulch, the large multi-jurisdictional drainage system that encompasses the area along Highway 69, including the Frontier Village Shopping Center area.

The Arizona Department of Environmental Quality (ADEQ) awarded a $374,394 Water Quality Grant to cover 60 percent of the project cost, and Prescott Creeks, Yavapai-Prescott Tribe, and the collaborating Upper Verde River Watershed Protection Coalition will contribute the remaining 40 percent through “in-kind” services, such as volunteer labor, donated time and materials, and cash.

For example, they pointed to a drainage way near the Yavpe Connector. Through the years, Byrd said, the channel has been straightened to accommodate development in the area. That, in turn, allows the water to run virtually unchecked down the ditch-like channel.

“We want to slow it down,” Byrd said of the flow, which can become massive during heavy precipitation. To do that, he said the project would “introduce some sinuousity” or curves into the water’s path.

Over the years, he said, “We’ve lost a lot of the benefits” of the water’s natural pathways.

Native riparian vegetation and trees will also be planted along the path of the waterway to help stabilize the banks.

Slowing down the course of the water would benefit the area in another way as well. Byrd and Whol note that a large City of Prescott sewer main crosses the waterway near Granite Creek. A goal of the project will be to make such infrastructure less vulnerable to strong flows in the waterway.

To achieve its goals, Byrd noted that “working with the tribe is imperative,” because of the large portion of the drainage area that lies on tribal land.

“Prescott Creeks is tremendously excited to be on the ground, doing this level of project with the tribe,” he said.

Tribal Planning Peter Bourgois noted in a news release: “The Slaughterhouse Gulch project not only presents a great opportunity for the tribe and Prescott Creeks to work together, it highlights the tribe’s ongoing commitment to addressing critical water issues of both tribal and regional significance. This is a one of multiple projects under development throughout the multi-jurisdictional subwatershed.”

The ADEQ grant runs through May 2018, and Byrd expects much of the channel-restoration work to occur in the second year of the grant. The first work to occur likely will involve fencing off an area just northwest of the Highway 69/Yavpe Connector intersection, where a natural spring keeps a cluster and trees and vegetation green and thriving. The fence will be built to keep livestock out of the drainage area.