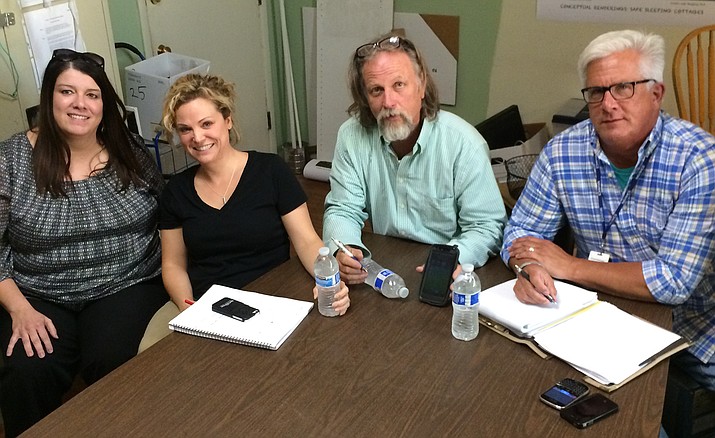 PRESCOTT – Coalition for Compassion and Justice Executive Director Paul Mitchell knows his leadership of a new homeless sheltering project is not winning favor with all.

CCJ leaders and a few of their fellow non-profit homeless advocates suggest the new “Safe Legal Sleep” project that enables up to 45 homeless people to sleep without threat of city fines at CCJ’s thrift store property on Fair Street is awakening the community to a long-term, yet relatively invisible reality.

Now that the community cannot ignore the homeless in their midst, Mitchell and his fellow advocates say they hope solutions will arise to get these men and women places of their own.

With that in mind, CCJ, the U.S. VETS Initiative, the Northern Arizona Veteran Affairs Health Care System Healthcare for Homeless Veterans Program, and Catholic Charities are spearheading yet an additional effort they have titled “30 in 90,” a program aimed at housing 30 of the most vulnerable homeless in 90 days.

U.S. VETS Initiative Executive Carole Benedict challenged those who oppose “Safe Legal Sleep” to step up and “help us.”

“We’re calling on our compassionate community; corporate landlords, corporate employers, people who have a camp trailer, any way people can support this movement,” said Benedict, who has spearheaded a 50-agency collaborative that is seeking solutions to homelessness that encompass housing, employment, mental and physical health care, transportation and addiction services. “That is the key to success.”

On Oct. 3, the non-profit leaders are inviting area landlords, property managers, city leaders and other concerned community members to breakfast in Esther Hall next to CCJ’s offices in the Prescott United Methodist Church on West Gurley Street. They hope to forge new partnerships that enable them to meet their 90-day goal. The agenda will include candid conversations on past pitfalls with this clientele and how the local non-profit agencies can offer case management support to make it worthwhile for landlords to rent to this population, leaders agreed.

“Safe Legal Sleep” is a “compassionate” first step to offering stability to the chronically homeless, people with mental health, addiction, and legal issues that make stable income and affordable rents beyond their reach, the leaders said.

“This is not THE answer,” Hyatt declared of the make-shift shelter that daily opens at 6:30 p.m. and closes at 6:30 a.m. for those who have obtained vouchers from CCJ’s Open Door program. “The answer is housing.”

They recognize this is no small challenge.

The VA’s Health Care for the Homeless Program director, Ed Shier, said his agency managed in June to obtain 10 new federal housing vouchers that have been assigned to the agency’s most needy homeless veterans. So far, none of those veterans has been able to find a landlord willing to rent to them for the maximum voucher value of $722 a month for a one-bedroom apartment. Catholic Charities Housing Case Management Coordinator Eliza Louden said her agency has funds to provide supportive housing leases to five homeless individuals but again they have found no places to use that money.

U.S. VETS Initiative operates a 56-bed transitional program and supplies 21 permanent, scattered site housing but they have no vacancies.

CCJ started this past year a program called “Second Chance Housing,” rehabbed recreational vehicles or mobile homes. They now have eight that house a total of 20 people, and by year’s end they hope to add three more such homes.

Shier said the VA has applied to build a project-based complex for homeless veterans, but no decision has yet been reached on that request.

Yet more is needed. Sooner than later, agency leaders said this week.

“Maybe we’ll have something to be thankful for at Thanksgiving,” Mitchell concluded.