Ducey speaks out against legalized marijuana 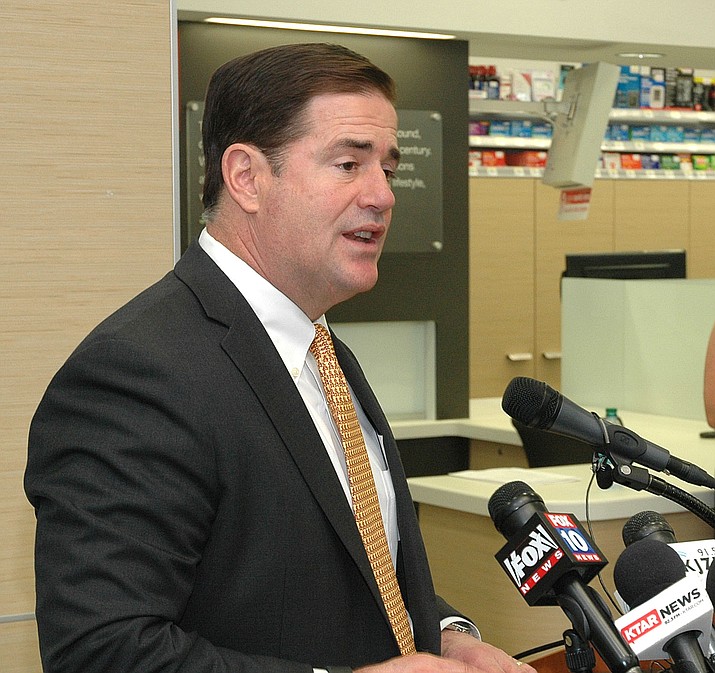 Gov. Doug Ducey discusses opiate abuse and what can be done to deal with it at a press conference Friday.

PHOENIX — Gov. Doug Ducey said he does not see legalizing marijuana as a better alternative to the legal and illegal use and abuse of opiates.

At a press conference Friday, the governor touted laws he has signed designed to deal with the problem of opioid addiction. That includes requiring physicians who prescribe the drug to check a statewide database to make sure patients are not “doctor shopping” and making it easy for friends and family members of addicts to get naxolone, an antidote to opiate overdoses, over the counter.

And he praised Walgreen’s for making drop boxes available for patients to dump their leftover drugs to prevent them from falling into the wrong hands or poisoning the water supply if flushed down the toilet.

But Ducey rejected the idea that a measure on the general election ballot to allow adults to legally use marijuana for any reason might provide a better alternative for those now using addictive opiates.

“Dealing with opioids is an issue we now have in our state right now that we need to take action on,’’ the governor said.

“If we want to expand this universe of people that are addicted and abusing drugs, well you’ll have that chance in November,’’ the governor continued. “I, for one, the person who has to deal with the 19,000 children that are in our foster care system that has 85 percent of their parents that are abusing or are addicted to drugs, do not think we should expand that universe or that it would be a good idea in any way.’’

Nor does Ducey believe marijuana is a safer alternative.

“I don’t think that any state became stronger by being stoned,’’ he said.

At Friday’s event, Ducey said opiates have been abused and misused.

He said some is due to the legal versions of the drug, which include codeine, morphine and oxycodone, being overprescribed by some physicians, whether through lack of education or the failure to check a database that might show them that the patient is already getting a prescription from someone else.

And that doesn’t even touch the issue of those who are buying and using those otherwise legal drugs illegally, as well as those using heroin.

“Addiction is responsible for more annual youth deaths than suicide, firearms, school violence and car accidents combined,’’ Ducey said. “Prescription drug abuse and misuse is an epidemic that lives in every state in the nation, including Arizona.’’

Existing Arizona law allows individuals with certain medical conditions and a doctor’s recommendation to use marijuana. About 100,000 Arizonans have obtained the necessary identification cards from the state Department of Health Services that allows them to purchase up to 2 1/2 ounces of the drug every two weeks from state-regulated dispensaries.

Proposition 205 would expand that so that any adult could have up to an ounce of marijuana from a somewhat-expanded network of dispensaries and use the drug in any non-public setting for any reason.

It sets up a regulatory and taxing scheme that proponents argue mirrors the system that now exists for alcohol. They also contend marijuana is safer and far less addictive than other drugs.

“I would check your facts when you say something is not addictive, that something’s safer than alcohol, and to look at the unintended consequences that have happened in states like Washington and Colorado,’’ he said, decrying “the way this has infiltrated high schools with brownies and cookies and Pez dispensers and all-day suckers.’’

And he cited comments by Diane Carlson, co-founder of Smart Colorado, a youth advocacy group, who said “I feel like we’re losing a generation’’ when asked about the experience with legalizing marijuana there.