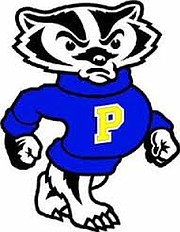 PRESCOTT — David Pearce had 11 carries for 144 yards and a touchdown, Collin Mills ran for two more and the Prescott football team amassed over 400 yards of offense in a 38-16 win over visiting Combs on Friday night.

Mills had 15 carries and 84 yards, while quarterback Ryan Greene ran 15 times for 113 yards and a touchdown for Prescott, which bounces back from a disappointing 44-23 Week 1 loss to Marcos de Niza.

First-year Prescott head coach Michael Gilpin said coming into game day, he felt the Badgers had an advantage offensively against Combs’ defense, but early miscues kept them off the field in the first half.

“We couldn’t do anything in the first half because we didn’t get a shot to be on the field,” Gilpin said. “We made some sloppy plays that we have to get fixed.”

Prescott forced two punts during Combs’ first possession, but two miscues led to a 23-yard field goal by Joshua Brinkman, giving the Coyotes a 3-0 lead with 6:16 to play in the first quarter.

The mistakes came off a late-hit by Pearce on the punter, resulting in a 15-yard penalty and automatic first down, then John Chaffeur muffed the second punt, setting up the Brinkman field goal.

“We knew that if we kept fighting, and we had a chance to get the football, we knew we could get it going. And just like last week against Marcos, we felt like we could move them around in the trenches,” Gilpin said.

And the Badgers did just that with nearly three players having 100-yard games on the ground, including Pearce.

“We have three really good running backs on our team, we’re really blessed. … We go with the hot hand, and tonight, David put us on his big broad shoulders and he carried us,” Gilpin said.

“Every practice I’m on them to make holes and block, and they did tonight. I’m very proud of them,” Pearce said.

“First of all, it was our offensive line pushing back. That was pretty good. Mainly hitting them harder, pushing them back,” Mills said. “It feels great, I love winning more than anything. Nothing is better.”

After Combs took a 3-0 lead, the Badgers responded just 33 seconds later with a 4-yard touchdown run by Mills, giving Prescott a 7-3 lead.

The score was set up by a 61-yard kickoff return by Dawson Winslow.

After a turnover on downs by Combs, a 37-yard field goal by Bryce Peters gave Prescott a 10-3 lead, but the Coyotes would answer on a 1-yard touchdown run by Jordan Lee with 2:51 to go in the half, tying it 10-10.

On the ensuing possession, Prescott’s offense put together a 12-play, 82-yard drive capped by Winslow’s 17-yard touchdown run with 11 seconds to go as the Badgers claimed a 17-10 lead and never looked back.

Kickoff for Combs and Bradshaw Mountain is Friday, Sept. 9, at 7 p.m.