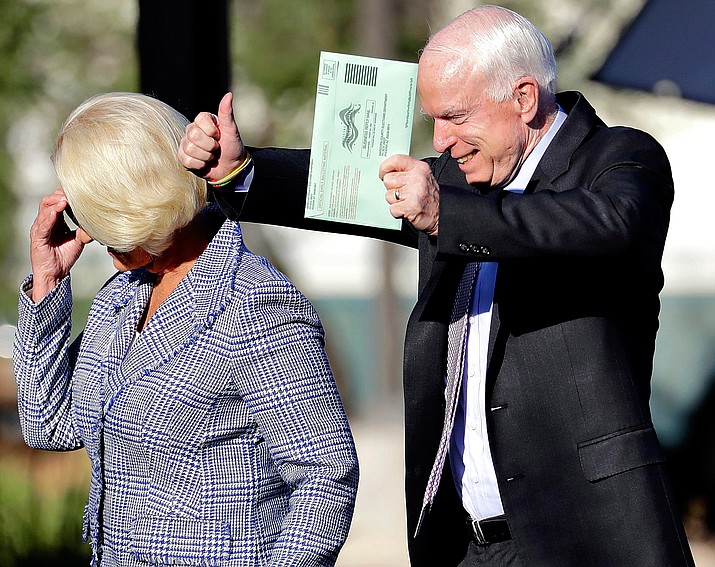 PRESCOTT – U.S. Sen. John McCain, R-Arizona, appears to be a voter who will hold his nose while he votes for president, as the old saying goes.

He definitely doesn’t support Democratic nominee Hillary Clinton, and, while he stands in support of fellow Republican Donald Trump, he expressed some misgivings about Trump’s proposed policies in a Thursday, Sept. 1 interview with The Daily Courier.

McCain, who was not present at Trump’s Phoenix rally on Wednesday, said, “I do predict you may see a larger vote for (Libertarian candidate Gary) Johnson, than we’ve ever seen in history, just because – a poll this morning had some overwhelming number of the American people (saying) they can’t stand either one of them.”

Chief among the disagreements he has is with Trump’s immigration policy.

McCain advocates immigration reform, but favors “a 10-year path” to citizenship, which would include immigrants paying back taxes, learning English, obtaining a Green Card, and then waiting.

“That’s not amnesty, that’s a damn hard path,” he said. “We can’t have a society in America where 11 million people are estranged. You’ve got to give them a chance.”

McCain said the border wall that Trump advocates is not the solution.

“The way you secure the border is the way the Israelis do: the Israelis have surveillance of every inch of the border with the Sinai,” controlled from command centers, and when “they see somebody try to penetrate, they send out a SWAT team.”

McCain laments the days when the ability to work across the aisle was seen as a positive attribute, noting that, now, when he works with Democrats, “You know what one of the biggest complaints against me is? RINO (Republican In Name Only).

“If I were in either one of their shoes (Clinton and Trump), the first thing I’d do after inauguration day is, I’d call on the (party) leaders and I’d say, ‘Every single American that I’ve ever met wants tax reform. Let’s do tax reform,’” he said, because it “would show the American people we can work together. That’s in everybody’s interest.”

McCain said that kind of cooperation was vital.

“If we don’t, I worry about the legitimacy, ... if the majority of the population doesn’t think you’re legitimate, the consequences of that over time … can’t be good,” he said, adding that, if re-elected to the Senate, he would continue his “outreach” efforts with Senate Democrats.

McCain faces a Democratic challenge in the November general election from U.S. Rep. Ann Kirkpatrick. She advanced after facing only a write-in opponent in Tuesday’s primary.