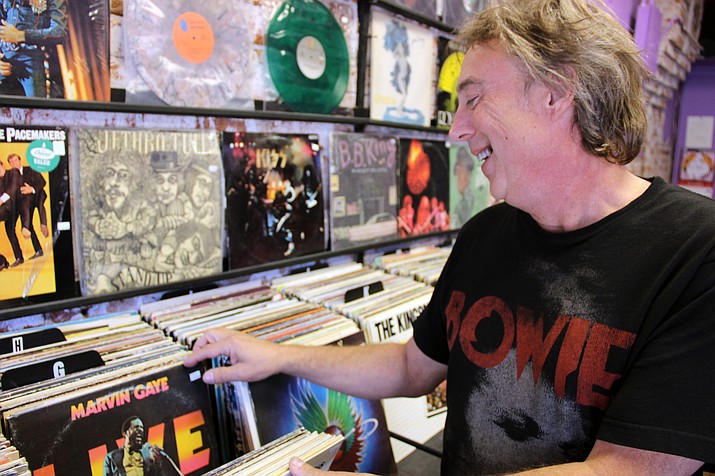 Daryl Halleck sifts through some of the vinyl he stocks in his record store, Trax Records.

Daryl Halleck sifted through some of the vinyl he stocks in his new record store. He was wearing a David Bowie shirt and had an Alice Cooper Greatest Hits album playing in the background.

Once he started collecting the classic analog sound storage medium — considered by many audiophiles to produce the purist sound quality — it became his life.

“All I did was buy records,” Halleck said.

A year later (1987) he moved his operation to Prescott Valley and stuck it out there for about 15 years.

In that time, he saw music mediums rise and fall in popularity. First it was records and cassettes in the 1980s, then CDs in the 90s and then digital audio files at the turn of the millennium.

By the time he closed up shop in 2004, the well for small record/CD stores had essentially run dry as more consumers were finding ways to digitally download and share music.

For the following decade, he worked a couple different jobs just to stay busy and have a paycheck coming in. However, he held onto his records and never gave up on his passion.

“I always just had this gut feeling that I would reopen the record store,” Halleck said.

Starting in 2008, his window of opportunity began to open.

Sales of records throughout the country suddenly jumped and steadily continued to climb. In 2015, revenues from vinyl albums were $416.2 million — up 28.3 percent from the year before — according to a report published by the Recording Industry Association of America last March. Sales of old-fashioned LPs haven’t been that high since 1988, the report said.

Invigorated by the news and anxious to get back into the business, Halleck found a location near the center of downtown along South Montezuma Street and began renovating the space for a revival of Trax Records.

Earlier this month, he opened the doors to the public.

“It’s kind of like the old days,” Halleck said.

The only real difference is vinyl technology has improved and continues to get better.

“I think its way better,” Halleck said. “They’ve come out with 200 gram vinyl and now there’s even something coming out soon called high definition vinyl.”

With the improvements come a higher price tag.

Used vinyl has also doubled in value since Halleck was last in the business, he said.

Part of that is due to inflation and the rest of it is a matter of basic economics.

Since demand has increased and the supply remains limited, prices go up.

Parker Smith, a young local musician who has been collecting old vinyl most of his life, said he’s seen a marked increase in the number of his friends interested in the medium. Many have expressed to him the simple joy they get in just trying to locate an album they’ve been looking for.

“The thrill of the hunt to find a good copy of a record,” Smith said.

Smith, 24, is originally from Seattle, where he said vinyl has been booming.

“The Northwest especially; it’s huge up there,” Smith said. “More and more young people are getting interested in vinyl.”

To meet the demand, many musicians have been cutting their new music straight to vinyl — something Parker is doing with an album he just finished recording at Prescott’s Raven Sound Studio.

This has caused an interesting predicament.

Vinyl pressing plants throughout the country have been receiving so many requests for production that most have significant wait times for processing orders.

For Southern California Americana musician Alice Wallace, who recently passed through Prescott while on tour, it took nearly seven months to get an album of hers printed on vinyl.

“We didn’t think it would take this long to release it, but everyone is wanting to put out vinyl right now,” Wallace said.

Entrepreneurs throughout the country have reacted by opening small startup pressing plants to meet the need.

Parker was able to find such a startup through his music connections in Seattle. Some buddies of his told him about a small company in Ohio run by just a couple guys, so he contracted with them.

“They have a lot faster of a turnout,” Parker said.

No one can say for sure if this increased interest in vinyl will sustain or if it’s just a fad, but Halleck is simply glad to see it’s happening at all, even if just from a consumer standpoint.

“It’s great,” Halleck exclaimed. “I don’t know what the future holds for me or the [record] industry, but for one thing, they’re printing way more things on vinyl, so I have more choices now on things I like to buy and listen to personally.”