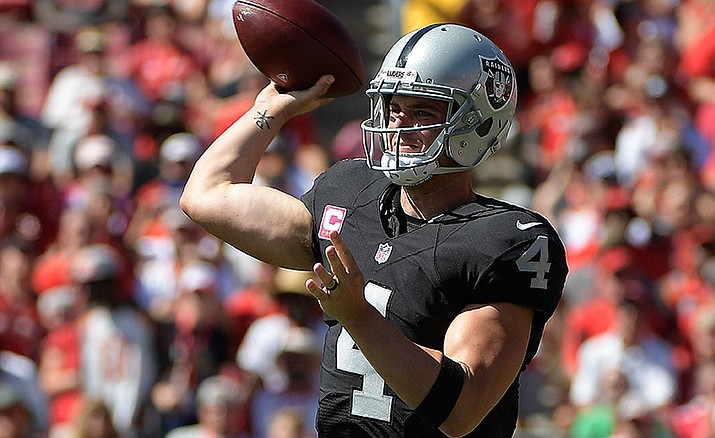 TAMPA, Fla. (AP) — Derek Carr threw a 41-yard touchdown pass to Seth Roberts with 1:45 remaining in overtime, capping a record-breaking day for the Oakland Raiders in a 30-24 victory over the Tampa Bay Buccaneers on Sunday.

Carr threw for a franchise-record 513 yards, completing 40 of 59 passes without an interception, and the Raiders overcame an NFL-record 23 penalties for 200 yards.

Carr also threw touchdowns to offensive tackle and ex-Buc Donald Penn, Amari Cooper and Mychal Rivera as the Raiders (6-2) improved to 5-0 on the road.

Jameis Winston threw for 180 yards and two touchdowns for the Bucs (3-4), who took a 24-17 lead on a 1-yard run by Jacquizz Rodgers and 2-point conversion.

Carr threw his TD pass to Rivera to tie it with 1:38 remaining, and Sebastian Janikowski missed a 50-yard field goal as time expired to send it into overtime.

Janikowski misfired again from 52 yards on Oakland’s first possession of the extra period.

LONDON (AP) — Washington and Cincinnati played to the second NFL tie game in seven days, the first time there have been two draws in a season since 1997.

The sold-out crowd of 84,000 at Wembley Stadium left deflated and even puzzled as the regulation-time shootout between Kirk Cousins and Andy Dalton turned into an overtime comedy of errors.

Washington (4-3-1) appeared to have the game won with 2:13 left in overtime, but Dustin Hopkins hooked his 34-yard field goal attempt wide left.

The Redskins got the ball back with 1:11 remaining when Dalton fumbled at the Bengals 47 on a quarterback sneak. Cousins couldn’t connect downfield and tossed his final desperate pass tamely into the sideline to preserve the draw. Cincinnati is 3-4-1.

The unlikely result came one week after the Seattle Seahawks and Arizona Cardinals tied 6-6.

The Falcons (5-3) snapped a two-game losing streak, driving 75 yards for the winning score after Aaron Rodgers put the Packers (4-3) ahead with his fourth TD pass of the game.

With Julio Jones shut down in the second half, Ryan turned to Sanu to bail out Atlanta. He caught five passes for 50 yards on the final possession, the last a touchdown pass in the back of the end zone after he lined up in the slot and got matched against linebacker Jake Ryan.

Sanu finished with nine catches for 84 yards, both season highs in his first season with the Falcons. Ryan was 28 of 35 for 288 yards and three touchdowns.

Rodgers threw for 246 yards, teaming up with a bunch of unknown receivers as the banged-up Packers played without six starters. Linebacker Clay Matthews and receiver Randall Cobb were among those who couldn’t go.

But defensive coordinator Wade Phillips was taken to a hospital after getting knocked down during Brady Roby’s 51-yard touchdown return in the second quarter, tempering their enthusiasm.

San Diego running back Melvin Gordon was blocked into the 69-year-old assistant, who was strapped to a backboard and carted off the field. The Broncos said Phillips was alert and had movement in his arms and legs when he arrived at the hospital via ambulance.

With linebackers coach Reggie Herring taking over Denver’s defensive calls for Phillips, the Broncos (6-2) had a goal-line stand in the closing minutes and picked off Rivers twice more in the second half. They only turned one of those takeaways into points, however, and that allowed the hard-luck Chargers (3-5) to stay in it until the end, forcing Denver to make two stands in the closing minutes.

NEW ORLEANS (AP) — Drew Brees passed for 265 yards and a touchdown and scored on a quarterback keeper.

The victory wasn’t assured until New Orleans’ much-maligned defense, ranked 29th, came up with a stop on Seattle’s final drive. Russell Wilson took the Seahawks (4-2-1) to the New Orleans 10, where on one final play he lofted a pass toward the corner of the end zone. Jermaine Kearse caught the ball, but landed out of bounds.

Wilson finished with 253 yards passing and was intercepted once by linebacker Nathan Stupar — a play that set up the Saints’ first TD on Brees’ 1-yard dive over a pile of players. Brees’ lone touchdown pass went to Brandin Cooks on a 2-yard slant, which gave the Saints the lead for good early in the fourth quarter.

Brady went 22 of 33 for 315 yards and threw four touchdowns. He improved to 26-3 against Buffalo, and matched a record set by Brett Favre, who went 26-9 against Detroit.

The Patriots (7-1) have won four straight since Brady returned after opening the season serving the NFL’s four-game “Deflategate” suspension. His absence included New England’s only blemish, a 16-0 home loss to Buffalo (4-4) on Oct. 2, the first time the Patriots were shut out at home since 1993.

The Patriots then broke the game open by scoring 27 points over five consecutive possessions. The surge began with Brady’s 53-yard pass to Rob Gronkowski with 4:18 left in the second quarter, and ended when Brady took a seat and was replaced by backup Jimmy Garoppolo with 4:29 left.

It was a rough game for the Chiefs (5-2), who lost Smith twice after hits to the head and finished with Charcandrick West as their only healthy running back.

Smith was checked for a concussion in the first half and cleared to return. He left again early in the third quarter after Clayton Geathers shoved Smith’s head to the turf as the quarterback tried to slide underneath the tackle.

Smith was then diagnosed with a concussion and did not return.

Foles’ 14-yard TD pass to Travis Kelce early in the second quarter made it 10-0. Smith made it 17-7 at halftime with a 13-yard TD pass to Jeremy Maclin, and after Smith’s second departure, Foles hooked up with Tyreek Hill on a 34-yard scoring pass for a 24-7 lead.

Andrew Luck finished 19 of 35 with 210 yards, two touchdowns, one interception and one fumble lost for the Colts (3-5).

HOUSTON (AP) — Brock Osweiler bounced back from an ugly performance by throwing for 186 yards and a touchdown to help the Texans remain perfect at home. Osweiler has struggled in his first season in Houston, but has been better at home where he’s thrown eight of his nine touchdown passes.

The Texans (5-3) have lost all of their road games, including a 27-9 loss to Denver on Monday, but they’ve had no such trouble in Houston.

Matthew Stafford threw for 240 yards and a touchdown for Detroit (4-4), which had a three-game winning streak snapped as the Lions were unable to continue a string of late-game comebacks.

CLEVELAND (AP) — Matt Forte ran for 82 yards and a pair of second-half touchdowns, helping the Jets rally to a second straight victory.

Ryan Fitzpatrick shook off an ugly first half to throw for 222 yards and a touchdown while leading the Jets (3-5) on three long scoring drives after spotting the Browns (0-8) a 13-point lead.

Josh McCown passed for 341 yards with two touchdowns to Andrew Hawkins and two interceptions in his return to the lineup from a broken collarbone. Terrelle Pryor caught six passes for 101 yards, but couldn’t keep Cleveland from its worst start since the 1975 team dropped its first nine games.

The Browns have lost 11 straight overall dating to Week 14 of last season and are 3-26 over their last 29. Cleveland blew a halftime advantage for the third time during the streak.

ARLINGTON, Texas (AP) — Dak Prescott threw a 5-yard touchdown pass to Jason Witten in overtime, giving the Dallas Cowboys their sixth straight win with a 29-23 victory over the Philadelphia Eagles on Sunday night.

Prescott rallied the Cowboys with a late tying touchdown pass to Dez Bryant and won the rookie quarterback duel with Carson Wentz. Dallas (6-1) took a two-game division lead after rallying from a 10-point deficit in the fourth quarter.

The 23-year-old Prescott recovered from a shaky start, finishing 19 of 39 for 287 yards with two scores and an end zone interception that cost the Cowboys points late in the first half.

Wentz had the Eagles (4-3) in position for a win with an efficient performance. But he couldn’t move Philadelphia late in regulation with the game tied. The Eagles never got the ball in overtime after Prescott led the 75-yard scoring drive.