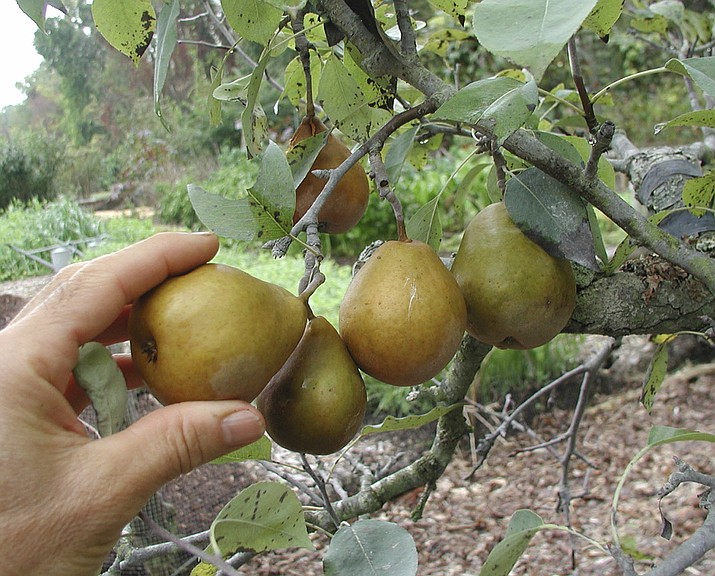 This undated photo shows Seckel pears being harvested in New Paltz, N.Y. Seckel, like other European pears, can be picked mature to finish ripening off the plant. (Lee Reich via AP)

Pick up an apple and hold it to your ear. Can you hear it breathing?

Of course you can’t. But that apple, like any other harvested fruit or nut, is breathing, taking in oxygen and giving off carbon dioxide just as you or I do.

The harvested apple is breathing because it’s still alive. If it stops breathing, it will die and taste bad. Being alive, an apple (or any other fruit) is always changing, and the job for us fruit lovers is to bite into it during the window of peak flavor.

Back to the tree: As harvest time approached, sugars were developing and certain “volatiles,” or flavor components, began to form. At this point in a fruit’s life, we have to distinguish between two groups of fruits.

The first, called nonclimacteric fruits, and including such delicacies as cherries, grapes, raspberries and strawberries, undergoes a smooth transition from unripe to ripe to overripe. These fruits’ breathing slows down as ripening is approached and then passed. You pick them when they are perfectly ripe and then, ideally, eat them on the spot, because they’re not going to get any better.

Pears and apples are in the second group, climacteric fruits. As they approach maturity, their breathing also slows down. But then, just as peak flavor is developing, they begin panting heavily. This period of heavy panting and peak flavor is short-lived, and soon after it, everything subsides and the fruit is on its way to becoming overripe.

Once a climacteric fruit reaches a certain maturity, it can be plucked from the tree to finish ripening off the plant. (Not so for nonclimacteric fruits.) What’s more, a mature apple or pear can be plucked from the tree and cooled to slow its reaching that climacteric stage. This is convenient for us: We can store mature apples and pears, so abundant now, in the refrigerator, and then take them out later to finish ripening.

All this assumes, of course, that the fruit was picked when truly mature. An apple or pear picked too early will never ripen.

So you can retard or promote ripening by letting ethylene escape or by containing it. Bagging fruit, for example, will contain the ethylene. Damage from bruising and pests, incidentally, also promotes ethylene evolution, speeding ripening and, after that, rotting. That’s why an apple is often redder around a point of damage, and why “one rotten apple spoils the barrel.”

Another way to manipulate ripening is to add ethylene from another source. Burning releases ethylene. This was first realized when pineapple plants fruited sooner the closer they were to the ends of the fields where sugar-cane waste was being burned. Fruit growers have sprays which produce the same effect. Even picking a fruit speeds up ethylene production by releasing the hold of an ethylene inhibitor present in plant leaves.

Some climacteric fruits, such as pear and avocado, cannot ripen to gustatory perfection on the tree. And ripening a pear to perfection takes almost as much skill as growing it on the tree. You must pick the fruit at the appropriate, pre-ripe stage and then, for some pears at least, chill the fruit for a few weeks. After that, the fruits ripen best in a room that is cool (about 65 degrees) and not too dry. It is some trouble, but plant a Magness or Comice pear tree, pick the fruit at the right moment, ripen them carefully, and your taste buds will thank you.

Luscious fruits come from timely harvest, good storage
When is fruit ready to pick? Nature offers different clues
Column: A guide to fruit trees that produce the best harvests
Get the most out of your tomato harvest
Best fruit trees for mountain food