Chew on This: Want spooky dining for Halloween weekend? Prescott has you covered 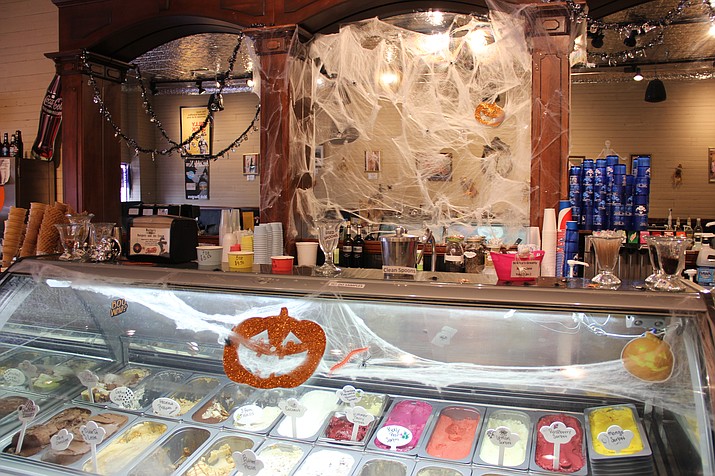 Decorations at The Raven Café.

Decorations at The Palace Restaurant and Saloon.

If it’s Halloween-themed dining you’re looking for this weekend, here are a few places in and around downtown Prescott to check out.

Often lauded for its Halloween décor efforts, The Raven Café is a sight to see during these final days of October.

“The Raven’s always been one of those places to be during Halloween,” said bar manager Sean Thomas.

Going with a pirate theme this year, the staff have placed swashbuckling skeletons, cobwebs and torture devices from the brig throughout the eccentric café.

On Halloween day, which falls on Monday this year, the café will be hosting a Halloween bash from 8 to 11 p.m. There will be live music, a costume contest and drink and food specials.

Employee’s at Marino’s Mob Burgers already dress up every day for the 1920s-themed classic American restaurant, so you can expect them to go all out on Monday, Oct. 31.

Two special options already on the menu are a Beetlejuice shake and a spooky sloppy joe.

Far From Folsom will be hosting two Halloween celebrations this year — one for the kids and one for the adults.

The adult party will be on Saturday, Oct. 29, and feature live music, a costume contest and drink specials (including one called Bobbing for Apples).

Their theme this year is jailbird. All of the employees will be dressed as either prison guards or inmates.

On Monday, the staff will be toning down the party so kids can trick or treat at the restaurant from 4-to-6 p.m. There will be caramel apples and candy stations throughout the venue.

Tapping into its historical value, The Palace Restaurant and Saloon is showing some Halloween spirit with hanging cowboys and shady ladies.

The establishment was recently featured on the television show Ghost Adventures, so the owner, Dave Michelson, intends to play the feature throughout the day on the restaurant’s televisions, said employee Martha Mekeel.

There will also be free candy.

“And you don’t have to be a kid to get the candy,” Mekeel said.