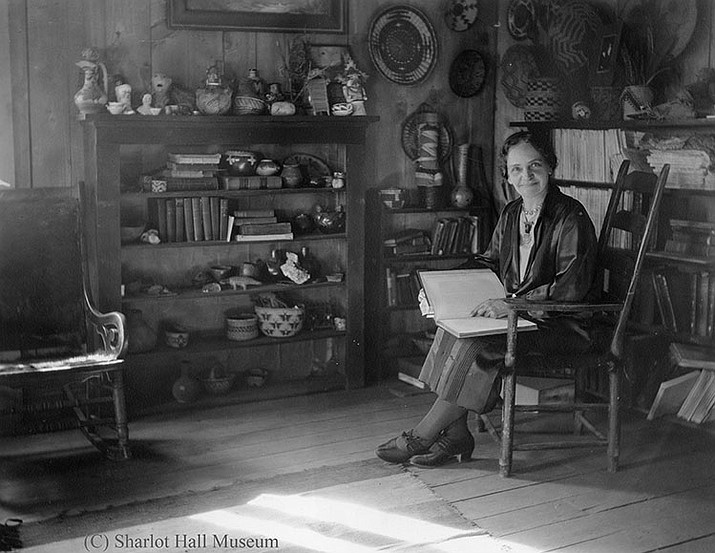 Sharlot Hall lived in the attic of the Governor’s Mansion until the opening of the Sharlot Hall Building, which contained an apartment for her, above. Call number PO-0148-PP.

Sharlot Hall was just twelve years old in 1882 when her family moved by covered wagon from Kansas to Arizona Territory. Sharlot rode her pony all the way, herding horses which her father sold once they reached Arizona. 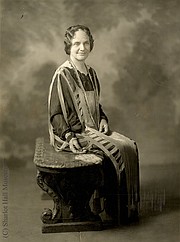 The family settled onto a ranch near Dewey, and Sharlot settled into a life of ranching work. Her father didn’t place much emphasis on formal education. Sharlot attended a school term in Dewey and a high school term in Prescott, but she was largely self-educated. Sharlot’s mother was a prolific reader who passed the love of reading to Sharlot. From an early age, Sharlot wrote poetry and articles, which she began selling as a young adult. She also became interested in Arizona history as a teenager through listening to stories told by Judge Henry Fleury, who lived in the former home of the territorial governors (the Governor’s Mansion) in Prescott.

When she was a young woman, Sharlot began contributing her poetry and articles to the magazine Land of Sunshine, which eventually became the popular and influential Out West magazine. Sharlot also worked as the publication’s editor for a few years, living in Los Angeles for several months at a time. Sharlot wrote about Arizona and its history, while also collecting old timers’ artifacts and stories.

In 1904 she was the representative of the Monday Club (Prescott’s women’s club) to the Arizona Federation of Women’s Clubs. She served for many years as the historian of the Federation and as president of the Arizona Pioneers’ Association.

After gaining prominence as a historian, Sharlot was appointed in 1909 to serve as Arizona Territorial Historian. She was the first woman to serve in a public office in Arizona Territory. Through this position, she continued to learn about Arizona history by traveling and researching the entire territory. In 1910, she published a book of poetry, Cactus and Pine, which was reviewed favorably in the East and West. Sharlot’s position as territorial historian ended in 1912 when Arizona became a state. 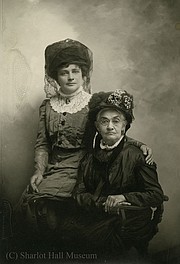 Sharlot Hall was not shy, and she made her voice heard concerning matters related to Arizona and women’s rights. In 1905, after President Roosevelt proposed that Arizona and New Mexico territories be combined and admitted to the Union as a single state, she wrote the passionate poem “Arizona” which praised Arizona and advocated separate statehood. She arranged for a copy to be given to every member of both U.S. congressional bodies. Although it is difficult to tell what effect her poem had, the idea of joint statehood was dropped. A few years later when women campaigned to win the vote in Arizona Territory, she wrote a long letter discussing the vital roles that women played in their families and communities. Sharlot believed that “women must have absolute political equality—in fact have absolute equality in all ways, before we will have a race of responsible, well-born, well-trained people.” In addition to speaking out for women’s rights, she served as Arizona’s electoral delegate in 1925, traveling to Washington, D.C., following the election of Calvin Coolidge as president. During this exciting trip, she wore a sheath overdress made of copper, created by the Arizona Industrial Commission to showcase one of the state’s major industries. This copper sheath is now exhibited at the Sharlot Hall Museum.

Sharlot carved out a life as a writer, historian and ranch woman. She remained on the family ranch until after her parents’ deaths when she negotiated a lifetime lease to live in the Governor’s Mansion and to turn it into a museum. In 1928, she began receiving visitors in the mansion. Sharlot worked as curator, director, fund raiser and tour guide in the museum for the next fifteen years. She was able to add additional buildings and exhibit space through New Deal funding during the 1930s.

Sharlot continued to operate the Museum until a few weeks before her death in 1943. Then volunteers took over, and the Museum continued to grow. Today, the Sharlot Hall Museum is an educational and cultural center, where staff and volunteers carry on Sharlot’s legacy. On October 27, Sharlot’s birthday, it’s appropriate to pause and reflect on the vital work of this woman, who as a poet, historian, writer and museum founder, made an indelible mark on Arizona’s history.