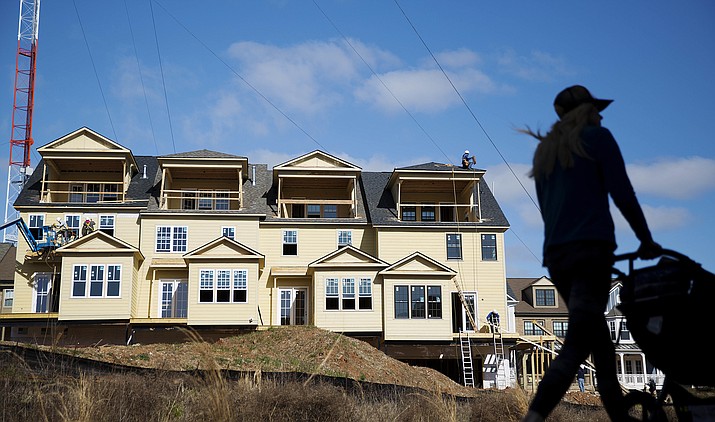 FILE - In this Wednesday, Feb. 17, 2016, file photo, town homes stand under construction as a pedestrian walks along the BeltLine in Atlanta. First-time buyers may be entering the U.S. home market in greater numbers than industry watchers had assumed. Nearly half of sales in the past year went to people who were buying their first home, according to a survey released Tuesday, Oct. 18, 2016, by the real estate firm Zillow. Thatâ€™s a much higher proportion of the market than other industry estimates had indicated. (AP Photo/David Goldman, File)

But a new survey by the real estate firm Zillow suggests that first-time buyers may be entering the market in greater numbers than industry watchers had assumed.

Over the past year, the survey found, nearly half of home sales have gone to first-timers. That’s a much higher proportion than some other industry estimates had indicated. And it comes as a surprise in part because ownership rates for adults under 34 are at their lowest levels since the government began tracking the figure in 1994.

Zillow’s survey results suggest that the trend is shifting, and that some of this year’s growth in home sales has come from a wave of college-educated couples in their 30s, who are the most common first-time buyers.

They are people like Natasja Handy, a 32-year-old lawyer and new mother. She and her husband, a doctor, are about to close on their first home in the Northeast section of Washington, D.C. – a row house with about 1,900 square feet that cost $720,000.

The couple worked with brokers at Redfin and made a 5 percent down payment after having lost two bids on other homes.

“We waited a very long time to purchase our first house,” Handy said. “We’ve always felt like we were giving someone else our money, instead of putting it into something we own.”

In suburban Minneapolis, few first-time buyers have enough savings for a down payment, and many rely on gifts or loans from relatives, said Marcus Johannes, an agent with Edina Realty.

“Most of my people, they get funds from family,” he said. “They get creative tapping 401(k)s.”

If the pattern in Zillow’s survey holds, it could raise hopes that today’s vast generation of 18-to-34-year-old millennials will help support the housing market as more of them move into their 30s.

The 168-page report that Seattle-based Zillow released Tuesday also found that home ownership is increasingly the domain of the college-educated.

And it reported that older Americans who are looking to downsize are paying premiums for smaller houses.

• Forty-seven percent of purchases in the past year went to first-time buyers. Their median age was 33. By contrast, surveys from the National Association of Realtors have indicated that first-timers account for only about 32 percent of buyers.

The difference between the two surveys may stem from their methodologies. The NAR has used a mail-based survey for its annual figures. Zillow used an online survey that might have generated a greater response rate from younger buyers.

Zillow’s findings might help explain a persistent shortage of homes for sale: Unlike move-up buyers, first-time purchasers don’t have a home to list for sale, thereby depriving the market of supply.

Adam DeSanctis, an NAR spokesman, noted that his organization’s own survey, due out later this month, will show a rising share of first-time buyers, though it will remain below the historical average of 39 percent that’s prevailed since the organization began tracking this figure in 1982.

DeSanctis noted that government figures show home ownership among young adults remain at its lowest level in history, which is why his organization is skeptical that nearly half of sales go to first-time buyers.

• No college? Dwindling chance of homeownership

It’s become harder to realize the dream of home ownership without a college degree. Sixty-two percent of buyers have at least a four-year college degree. Census figures show that just 33 percent of the U.S. adults graduated from college. The gap between the education levels of homebuyers and the broader U.S. population indicates that workers with only a high school degree are becoming less likely to own a home. In 1986, just 12 percent of homeowners were college graduates, according to government figures.

Asians also make up a greater share of millennials. This means that as today’s millennial generation ages, the housing market may look considerably more diverse than it does now.

The so-called “silent generation” – those ages 65 to 75 – bought homes in the past year with a median size of just 1,800 square feet, about 220 square feet smaller than the homes they sold. But that smaller new home still cost more. These retirement-age buyers paid a median of $250,000, nearly $30,000 more than the home they sold. In some cases, the higher purchase price likely reflects the profits from the sale of their previous home, in other cases a desire by upscale buyers for luxury finishes and amenities.

• Starter homes are no longer popular.

When millennials buy, they’re leapfrogging past the traditional, smaller starter home. This younger generation paid a median of $217,000 for a 1,800-square-foot house. That median is nearly identical to what older generations buy.