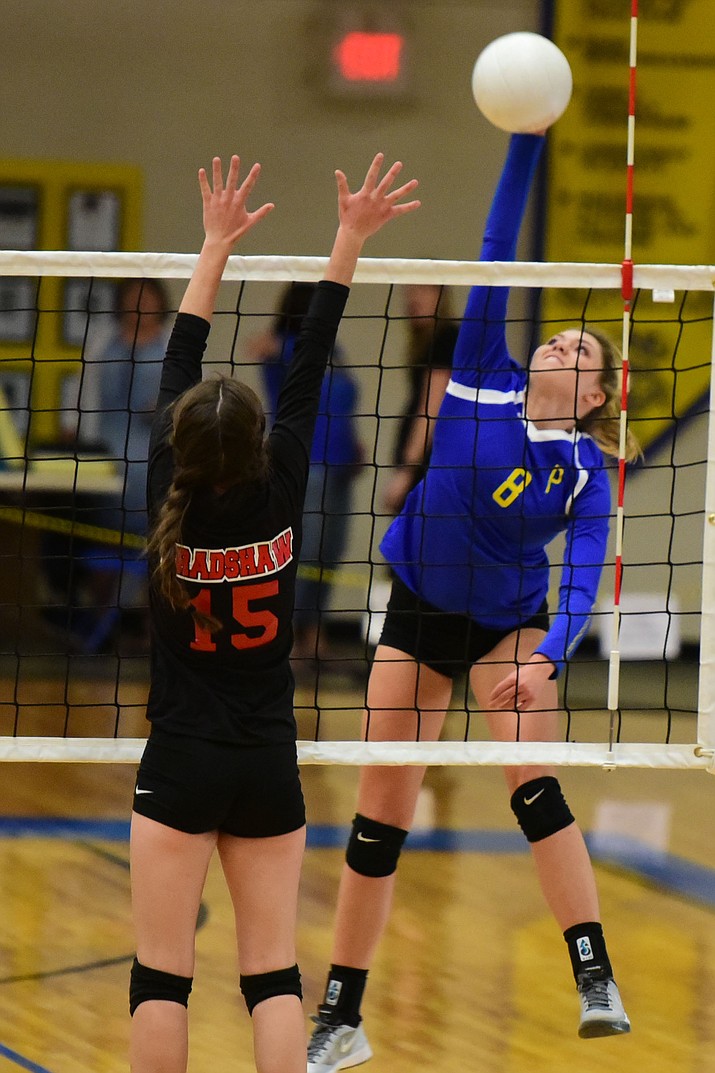 Prescott’s Abbey Smith (8) hits a winner as Randee Clifford (15) of Bradshaw Mountain High goes up to block in this match on Sept. 15. The Prescott Lady Badgers beat the Bradshaw Mountain Lady Bears in a volleyball matchup Wednesday, Oct. 19.

With a 3-0 victory over the Bears, the Badgers remained in second place in the region with a 9-1 record.

Prescott is an impressive 13-1 overall in power-point matches.

The Bears sit in last place in the region at 1-8 and have a 4-10 overall mark in power-point matches.

Prescott has now won five consecutive power-point matches, including four sweeps in region matches, after suffering a 3-1 region home loss to 4A No. 2-ranked Flagstaff (13-1 overall, 9-0 region) on Sept. 29.

The Badgers have only three regular-season matches remaining, two of which are in region, before the 4A State Tournament begins Nov. 2.

The Badgers will then travel to Flagstaff for a top-tier region showdown at 6 p.m. Tuesday, Oct. 25, and return home to face Shadow Mountain in the finale on Thursday, Oct. 27.

Bradshaw Mountain hosts Flagstaff today, Oct. 20, for a 6 p.m. first serve. The Bears will conclude their season next week when they welcome in Lee Williams Oct. 25 and visit Mohave Oct. 27. Both matches are scheduled for 6 p.m.