Chino Valley school board has 2 incumbents, 2 newcomers to choose from 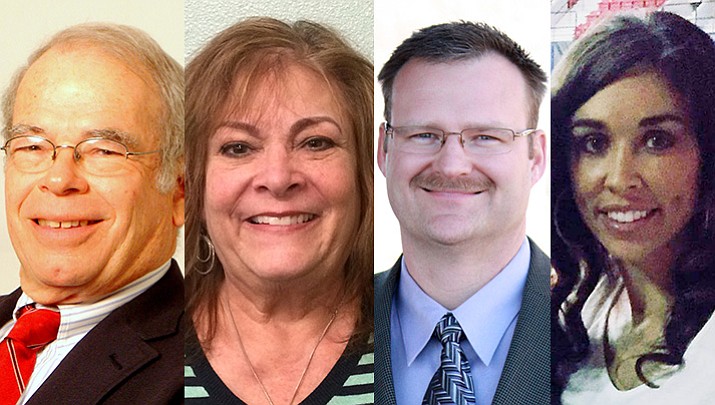 Candidates for the Chino Valley school board are, from left, two incumbents – Governing Board President Peter Atonna and member Sherry Brown – who are being challenged by two newcomers – Robert Bowen and Annie Mortensen.

Voters in the Chino Valley Unified School Districts have the choice of four candidates for three board seats on Nov. 8 – including two incumbents.

The two incumbents – Governing Board President Peter Atonna and member Sherry Brown – are being challenged by two newcomers – Robert Bowen and Annie Mortensen.

Public funding for education and academic accountability and achievement are a focus for many voters in both the national and local elections, and these candidates all have pledged their willingness to remain part of the conversation and advocate for issues, ranging from proper funding to academic standards that promote rigor and student success.

• Peter Atonna, 76, has been the school board’s president for the past two years. Appointed to the board in 2008, he is a retired city planner and has lived in Paulden since 1999 with his wife, Mary Jane. He has been an adjunct professor at both the University of Toledo and Yavapai College, and is a founding member of the Paulden Area Community Organization, serving as president for six years. Atonna said his goals in the next term are to encourage improvement in the quality of education, support of career and technical education, encouraging honors programs, and broadening the scope of academic and enrichment activities. He also wants to continue with realistic budgets.

• Robert Bowen, 42, a local chiropractor who has lived in town for 16 years, is running for his first elected office. He and his wife, Kimberly, have three children – one is a Chino Valley High graduate, one attends CVHS, and one attends a private school. Bowen became a candidate because he wants to have a school district that draws people into the community rather than see them look elsewhere due to public education concerns. “I want to try and continue the growth of our district.”

• Sherry Brown, 69, is a member of the school board, first appointed five years ago. She and husband, David, have lived in Chino Valley for 10 years. She has two adult children and three grandchildren. Brown is a retired elementary and special education teacher who initially ran for the board because she longed to continue being part of the “education circle,” and feels it is important for school boards to have the perspective of an educator on the board. She brings an understanding about curriculum and teaching strategies. “It is very important to connect all of that with students so they have positive outcomes.” She said she is proud of the district’s growth and expansion of academic and vocational offerings to students, and the increase in high school graduation rates. She endorses the four-day school week, a collaborative spirit between district schools, enhanced compensation for faculty and staff, and long-term plans for infrastructure improvements.

• Annie Mortensen, 35, is from a family with deep roots in Prescott, and moved to Chino Valley eight years ago with her husband, Judd, and four children; three of her four children attend Chino Valley schools. This is her first time running for office, and was encouraged to do so by the now-retired Superintendent Duane Howard. She said she recognized there has not been a strong parental presence on the board, and felt someone with an investment in the district could offer a fresh perspective. “I want to get more parents invested.” She served on the bond committee, and through that effort learned a lot about the district.