Chew On This: Mama’s Artisan Pizzeria in Prescott Valley 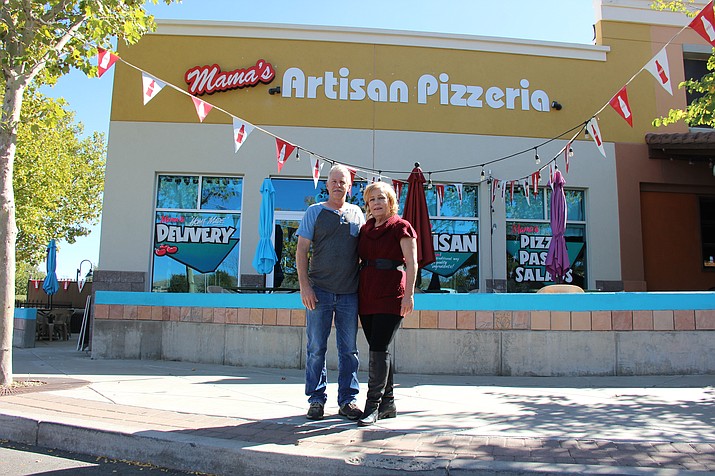 Many may already know about Two Mama’s Gourmet Pizzeria in downtown Prescott.

Parker and her husband, Keith Mantegna, bought out Pikul and her husband, Ron, and the Pikuls ended up taking about a year-long break from the restaurant industry as they figured out their next move.

Last April, they made that move by opening up Mama’s Artisan Pizzeria in Prescott Valley’s entertainment district just a stone’s throw from Harkins Theatres.

While they’ve maintained the gourmet pizza theme, they’ve slightly altered the recipes to make them their own and offer a larger selection of food items.

“We have a kitchen here, which we didn’t have there,” Pikul said. “We only had a pizza oven there, so here we can do more things.”

That includes sandwiches, salads and baked desserts — all of which Two Mama’s now offers as well — and specials that the Pikuls are gradually introducing, such as lasagna, meatloaf and soon-to-come seasonal soups.

However, their staples will always be pizza and wings.

“We make everything fresh here every day,” Ron said. “We don’t use any premade toppings. We don’t buy frozen wings. We get all fresh chicken in.”

Since Prescott Valley is much more spread out than what they were used to in downtown Prescott, the Pikuls have found that delivery is key to their business.

The delivery range is currently from Stone-Ridge to the west, the Prescott Country Club to the east, Viewpoint to the North, and everything in between.

They’re looking to eventually expand even farther as their business grows. The delivery fee is $3, not including a tip.

“We’re trying to cover the places that most of these restaurants won’t go anymore,” Ron said.

Making sure to have a consistent presence at the business in one way or the other, Kathryn will sometimes even do the deliveries herself.

“People will be like ‘oh my God, the owner’s at my house,’” Kathryn said. “Some people even want me to come in and hang out, but I’m like ‘I need to get back to work.’”

The Pikuls haven’t hosted anything like it before, but they plan to have live entertainment on Friday, Nov. 4. Sky Daddy will come out to play on the restaurant’s patio from 5 to 8 p.m.