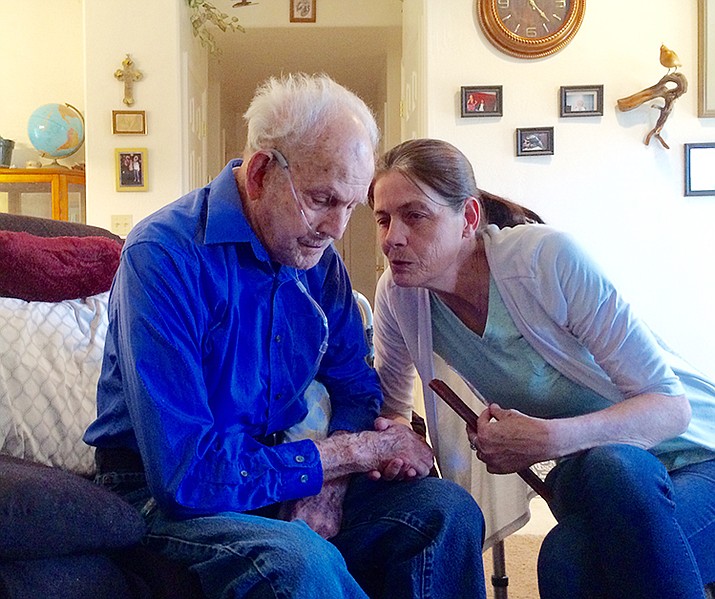 Sally Carter, right, chats with her grandfather, WWII veteran Anthony Bermel, at the Diamond Valley home where she cares for him.

PRESCOTT – “Time waits for nobody.” It is a saying that World War II veteran Anthony Bermel repeats often, and this week, the 98-year-old is living out his own advice by taking part in an opportunity that arose just days before.

Bermel, who served for four years as a U.S. Army Air Corps Flight Engineer in the Central Burma Campaign in World War II, is participating in an “Honor Flight” to Washington, D.C. – one of about two-dozen World War II veterans and Rosie the Riveters.

Sally Carter, Bermel’s granddaughter and caregiver, says the trip came together in a matter of days. Despite the quick turnaround, though, Bermel was up for the trip, she said.

“He always tells us that we need to appreciate what we have, because ‘time waits for nobody,’” Carter said. “He always says that, always.”

Even though Bermel has been ill recently and is currently in hospice, Carter says, “He’s excited about this trip.”

During the two-day excursion, Bermel is scheduled to take in such iconic D.C. sights as the Changing of the Guard at Arlington; the Iwo Jima Memorial; the FDR Memorial; the Vietnam, Lincoln, and Korean memorials; and the WWII Memorial.

The opportunity for the Honor Flight arose after Bermel was unable to board an Oct. 9 Commemorative Air Force B-29 Superfortress at the Prescott Airport.

Bermel, who uses a walker, could not get into the aircraft door unassisted, and ultimately could not participate in the flight.

A Daily Courier article reported his obvious disappointment at the missed opportunity, prompting a number of local advocates to spring into action.

Karen Milani, a care coordinator for Bermel with the Area Agency on Aging (through the Northern Arizona Council of Governments), saw the article, and said, “I felt terrible that he wasn’t able to get on the plane.”

She added: “Here we have this wonderful World War II veteran who is literally there, and he can’t go. It didn’t sit well with me.”

Milani reached out to Susan Howe, the founder of Honor Flight Arizona, about the possibility of having Bermel participate in a coming Washington, D.C. flight.

Coincidentally, Howe says, she was talking with an associate about the fact that several veterans had had to cancel for the Oct. 18 trip at the very time that she got Milani’s message.

“We usually have about 28 veterans, and we were down to 24,” Howe said. She let Milani know what it would take for Bermel to be included in the coming Honor Flight (such as doctor’s permission, and a prescription for oxygen).

“Karen got the paperwork to me right away,” Howe said. “It was pretty amazing it all came together at the last minute.”

Carter says the visit to the WWII Memorial will be especially meaningful for Bermel, because of a decades-old family loss. “He lost his younger brother in the war; they were both drafted in 1941,” she said, noting that Bermel’s brother James E. Bermel died of a ruptured appendix while serving in the Philippines.

Bermel, who grew up in Nebraska with 11 other siblings, moved to California after the war, and worked for the state hospital there, later retiring.

Carter, who is married to Bermel’s grandson Michael, says, “He (Bermel) has been my grandpa for 25 years, 26 years.” She took on Bermel’s care this past April, and the rapport between the two is apparent as Carter leans in close to ask Bermel questions, and prompts him to recall stories about the war.

“Do you remember it all?” she asks him. “Most of it,” Bermel responds.

He recalled, for instance, that as flight engineer, he was in charge of making sure the landing gear on the B-24s was down and locked. He also often served as co-pilot on his many missions in the Burma/China/India – flying over the treacherous “Hump” of the Himalayan Mountains.

“It was pretty rough,” Bermel says of those days. Mostly, he remembers the suffering of the locals. “He talked about how sad it was – people were hungry, wanting money and food,” Carter says.

When she asks, “What is the first thing you think of when you think of the war?” Bermel doesn’t miss a beat. “War is hell,” he responded quickly.

Since Bermel’s move to Prescott this past spring, Carter now spends her days caring for him.

“He’s come a long ways; he’s got glasses, he’s got a hearing aid,” she said, adding that Bermel still gets around the home with his walker.