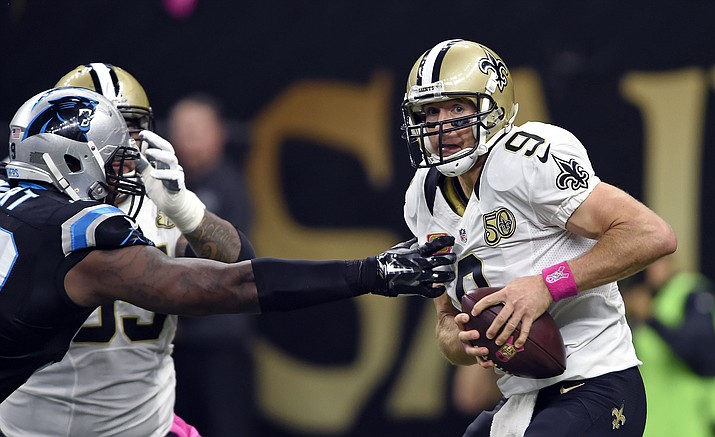 NEW ORLEANS (AP) — Drew Brees passed for 465 yards and four touchdowns, Wil Lutz kicked a 52-yard field goal with 11 seconds left, and the New Orleans Saints pulled out a 41-38 victory over the Carolina Panthers on Sunday.

With his 15th 400-yard game, Brees broke a tie with Peyton Manning for the most in the regular season.

Brees also led the Saints (2-3) to a second straight victory while Carolina lost its fourth straight despite the return of quarterback Cam Newton, who missed last week’s loss to Tampa Bay because of a concussion.

Newton passed for 322 yards and two touchdowns. He also ran for a 2-yard score and threw a 2-point conversion to Devin Funchess that tied the game at 38 with 2:58 left, and completed a comeback from an early 21-0 deficit.

However, he was also intercepted by Sterling Moore in the back of the end zone, stalling a promising drive in the first half — a turnover that came back to haunt the defending NFC champions, now 1-5.

Prescott was 18 of 27, shaking off two fumbles and an interception — the first of his career — to lead the Cowboys (5-1) to their fifth straight win. He showed poise in the fourth quarter while marching the Cowboys on a seven-play, 75-yard drive that ended with a 4-yard touchdown pass to Cole Beasley for an 18-point lead.

The score left Packers fans stunned at Lambeau Field. They were booing at times following another choppy game for the offense. The four turnovers were a season high for Green Bay (3-2).

Even two-time NFL MVP quarterback Aaron Rodgers wasn’t immune from the jeering. Rodgers finished 31 of 42 for a season-high 294 yards.

After watching Matt Ryan blitz the Seahawks for 21 third-quarter points, it was Wilson’s turn in the fourth quarter. He led a 70-yarddrive that was capped by Christine Michael’s 1-yard run with 4:47 left, but a blocked extra point by Ra’Shede Hageman still had Seattle trailing 24-23.

Seattle then got a needed big play from its defense. Ryan’s pass slipped through Julio Jones’ hands, was tipped in the air by Richard Sherman and eventually landed in the arms of Earl Thomas, giving Seattle possession at midfield with 3:48 remaining. It was the first time in the game that Jones was targeted and didn’t make the catch.

Seattle stalled at the Atlanta 26. This time Hauschka was perfect after missing a 29-yard attempt earlier in the fourth quarter, the result of a bad snap.

Ryan was incomplete on his last four throws, including a breakup by Sherman on a long pass to Jones on which the Falcons screamed for a pass interference flag.

In their first game since getting blown out by 29 points in Pittsburgh two weeks ago, the Chiefs (3-2) efficiently handled a Raiders team that had overcome defensive shortcomings with a big-play offense to lead the AFC West.

Smith completed 19 of 22 passes for 224 yards, Jamaal Charles and big defensive lineman Dontari Poe each ran for scores, and the Chiefs forced two turnovers by Derek Carr to dampen a fast start to the season by the Raiders (4-2), who are trying to end a 13-year playoff drought.

Marcus Peters set up Ware’s TD run with an early interception of Carr and Dee Ford forced a fumble from Carr in the fourth quarter to end any hopes of a late comeback.

LANDOVER, Md. (AP) — Kirk Cousins threw for 263 yards and two touchdowns and the Redskins ran roughshod over one of the NFL’s top defenses.

The three-headed running attack of Matt Jones, Robert Kelley and Chris Thompson combined for 231 yards and a touchdown as the Redskins (4-2) won their fourth consecutive game. After starting the season 0-2, Washington has its best record through six games since 2008, when it went 8-8.

The Redskins put up 493 offensive yards against the Eagles (3-2), who came in allowing an average of 266.8 yards and 12.6 points as the league’s second-best defense. Cousins connected with Jamison Crowder on a 16-yard touchdown and with Vernon Davis on a 13-yarder. Davis started at tight end in place of Jordan Reed, who was out with a concussion. Jones ran for a 1-yard touchdown and sealed the victory with a 57-yard run as part of his 135-yard day.

Malcolm Jenkins intercepted Cousins and returned it 64 yards for a touchdown. Philadelphia also got an 86-yard kickoff return touchdown by Wendell Smallwood.

MIAMI GARDENS, Fla. (AP) — Ben Roethlisberger missed one series because of a left knee injury and was held to 189 yards passing.

The Steelers (4-2) had scored 74 points in their previous two games, but were outgained 474-297. Pittsburgh’s Antonio Brown, the NFL’s leading receiver, was held to four receptions for 39 yards. Teammate Sammie Coates, playing with a hand injury, didn’t have a catch.

Roethlisberger had only 83 yards passing with 5 minutes left before he drove the Steelers 97 yards for a touchdown. Miami recovered the ensuing onside kick to seal the victory, and on the next play Ajayi scored on a 62-yard run.

ORCHARD PARK, N.Y. (AP) — LeSean McCoy scored three times and the Bills extended their winning streak to four. McCoy had 140 yards rushing and shook off what appeared to be a frightening injury to his right knee late in the second quarter.

Tyrod Taylor threw two touchdown passes in helping Buffalo (4-2) win four straight for the first time since the start of the 2008 season.

Colin Kaepernick provided the 49ers a spark in his first start in nearly a year. Blaine Gabbert was benched following a 33-21 loss to Arizona, and Kaepernick finished 13 of 29 for 187 yards, including a 53-yard touchdown pass to Torrey Smith. But San Francisco (1-5) couldn’t finish drives, settling for three field goals by Phil Dawson, in losing its fifth straight game.

Kaepernick was the target of numerous boos and chants when he kneeled during the national anthem in continuing his protest against racial oppression and police brutality.

FOXBOROUGH, Mass. (AP) — Playing in his first game in Foxborough since the end of his “Deflategate” suspension, Tom Brady had three touchdown passes and went over 5,000 completions for his career.

Brady finished 29 for 35 for 376 yards. Tight end Rob Gronkowski had seven receptions for a career-high 162 yards and a touchdown.

Cincinnati dropped to 2-4 for the first time since 2010, when it finished 4-12 — its worst season under coach Marvin Lewis.

The Bengals had their moments offensively, scoring on a 2-yard touchdown run by Andy Dalton and 5-yard pass from Dalton to Brandon LaFell. But New England (5-1) bounced back from some sluggish drives early with several big plays in the third quarter.

EAST RUTHERFORD, N.J. (AP) — A banged-up Odell Beckham Jr. turned a short fourth-and-1 pass into a winning 66-yard catch and run with 1:24 to play as the Giants snapped a three-game losing streak.

The win was the 700th in franchise history. Beckham gave it to the Giants with a career day despite going to the locker room with a hip pointer in the second quarter. Beckham returned before the half and made the Giants (3-3) a winner with a spectacular second half. It featured a 75-yard touchdown catch and a 43-yard reception that set up one of Josh Brown’s two field goals.

The Ravens (3-3) lost their third straight.

Beckham finished with eight catches for 222 yards. His late heroics saved the Giants, who were on the verge of a fourth straight loss after Terrance West scored on a 2-yard run with a 2:04 to play, giving the Ravens a short-lived 23-20 lead.

DETROIT (AP) — Matt Prater made a tiebreaking, 34-yard field goal with 1:29 left and Rafael Bush followed with a victory-sealing interception two plays later. The Lions (3-3) have won two straight games with Prater making the winning kick and a defensive back following up with an interception on the ensuing possession.

Case Keenum completed a Rams-record 19 straight passes, but couldn’t connect with Lance Kendricks on the long throw that Bush stepped in front of near midfield. Keenum finished 27 of 32 for 321 yards with three touchdowns — two to Kenny Britt, one to Kendricks — and an interception.

Britt had season highs with seven receptions and 136 yards, 47 of which came on a highlight-reel catch.

NASHVILLE, Tenn. (AP) — Marcus Mariota threw for 284 yards and three touchdowns, and the Titans got their second straight victory — the first time they’ve won consecutive games since the end of the 2013 season.

The Titans (3-3) matched their win total for all of last season when they went 3-13 and wound up with the No. 1 draft pick overall. They also beat a team other than Jacksonville on their own field for the first time since the 2013 season finale and improved to 3-16 in Nashville.

Cleveland (0-6) is mired in its worst start since 1999 when the Browns lost their first seven as an expansion franchise.

CHICAGO (AP) — Blake Bortles threw for 271 yards and hit a slipping Arrelious Benn for a 51-yard touchdown in the closing minutes.

The Jaguars (2-3) wiped out a 13-0 deficit in the fourth quarter in a matchup of last-place teams. And the go-ahead touchdown might have been helped by the oft-criticized turf at Soldier Field.

Benn slipped as he caught a slant and so did Tracy Porter as he tried to tag the receiver. That allowed Benn, who spent the past three seasons on injured reserve, to get up and run untouched for his first touchdown in five seasons.

That gave the Jaguars a one-point lead with 2:49 left and sent the Bears (1-5) to another loss after they dropped the previous game to Indianapolis on a late TD pass by Andrew Luck. Chicago came up short despite racking up 389 yards.

HOUSTON (AP) — Nick Novak made a 33-yard field goal in overtime to give the Houston Texans to a 26-23 comeback victory over the Indianapolis Colts on Sunday night.

Brock Osweiler threw a 36-yard pass to Jaelen Strong to get Houston to the 12 and Novak’s field goal came two plays later.

Indianapolis (2-4) got the ball first in overtime, but Benardrick McKinney sacked Andrew Luck on third down to force a punt.

Osweiler shook off a tough start to throw two touchdown passes in less than 2 minutes in the fourth quarter as Houston (4-2) erased a 14-point deficit to tie it at 23 with 54 seconds left. He found Lamar Miller on a 10-yard catch-and-run TD with 2:47 remaining and, after a stop by the defense, connected with C.J. Fiedorowicz on a 26-yarder that tied it.

Houston’s defense forced a punt by Indianapolis to send it to OT.

Luck had a 22-yard touchdown throw in the first quarter and pushed the lead to 20-9 when he dashed into the end zone untouched on a 14-yard run early in the fourth.

Miller scored his first touchdown as a Texan on a 1-yard run on Houston’s first drive of the second half, but the extra point failed to leave the Texans down 13-9.

The Texans stopped the Colts on fourth down after that, but Osweiler’s pass was intercepted two plays later. Luck’s TD run came on the next drive.

The Colts built led 13-0 in the second quarter after two field goals by Adam Vinatieri and a touchdown catch by Jack Doyle. Osweiler and Houston’s offense struggled to get going and early and Osweiler had negative-9 yards passing in the first quarter. The Texans cut it to 13-3 at halftime on Novak’s 27-yard field goal.