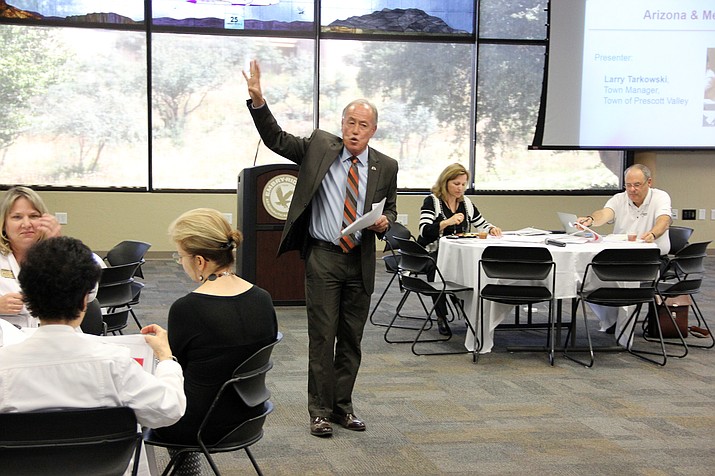 Mexico is the 15th largest economy in the world and is projected to be the sixth largest by 2050, according to a report released by the professional services network PwC.

The country is Arizona’s largest trade partner accounting for $9 billion and more than 40 percent of the state’s exports in 2015, according to figures gathered by Arizona Town Hall.

About 100,000 Arizona jobs depend on this trade, according to the Arizona Department of Transportation.

These statistics and more have given rise to serious discussions among city and state officials on how Arizona and the U.S. as a whole should manage economic relations with Mexico.

For all who attended an Arizona Town Hall community outreach meeting at the Embry-Riddle Aeronautical University campus in Prescott on Wednesday, Oct. 12, the consensus was such relations should be encouraged to prosper.

“We should have twice the amount of economic activity with Mexico as what we presently have,” said Prescott Valley Town Manager Larry Tarkowski during the open discussion.

Tarkowski was one of hundreds of Arizona citizens who attended the 108th Town Hall in Tucson last April titled Arizona & Mexico.

In his presentation to the small gathering of Quad-city residents, he compared Arizona’s economic ties with Canada to that of Mexico.

Despite the fact that Arizona and Mexico share a border, less Arizona jobs depend on trade with Mexico than are dependent on trade with Canada, which is about 1,500 miles away.

“We should be ashamed of that,” Tarkowski said. “When you take a look at the economy growing in Mexico as fast as it is... and you take a look at a middle class in Mexico that is rapidly expanding, those are business opportunities that we certainly ought to be harvesting.”

Tarkowski and other speakers went over several of the reasons they believe economic progress with Mexico has been stymied. They concluded that much of it has to do social barriers, such as residual tensions surrounding SB 1070.

More formally known as the Support Our Law Enforcement and Safe Neighborhoods Act, SB 1070 is a piece of Arizona legislation passed in 2010. It was considered the broadest and strictest anti-illegal immigration measure enacted by a state in many years. It has since been largely invalidated by Arizona courts, yet has not been repealed.

Eric Marcus, Executive Director for the Sustainable Economic Development Initiative (SEDI) of Northern Arizona, said although SB 1070 is now essentially hollow legislation, it remains symbolic and should be completely eliminated.

“At this point [repealing it] sends a message to Mexico that we’re open for business from you; we want to welcome you,” Marcus said. “We need to make sure that businesses and people in Mexico know that we want them.”

State Rep. Noel Campbell, R-Prescott, was also in attendance and quickly addressed this matter when he received the opportunity to speak.

“I’m in the legislature and can pretty much tell you that SB 1070 is not going to be rescinded, at least not in the foreseeable future,” Campbell said.

By the end of the meeting, Marcus — who was also serving as the meeting’s recorder for AZ Town Hall — had compiled a number of recommendations the group believed were most pertinent for Arizona to address.

Excluding the recommendation to repeal SB 1070, they were:

• Sister city and similar exchange programs need to be renewed and expanded.

• We need to promote Spanish language education throughout our educational system. More Arizonans should be bilingual.

• We need to work with the federal government to increase staffing at the ports of entry in order to increase throughput.

• We should work on expanding the existing border crossings zone to include the state of Arizona, But we should not underestimate the challenge of getting our own federal government to agree.

• Texas has made major in-roads in advancing trade with Mexico. Arizona should look at what Texas did that has been successful in working with the Mexican federal government.

• Arizona, and the country as a whole, needs a strong and prosperous Mexico.