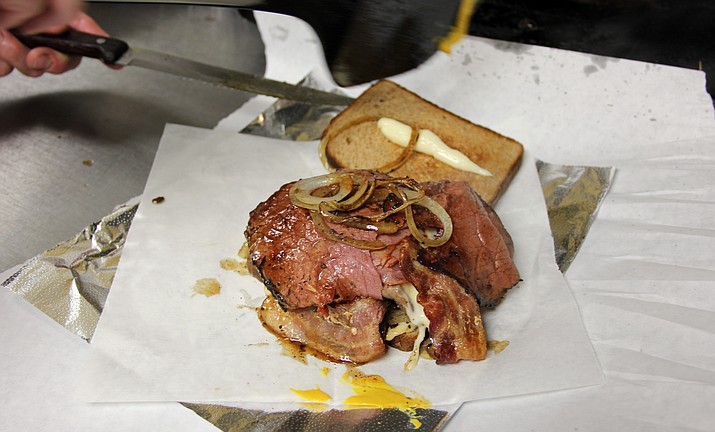 Speed's Hangar Deli is located at 1030 Sandretto Drive in Prescott.

Plastering the interior walls of Speed’s Hangar Deli are military and aviation-related memorabilia. Nearly every item is imbued with meaning and comes with a story.

“That tall picture came from one of my female customers,” said the deli’s owner/operator, Debbra Kovacs, while pointing to an item on one of the walls. “That’s her sniper platoon in Afghanistan.”

“This was given to me by a non-vet,” pointing to another photo of a blown-up bunker. “That was a bunker he was about to go into before someone called his name.”

A glass case beneath the register is filled with military patches, all donated by hungry customers.

“I’ve had guys take it right off the uniform and say they want it in here,” she said. “They come in and realize it’s not décor, it’s for real and for them. I do all of this to honor the troops, not glorify war.”

Such community appreciation and investment in the New York-style deli are just a couple reasons it has remained a go-to for many locals in the area for 24 years.

Another reason is the food.

Kovacs is originally from Long Island, New York, and does almost all of the cooking for the joint herself. Anything that doesn’t come straight out of her kitchen consists of strictly high-grade ingredients, she said.

“It’s real stuff,” Kovacs said. “I make my own meatballs, I cut my own steaks, I cut my own chicken, I make my own spaghetti sauce. The prosciutto is all natural with no nitrates. The salami has real wine in it, not vinegar.” The list goes on-and-on.

With this love and flavor comes a price. Most of the sandwiches go for about $10 — not including chips, drink or a side.

“You’re paying for what you get,” she said. “This isn’t fast food. Some places sell price, I sell product.”

These products aren’t light either, literally.

And that heft comes mostly from meat for a majority of the sandwiches. The “Fatman” sandwich ($10.95), for instance, is a popular choice that comes with grilled roast beef, capicolla, bacon, pastrami, onions, provolone and mozzarella cheese. Another one called “Little Boy” ($10.25) comes with grilled patrami, ham, turkey, tomatoes, onions and melted mozzarella cheese.

“I like their meats and how authentic it tastes,” said patron Andy Wilson.

“The aroma in this place too when you walk in; it’s just fresh,” added Wilson’s friend James Gallaher.

Like most true delis, the meats and other deli counter items, such as homemade mac-n-cheese or coleslaw, can be purchased by the pound.

Active duty military and Embry-Riddle students get about a 7 percent discount on their purchases.

“You get it for Riddle because of me being a graduate and you get it for military because if you can be shot at, I can give you a discount,” Kovacs said.

Though it’s a friendly environment, if someone decides to get out of hand with their remarks about this, that and the other thing, Kovacs has no problem showing them who owns the place.