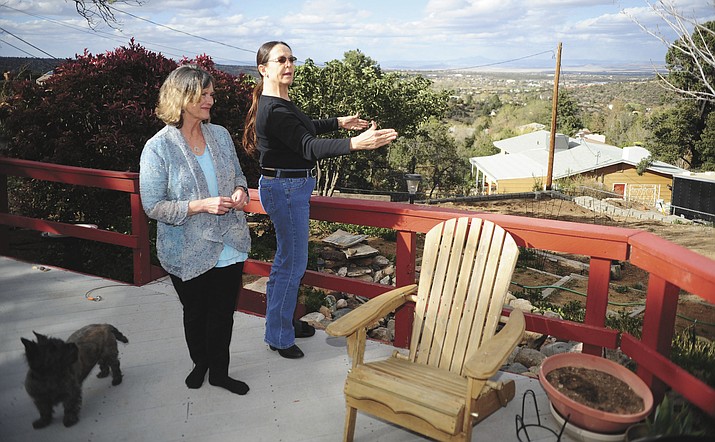 In this March 2016 file photo, Nancy Paola and her neighbor Millie Owens talk about their concerns about possible group homes in their neighborhood.

PRESCOTT – Months of intense Prescott City Council discussion came to a conclusion this week with a quick and unanimous vote to approve a new ordinance regulating structured sober-living homes.

With virtually no council discussion or comments from the public, the council approved the ordinance at its Tuesday, Oct. 11 meeting.

The ordinance will now go into effect on Jan. 1, 2017 – in conjunction with the city’s newly approved business license program.

The details of the ordinance had been hashed out over the past several months, as the council considered how best to regulate the 100 or so sober-living homes believed to be operating within Prescott city limits.

When the matter last went before the council in late September, a majority of members voiced support for requiring the sober-living homes to have a manager awake 24 hours a day, seven days a week.

Although the original draft ordinance had allowed for other options, such as an alarm system, council members instructed the city legal department to eliminate those options.

Along with the 24/7-awake requirement, the new ordinance will, among other things: Set standards for training, criminal background, and education of the managers of the houses; require existing homes to apply for a license within 60 days of the effective date of the ordinance; require basic address, employee, and operational information about the home; and require a discharge-planning strategy for residents of the home.

The new ordinance also will require that: All residents, other than the house manager, actively participate in recovery programs; homes assure that all residents have access to meals at the home; that homes have a protocol to prevent locking residents out of the home, unless the residents are at work or engaged in some other activity outside the home.

The city ordinance, which City Attorney Jon Paladini has noted is the first of its kind in Arizona, will follow through on the state law that became effective in August, which allows cities, towns, and counties to more strictly regulate structured sober-living homes.

Arizona Rep. Noel Campbell, R-Prescott, who sponsored the original bill for the state law, earlier urged the city to impose a 24/7-awake requirement for house managers.