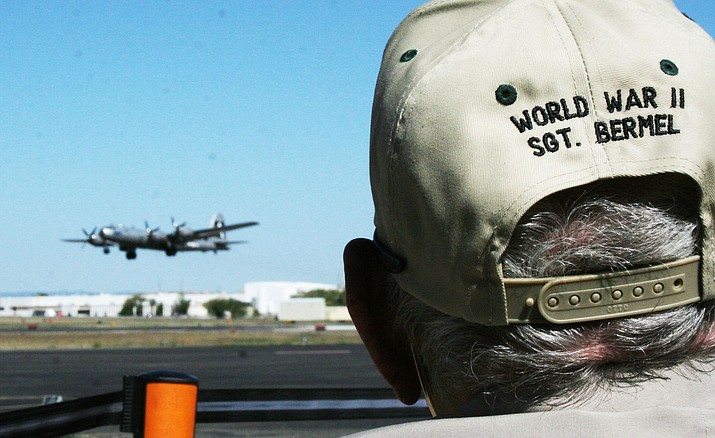 PRESCOTT – A single tear ran down the face of Sgt. Anthony Bermel, retired from the U.S. Army Air Corps.

The World War II veteran, now 98 years old, was excited to have the opportunity to fly in “Fifi,” the Commemorative Air Force’s B-29 Superfortress, which had been visiting Prescott for the past week. 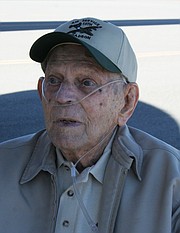 Bermel was once a Flight Engineer in the B-24 Liberator, flying missions over Burma, North Africa, and China.

His granddaughter, Sally Carter, who now takes care of him, said he had been watching old films of the war and could barely sleep once he was offered the chance to fly in Fifi on Sunday, Oct. 9.

But when they arrived at Prescott Municipal Airport Sunday morning and rolled up to the aircraft, Bermel, who also uses a walker, was able to walk up to the ladder that provides access to the big bomber, and even climb it, but he was unable to get into the door unassisted.

Bermel would not fly Sunday.

The ability to get into the plane by oneself, the flight crew’s Safety Officer, Stuart Watkins, said is a cardinal rule for passengers. “That gentleman did pretty well but then couldn’t actually pull himself into the aircraft, (and) wouldn’t have been able to get himself out. That would have been a major safety problem.

“It’s sad, but we have to maintain our safety standards for the benefit of everybody,” Watkins said.

The crew helped Bermel as much as they could, but finally had to admit he couldn’t fly.

Bermel had to settle for a tour of the exterior of the plane and photos with the crew.

As Sally’s husband, Michael, rolled Bermel back to the spectators’ area, the veteran teared up, but said nothing.

“He tried, he gave it his all, God bless him,” said Mary Mount, one of the crew members.

“There’s not very many of these guys left around,” Michael said. “It’s been 70 years since he’s been around” a World War II vintage airplane.

Bermel has had a rough time in his twilight years. Sally explained that she and Michael had just taken him in six months ago.

“He came from a really bad place in California where he was abused,” she said, and his life savings, over a million dollars, was stolen. “When we got him, he had $3.54 in his bank account.

“He deserves everything in the world,” Sally said. “And he really wanted this flight.”

When he arrived at the waiting area, the crowd broke into applause.

Sally turned his wheelchair so he could see Fifi’s engines come to life with large puffs of smoke and taxi down to the end of the runway.

He watched as the big bomber lifted off and then Sally rolled his wheelchair away.

“I guess we waited a little bit too long,” she said.