Jimmie Johnson moves into 3rd round of NASCAR’s playoffs 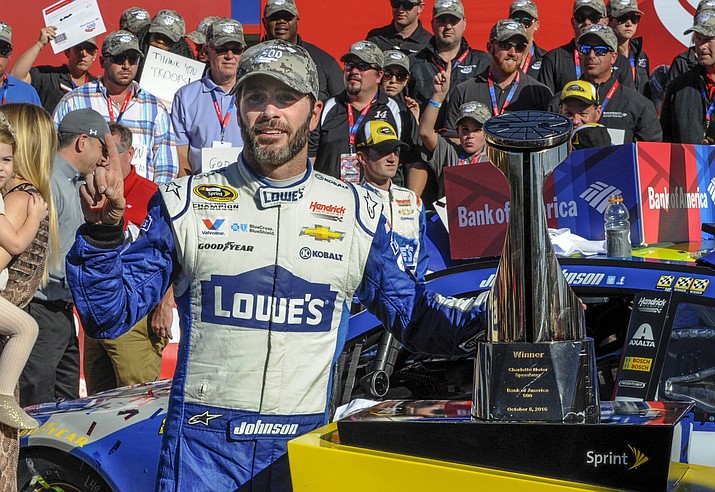 CONCORD, N.C. — Stuck in the longest losing streak of his career, Jimmie Johnson had a chance for a critical win that could salvage this ho-hum season for Hendrick Motorsports.

Hardly a championship contender for most of this season, Johnson grabbed a victory at sun-soaked Charlotte Motor Speedway when nearly half the title contenders had horrible days.

The win Sunday was his third of the season, but snapped a 24-race losing streak dating to March. Johnson is the only Hendrick driver to visit victory lane this season, and this win earned him an automatic berth into the third round of the playoffs.

It's the first time Johnson has made it out of the second round since the elimination format was introduced in 2014. He was knocked out at Talladega in the second round of the inaugural season, and was bounced in the first round last year.

Suddenly, the six-time NASCAR champion is a realistic contender for that elusive record-tying seventh title.

"We can't sit back and celebrate too much on this," Johnson said. "We've got to buckle down and get to work tomorrow and keep advancing our race cars. But this does buy us a couple weeks of freedom."

The race was originally scheduled for Saturday night, but Hurricane Matthew washed out nearly the entire weekend and set up an 800-mile doubleheader of the Sprint Cup and Xfinity Series on Sunday. When the racing finally began on a beautiful North Carolina afternoon, it immediately shaped up as a Hendrick kind of day.

Johnson and Chase Elliott dominated the race, running 1-2 for a long stretch, and a Hendrick victory all but guaranteed based on the speed the Chevrolets showed. Elliott, though, was one of five Chase drivers to finish 30th or worse, and it was Johnson who had to carry the flag.

The win came on the 15th anniversary of Johnson's debut in Cup for Hendrick, which was at Charlotte, and was his eighth career win at the track.

"Nobody ever gave up, and you know, we know what a champion Jimmie is," team owner Rick Hendrick said.

Johnson has quietly turned up his performance in the Chase and became an official title contender as the first driver qualified for the next round. He led a race-high 155 laps Sunday, and in four Chase races this season, he's led 363 laps and hasn't finished lower than 12th.

"Be curious to look back, I guess, and see if these are all new cars that they're bringing," said reigning champion Kyle Busch. "Obviously, if it is, then they've found something that they've been waiting out and holding out on us. That's to be expected, though, man. That's what this sport is all about."

Johnson certainly figured it out on a day when six Chase drivers had trouble.

Denny Hamlin and Kevin Harvick both had engine issues. Austin Dillon and Elliott were in accidents. Joey Logano had tire problems, and Martin Truex Jr. had an electrical issue as he left pit road after the final pit stop.

Five Chase drivers finished lower than 30th, and Harvick, the 2014 champion, is last in the standings.

Hamlin was running second when his engine blew with 25 laps remaining. As the cars left pit road, Truex seemed poised to restart in second, but he appeared to stall and instead restarted 16th.

Although Truex salvaged his day and finished 13th — lowest of the Chase drivers still running at the end of the race — Hamlin wound up 30th.

The hectic day left only Johnson breathing easy at the end. Not even Matt Kenseth, who finished second to Johnson, is relaxed heading into races at Kansas and Talladega.

"Would love to have the win, would make you feel a lot better about the next two weeks," Kenseth said.

HENDRICK RETURNS: This had been a miserable season for Hendrick Motorsports, by its own standards. Only two of its four drivers made the Chase this year and Dale Earnhardt Jr. is sidelined with a concussion.

Johnson has the only wins for the organization, but Elliott had been sniffing victory lane all season.

Elliott was involved in an accident with 75 laps remaining and could not hide his disappointment. "We had such a good car," he said. "I'm devastated that we didn't get the result that my guys deserve."

Despite Elliott's finish, it was a good organizational day for Hendrick: Kasey Kahne finished third and Alex Bowman showed early speed before a tire issue caused him to wreck.

HAMLIN WOES: During a lengthy red-flag, NBC Sports interviewed Hamlin while he idled in his car and said he was just cruising along for a strong finish.

Then his engine blew up and a strong points day was ruined.

It was Hamlin's first engine failure since Talladega in 2013, and he noted afterward that he's always hit with bad luck during NASCAR's postseason.

"It's just my time and it's usually Chase time when I have these things happen," he said. "I've been doing this 11 years and I can't name anyone else who has had as bad of luck as I have in the Chase."

DILLON GAMBLES: As the long shot in the field, Dillon likely needed tremendous luck or a stroke of strategic planning to advance out of the second round. His team gambled on a late pit stop in taking only two tires, a move that earned him nine spots and into second for a restart.

He seemed to get off cleanly at the drop of the flag, but as he shifted, he was hit from behind by Truex and spent spinning into an interior wall.

Truex accepted blame for hitting Elliott in a frustrated communication over his team radio.

"I tried to give him a shot and just turned him around like a damn idiot," Truex radioed.

Dillon, a rookie in the Chase who is winless so far at the Cup level, figured he needs to get a victory in one of the next two races.

"We will have to work hard the next two weeks to get the points back," he said. "We just have to do a lot, we have to win one of the next two races."