Days Past: Kate Cory - Artist and Ethnographer of the Hopi People - Part Two 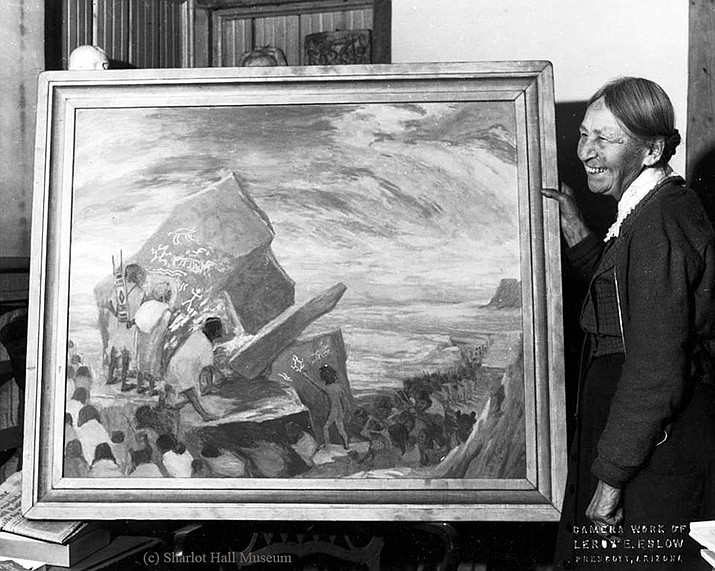 Living among the Hopi (1905 - 1912), Kate Cory gained an appreciation and intimate understanding of Hopi culture. Daily life was simple, but their complex spiritual life and colorful ceremonies were unique. Kate’s photographs, paintings and writings leave us today with a vivid picture of the color and mystery of the Hopi Nation.

One such mystery is the role of the Katsina spirits who come down from the San Francisco Peaks to guide the successful cycle of the seasons. Kate documented the Hopi men impersonating the Katsinas in ceremonies which began with the winter solstice and occurred regularly until mid-July, when the Katsinas return to the mountains.

Beyond the ceremonies, Kate photographed and studied Hopi people in their homes and day-to-day activities - children learning and at play, women cooking and weaving, men working the fields. A book containing some of her work: The Hopi Photographs, Kate Cory: 1905-1912, can be found at the Prescott Public Library.

While in Oraibi, Kate witnessed a split between two groups of Hopi: one group willing to assimilate into white culture; the other committed to maintaining traditional Hopi ways. Ultimately, the dispute forced those unwilling to assimilate to move to an abandoned ruin. Kate said, “I was present at what was probably the last migration of the Indians when in 1906, because of two warring factions in the tribe, one threw the other out. . .” Kate’s moving portrait of the migration is at the Smoki Museum.

In 1909 Kate showed her painting Feather Ceremony in San Francisco, to wide acclaim. It depicted a winter event, largely unknown to tourists. Today, the painting is at the Smithsonian American Art Museum.

By 1912, Kate was ready to leave the reservation. Her age and the primitive conditions were taking a toll. Plus, the Hopi and the government were placing more and more restrictions on her activities. She painted a farewell to the Hopi: “Return of the Kachinas,” a mystical picture of the Katsinas returning to their mountain home after a visit to the village. This painting is at the Smoki Museum.

Her friend Louis Akin suggested Prescott as a good place for an artist. In 1912, at the age of 51, Kate moved into her little pueblo style house in the Idylwild Tract on Thumb Butte Road. She continued to live simply; a vegetarian, she tended a garden and cooked on a wood stove.

She fulfilled commissions for private collectors as well as the Santa Fe railroad. Her paintings garnered State Fair awards and national recognition. Her painting “Arizona Desert” was shown at the groundbreaking 1913 Armory Show in New York.

During WWI, she returned east and worked in a Women’s Land Army garden project raising vegetables for the war effort. She also experimented with camouflage techniques and tested materials used in the construction of aircraft designs.

After the war, Kate joined Sharlot Hall working in the “Way Out West” program, intended to help preserve Native American customs and to raise money for the Frontier Days Rodeo. This organization introduced the Smoki People, townspeople who performed in reenactments of native ceremonies. Kate was an advisor and designed some of the costumes. Sharlot wrote the book The Story of the Smoki People; Kate did the illustrations.

In 1929, Kate was asked to paint Black Canyon before it was altered forever by construction of Boulder Dam. A reporter for the Mohave Miner commented on her painting, “Boulder Dam Damsite” -- “Miss Cory portrays the Black Canyon site in all of its varied colorings and the picture shows the wonderful canyon in all its majesty.”

In Prescott, she gained a reputation as an eccentric spinster. Her church family at the First Congregational Church was concerned for her welfare; she was thin and dressed in old, worn clothes. Possessions were not important to Kate; she often shared or gave away what she had.

At the age of 97, after a life well spent in pursuit of her art and service to others, Kate Thomson Cory passed away at the Pioneer Home in Prescott on June 12, 1958.