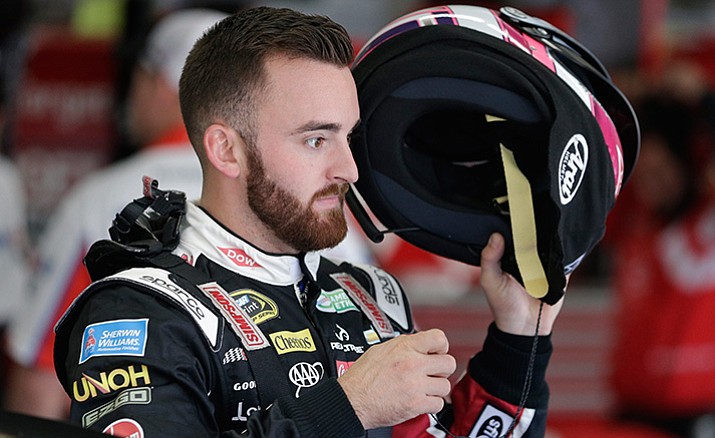 CONCORD, N.C. — Of the 12 drivers remaining in NASCAR's playoffs, the odds makers have ranked Austin Dillon last in the championship race.

Very few expected him to make it out of the first round. Only he did make the cut, and now Dillon intends to creep even further into the Chase for the Sprint Cup championship.

"I like this role," Dillon said of being a longshot, "because it puts the pressure on the guys that I guess are projected to make it to the next round — whatever projections mean."

This is Dillon's debut in the Chase and he went into last weekend's elimination race at Dover in danger of being bounced from the field. But he stepped up with a strong eighth-place finish — his first top-10 in six weeks — and advanced into the round of 12.

He'll start 19th on Saturday night at Charlotte Motor Speedway, the opening race of the second round of the Chase. Rain from Hurricane Matthew washed out all track activity on Friday, but Dillon, like most teams, used Thursday to prepare for the race.

"We had a good car in practice. We just missed our balance a little bit" in qualifying, Dillon said. "We'll be fine. I'm really happy with our Chevrolet."

Although his results have been mediocre — Dillon was 14th at Chicago in the Chase opener, then 16th at New Hampshire — he did what he had to do at Dover while the drivers ahead of him in the standings struggled.

Jamie McMurray and Kyle Larson didn't make the round of 12, and Dillon capitalized with his Richard Childress Racing team. He has no doubt it can happen again in the second round, which includes Charlotte, Kansas and Talladega Superspeedway.

"You just never know what can happen in a race and you never know what the outcome will be," he said. "There is so much that goes into every little piece and part of these cars. I'm confident in the company I drive for with RCR and the people around me, myself also, that we can make strong finishes and that is what I'm confident about. I love the underdog role because that means when we do knock people out, it's going to be fulfilling."

Dillon could surprise some at Charlotte, where he finished seventh in this race a year ago. The RCR organization is also accustomed to working the system of the Chase to its benefit.

Ryan Newman two years ago advanced into the championship race through points racing instead of chasing wins. Dillon understands there's a strategy that can be followed for success in the Chase. Everyone wants to get through Charlotte and Kansas next week in solid shape to not have their fate decided at Talladega.

As the only RCR driver in the Chase, he's got the organization behind him.

"I had multiple guys come up to me in the shop this week telling me how proud they were and proud to be a part of RCR," Dillon said. "You saw what Ryan Newman was able to do a couple of years ago and go to Homestead. (Newman crew chief) Luke Lambert came up to me and said, 'Man, you guys are built for this just like we made our run.' I hope we can back it up and keep ourselves relevant."

Truex dominates at Dover for 2nd Chase victory of season
NASCAR: Busch spoils Elliott’s run at Dover
Jimmie Johnson moves into 3rd round of NASCAR’s playoffs
Harvick wins at New Hampshire to advance to 2nd round of Chase
Blaney beats Newman in photo finish to advance in playoffs
Event Calendar