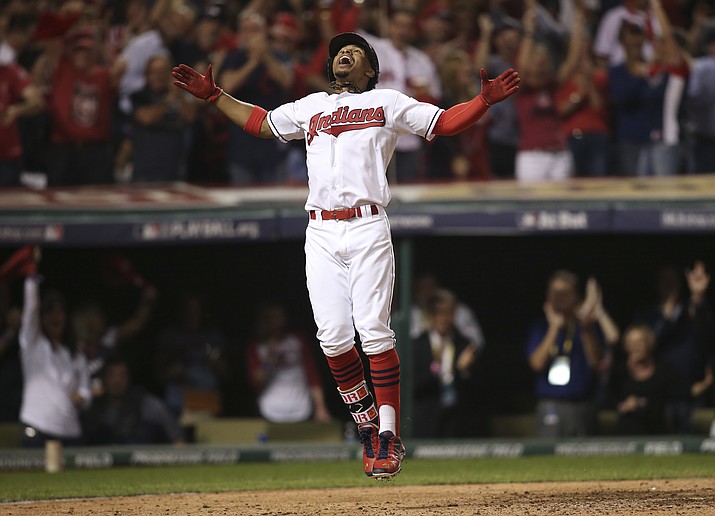 CLEVELAND — Francisco Lindor’s homer capped Cleveland’s three-homer rampage in the third inning against 22-game winner Rick Porcello, and the Indians held on for a 5-4 win over the Boston Red Sox on Thursday night in their AL Division Series opener.

Lindor, Jason Kipnis and Robert Perez went deep in the third off Porcello, who lasted 4 1/3 innings in his shortest outing this year.

Before a sea of red-towel waving, screaming fans, the Indians landed the first blow in the best-of-5 series against David Ortiz and the AL East champions.

Andrew Miller, acquired by Cleveland in a July trade for an October night like this, pitched two scoreless innings for the win. Summoned by manager Terry Francona earlier than usual, the lefty struck out Ortiz with two on to end the fifth and threw a season-high 40 pitches.

Bryan Shaw gave up a leadoff homer to Boston’s Brock Holt in the eighth that made it 5-4 before Cody Allen struck out Xander Bogaerts with the potential tying run at third to end the inning. Boston put a runner on with two outs in the ninth but Allen fanned Dustin Pedroia on a full-count checked-swing, his 40th pitch, for the save. Pedroia was livid, and Red Sox manager John Farrell went onto the field to question plate umpire Brian Knight.

Ortiz went 1 for 4 with a double in the first game of his final postseason.

Rookie Andrew Benintendi and Sandy Leon also homered for the Red Sox, who will start David Price in Game 2 in the shadows Friday afternoon against Cleveland ace Corey Kluber.

Cleveland unloaded on Porcello in the third, connecting for the three homers in a nine-pitch span.

Perez started the salvo with just his second homer in 82 at-bats at home this season. One out later, Kipnis drove a pitch over the wall in right-center, giving Cleveland a 3-2 lead and sending the raucous crowd of 37,763 into delirium. Kipnis had just finished getting a celebratory ride through the dugout when Lindor’s shot to right barely cleared a leaping attempt by Mookie Betts.

Porcello was clearly rocked by the barrage, and as Progressive Field shook, Boston’s infielders gathered around their ace, who went 11-2 after the All-Star break.

Leon’s homer pulled the Red Sox to 4-3 in the fifth. Francona, who won two World Series with the Red Sox before coming to Cleveland, pulled starter Trevor Bauer for Miller, who hadn’t come in earlier than the sixth all season.

Miller gave up a double and walk before getting Ortiz to swing at a low third strike. Cleveland tacked on another run in the fifth, helped by Perez’s alert baserunning. The slow-footed catcher tagged and took second on a fly to left and scored on Kipnis’ single to make it 5-3.

Before the game, Farrell was confident Benintendi could handle October’s stage following his rapid rise through the minors — he skipped Triple-A.

Benintendi didn’t show any nerves in his first postseason at-bat, jumping on Bauer for a leadoff homer in the third for a 2-1 lead.

The enigmatic Bauer, who began the season in the bullpen, was in trouble in the first inning but emerged from a two-on, none-out situation only down 1-0. With two runners at the corners, the right-hander struck out Mookie Betts and retired Ortiz on a foul pop.

Hanley Ramirez followed with a single, scoring Pedroia. Holt tried to score from first, but was thrown out at the plate on a relay from shortstop Lindor to Perez, whose sweeping tag caught Boston’s third baseman on the knee.

Holt was initially called safe, but Francona challenged and it was overturned by replay.

Red Sox: All-Star knuckleballer Steven Wright, bothered by bursitis in his right shoulder for weeks, will pitch Saturday at Fenway Park. If all goes well, he will head to the Instructional League and could be added Boston’s roster if the Red Sox advance.

Indians: RHP Danny Salazar (strained forearm) was sent to the team’s training complex in Goodyear, Arizona, to build up his arm strength. Salazar has been out since Sept. 9. He, too, could be available in the next round.

Price is 0-7 in the postseason as a starter, a mark that has tarnished the five-time All-Star’s splendid career. Kluber will be pitching on 10 days’ rest. He strained a quadriceps last month and the Indians skipped his last start to give him extra time.