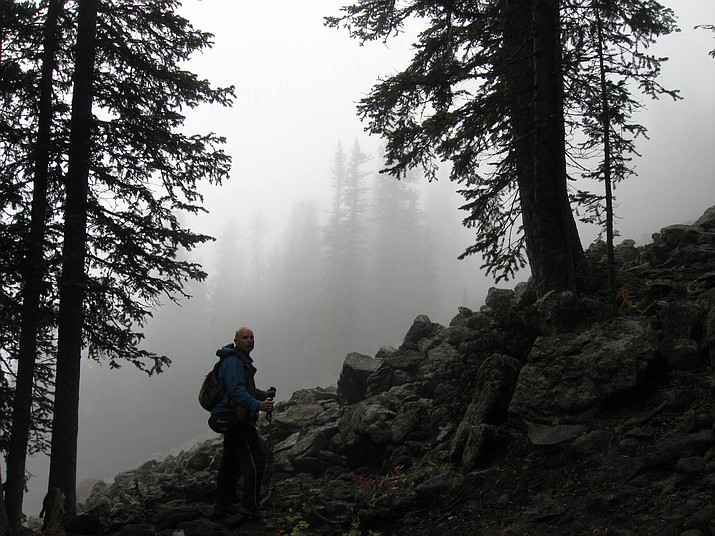 A hiker explores the trails near the San Francisco Peaks on an inclement day. (Ted Johnson/PV Public Library)

Tune in on your next hike with all your senses so you don’t miss something grand and that’s important.  This experience was thrust upon me on the first day of fall, as I set out on a 20-mile loop trail on the southwest side of the San Francisco Peaks near Flagstaff.  Beginning at the Snow Bowl, my goal was to hike east on the Summit Trail (Tr. 151) to the notch at timberline, then circle around to the south on the Weatherford Trail (Tr. 102) and return to the trailhead via the Kachina Trail (Tr. 150).  I knew the weather was questionable but was hoping for some clearing as I proceeded.  Hikes don’t always go as planned, however.

The clouds lowered rather than lifted.  Visibility was reduced to a few feet.  The winds picked up and that’s when my senses went into high gear.  I wore a rain parka but my legs and boots were not water proof.  It wasn’t long before I felt a distinct ‘squish-squish’ with each step.  I thought I was walking on sponges, soaked with rainwater.  In addition to the wind, I heard two distinct sounds of rain falling on my Gortex parka: ‘plop’ and ‘splat.’  ‘Plop’ was made by large drops of water which the trees let loose since they just couldn’t hold on to it any longer.  Looking through the branches in just the right light rivaled the most ornate Christmas tree lights.  ‘Splat’ was made by rain drops that had managed to slip through the trees unimpeded.  As the rain continued, I heard a faint trickle.  A very small stream had formed on the trail as it channeled the rain and runoff.  Puddles formed and the raindrops hitting the puddles added to the watery chorus.  What about that distinct ‘thud?’  Spruce cones were raining down too, dislodged from high in the trees by the wind.  As a desert rat from Bisbee, I appreciated the unusually wet conditions.  Not all that my senses picked up was positive, however.  A thoughtless hiker left an ugly banana peel on the trail.  Unbelievable!  You’d think one hiker would be considerate of other hikers who hike “to get away from it all,” not to find somebody’s garbage.

Great views are often the reward for hiking at such high elevations.  Not this time.  With visibility cut off, I began to focus more on my immediate surroundings.  While the display of gorgeous yellow aspens was just getting underway, the varied colors of autumn were scattered about.  Red bane berries and sumac leaves popped up between brown logs with bright green moss.  Yellow goose berry leaves stood out since so few aspens had turned color yet.  But it won’t be long.  Therefore, the Town of Prescott Valley is offering a fall color hike to this same area on October 13.  The nominal cost of $10/person covers transportation.  So, space is limited.  Call Parks and Recreation to check on availability (928-759-3090).

Sensory rich hiking involves perceiving what is not so obvious, like that grouse hiding in the branches of a spruce tree.  It made not a sound but waddled up the trail ahead of me until it scurried for cover, sensing I was too close for comfort.  Then a daring squirrel darted across my path without making a sound, which was in stark contrast to the chatter boxes I heard earlier in the day.  I chatted with a few other hikers that day too.  High winds above tree line dominated the conversation.  Hiking through the forest was relatively calm, but once I reached alpine conditions beyond the bristle cone pines, my senses sounded the alarm.  In fact, I decided that my clothing was not a good match for the conditions and I retreated.  I shall return and hopefully, you and a few others will join me as we enjoy the beauty of golden aspen leaves floating all around us on October 13, as we wander along the Kachina Trail for five or six miles.  So much to see, feel, hear, and experience.  The most satisfying hikes involve all our senses and that’s a hike worth sharing.

Johnson: Exploring Weatherford Loop, be prepared
Column: My journey to the summit of Humphrey’s Peak
An afternoon in Flagstaff can be a lofty experience
Johnson: New Mexico’s high point is Wheeler Peak
Rains don't mean we let up on forest safety<BR>