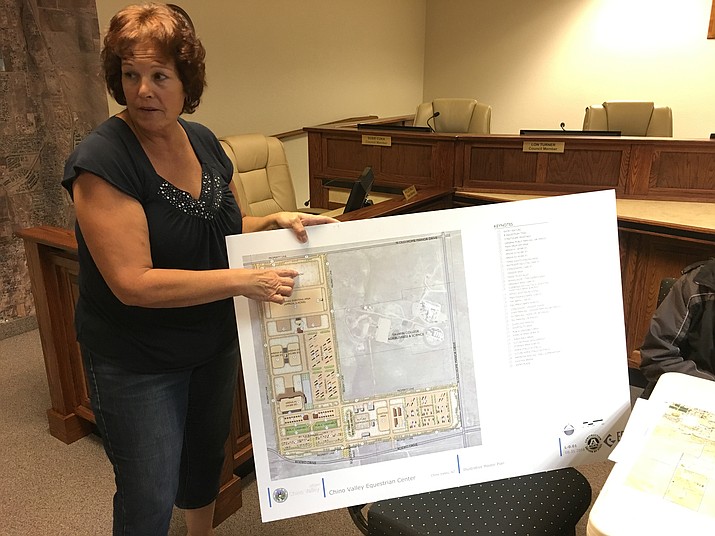 Danielle Feller shows plans for the Chino Valley Equestrian Association's new facility at Old Home Manor. The equestrian park should be able to stage events as early as the spring.

The master plan and a five-year lease for the new, reconfigured Chino Valley Equestrian Center at Rodeo Road and North Old Home Manor Drive were approved by Town Council on Tuesday, Sept. 27, paving the way for it to break ground soon.

In a 7-0 vote, council called for a 20-year lease for the center, which Chino Valley Equestrian Association members say will likely be built in three phases and accommodate large horse shows and competitions.

The Equestrian Center plans to open in April 2017, with weekend activities slated from April through October. Multiple arenas will be equipped to accommodate equestrian sports such as barrel racing and horse jumping. Martinez said a recreational vehicle (RV) facility is being proposed at the center and that a tree-lined trail system will wrap around it.

Originally, the center was to be built on a rectangle-shaped piece of property south of Rodeo Drive and west of Old Home Manor Drive.

CV Equestrian Association treasurer Danielle Feller said the site for the new center is “a much better set-up for us with a quieter location.” The new site also features existing infrastructure with a well and a modular building that the association will temporarily share with the town.

The Equestrian Association approached council in March about building a new center and met with council again in late June. That’s when the center’s location changed slightly.

Town buildings located on the new site include a modular office building (originally used by the town’s now-defunct rodeo association) and a Quonset hut that the Equestrian Association will lease 50/50 with the town and its public works department.

Michael Lopez of Chino Valley Public Works said the town plans to vacate those buildings within five years and relocate to a spot near the town’s wastewater treatment plant.