Too much work to return ‘Lady’ to top of plaza's fountain 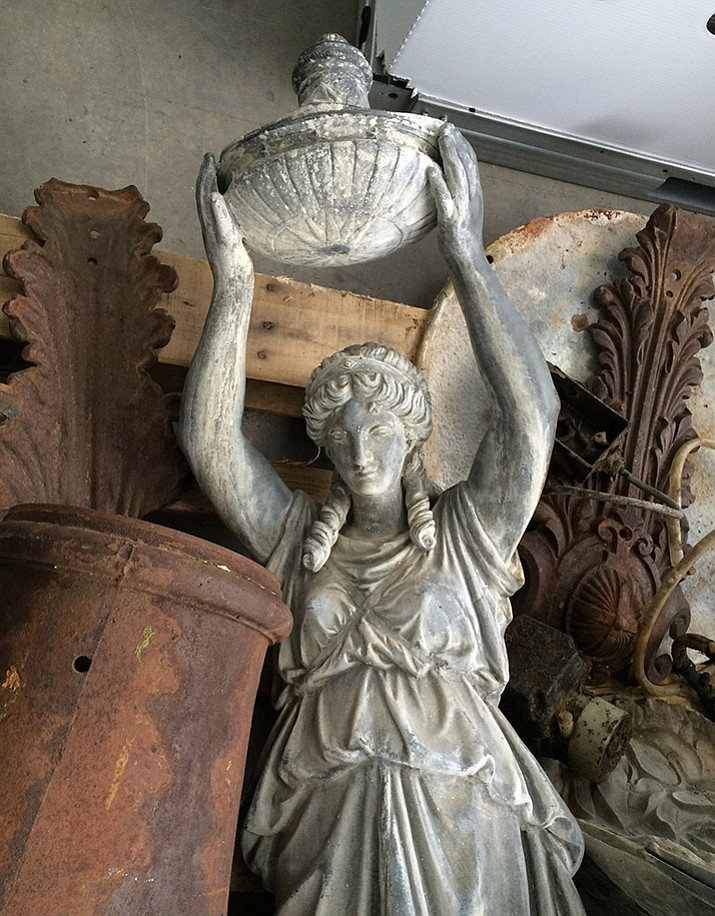 Lady Ermintrude lies among the rusty damaged artifacts of her fountain centerpiece. She may yet be resurrected in bronze and returned to her home on the courthouse plaza.

Too costly to repair.

“Lady Ermintrude” used to stand in the fountain on the northeast side of the courthouse. In more recent decades, she and the parts to her fountain have rested in storage at Sharlot Hall Museum. 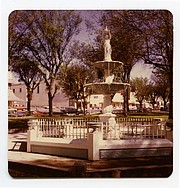 Lady Ermintrude tops the fountain on the courthouse plaza in this pre-1976 photo.

The name is derived from the Germanic elements ermen, meaning “whole, universal” and thrud “strength.”

“We got jazzed when we first saw it,” Van Keuren said.

Plans to get the statue and original fountain pieced back together in time for the Courthouse Centennial later this month were quickly dashed when they saw its condition – busted bases, missing swan heads, chipped and split decorative corner pieces, and a badly damaged six-foot catch basin – a repair and maintenance nightmare.

County officials were hoping to have the original centerpiece restored for the Oct. 15 Centennial event. But in talking with Ed Reilly, owner of Bronzesmith Foundry in Prescott Valley, about what it would take to build a replica of the fountain out of bronze, it soon became evident that wouldn’t happen.

The preliminary discussion indicates a project of such magnitude would take at least six months to complete.

Van Keuren said county workers started putting the old pieces together and looking at the welding it would need to seal up the cracks and joints, and repair the structural damage of many pieces.

“It would take a tremendous amount of work,” he said, adding that it also would take about $10,000 to repair the original fountain to a fully operational condition that wouldn’t last more than two to three years.

“We were disappointed not to be able to put the original back at the courthouse. But we want something worth the money,” he said.

With no estimate yet in hand, it’s hard to say how much money it will take to get Lady Ermintrude back on her pedestal. Using the change people throw into the fountain isn’t necessarily an option. The county traditionally collects the coins twice a year for Yavapai Exceptional Industries (YEI), an agency that provides job training, employment, volunteer placements, and support services for developmentally disabled adults. YEI occasionally supplies the county with its picnic tables.

The Prescott Kiwanis Club donated the current fountain centerpiece in 1986. Between 1976 when the original statue and base were slated for salvage – and saved – and 1986, Van Keuren said he didn’t know what, if anything, was installed in the fountain space.

An undated photo shows a tall Christmas tree standing inside the fencing surrounded by white fabric.

Van Keuren said he hopes to repurpose Lady Ermintrude somewhere else – perhaps at a court building in another location in the county.