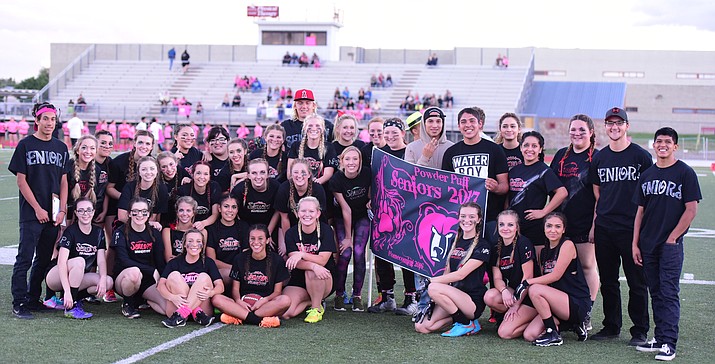 Highlights from the annual powderpuff game as part of Homecoming/Spirit Week at Bradshaw Mountain High School which was held Wednesday, September 28, 2016. The seniors (in black) shutout the juniors 18-0. (Les Stukenberg/The Daily Courier Photo)

By Special to the Courier
Originally Published: October 3, 2016 6 a.m.
Tweet

The week leading up to Homecoming is always filled with school spirit and traditions. This past week on the campus of Bradshaw Mountain High School was no different.

The week was filled with events including the annual dodge ball tournament, the Bradshaw bean bag throw, the Powder Puff game and the bonfire. It also was Spirit Week on campus leading up to the varsity football game Friday followed by the Homecoming dance on Saturday.

The students held a dodge ball tournament Monday in which the winners would have the privilege of challenging the faculty team during Friday’s pep assembly. This is a serious competition each year for bragging rights. The winner of the student tournament was Team JSA. They took on the faculty on Friday during the assembly and seemed to have no problem eliminating two faculty teams with no mercy.

On Wednesday evening the 25th annual Powder Puff game was held with the juniors challenging the seniors. It was a tough match, but the seniors defeated the juniors 18-0. The game was followed by the annual bonfire to continue the spirit of Homecoming.

The school spirit was felt all week on campus and the black out for Friday’s Homecoming game did not disappoint. The varsity team played a tough game improving their record to 4-2, with a 27-14 Homecoming victory over Mingus.