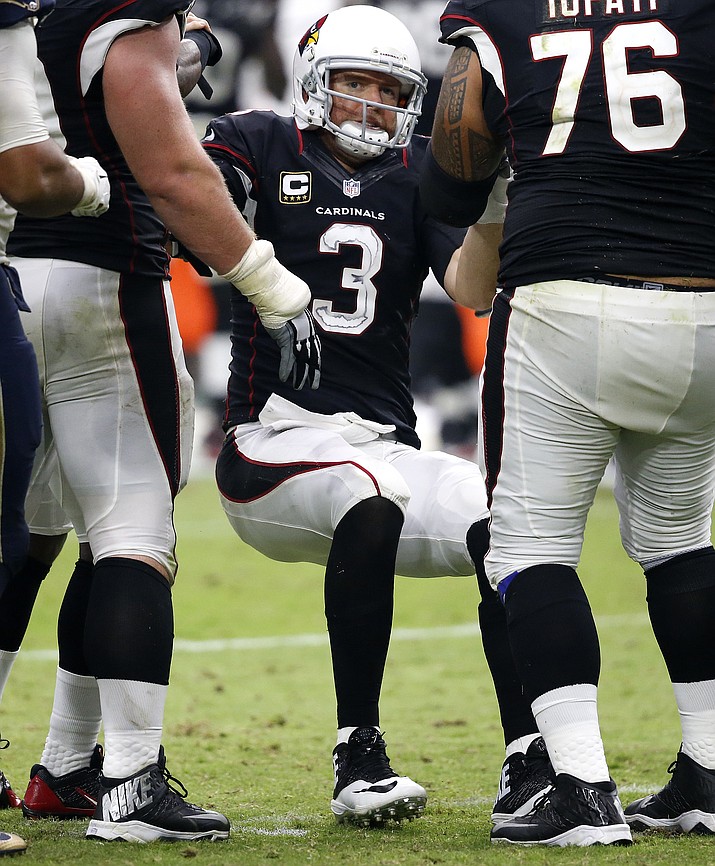 Arizona Cardinals quarterback Carson Palmer is helped up after a being sacked against the Los Angeles Rams during the second half Sunday, Oct. 2, in Glendale. Palmer left the game after the hit.

TEMPE — Carson Palmer was going through the NFL's concussion protocol on Monday and Arizona coach Bruce Arians said he wasn't ruling out the quarterback for Thursday night's game at San Francisco.

The loss of Palmer would be another blow to an Arizona team that has stumbled to a 1-3 start after opening the season with the highest of expectations.

Palmer's head slammed to the turf on a sack by Aaron Donald late in the Cardinals' 17-13 home loss to the Los Angeles Rams on Sunday. 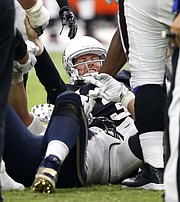 Cardinals quarterback Carson Palmer is helped up after a being sacked against the Los Angeles Rams Sunday, Oct. 2.

"He got better last night and improved," Arians said. "I talked to him last night, and his wife. Like I said, it's all up to the doctors."

Asked if he was encouraged, Arians said, "Yeah. From what I thought yesterday, I thought there was no chance."

Palmer was doing some physical activity as part of the protocol on Monday and would not have to practice in order to play against the 49ers, Arians said.

"He doesn't practice on Wednesdays anyway," the coach said. "It's not like they're doing something he hasn't seen before. He'd be more than ready to go."

Arians said a decision on whether Palmer will play probably won't be made until "probably about the time we get on the plane" Wednesday.

If Palmer can't go, the job falls to Drew Stanton, who re-signed this offseason to return as the Cardinals' backup.

Before Sunday, Stanton hadn't had significant playing time since Palmer went down with a torn ACL in the 2014 season. Stanton went 5-3 as a starter then. In nine games played, he threw for 1,710 yards and seven touchdowns with five interceptions before he too was lost for the rest of the season with a knee injury.

The Cardinals still had a chance when Stanton took over for Palmer on Sunday, but he threw an interception with 1:34 to play.

Stanton got Arizona to the Rams 37 in the final seconds, but his desperation pass was intercepted as the game ended.

Stanton has been with Arians since the coach's days at Indianapolis and the two came to Arizona together.

"I think that is why I'm here, to fulfill these kinds of opportunities if it presents itself," Stanton said. "That all remains to be seen, and again, last game is behind now and unfortunately I didn't do what I was hoping to do and really what I thought I was going to do. Now it's time to move on and prepare for San Francisco and try to win a division game."

Arians said the game plan would not change with Stanton.

"Not one bit," Arians said. "They're so similar and we don't have to change anything when he's in there."

The Cardinals are trying to figure out just what's gone so wrong this season. Some of the problems are turnovers. Some is communication, especially in the revamped secondary.

"We're just not playing our best football," Tyrann Mathieu said. "Defensively, we're not creating enough turnovers. Critical situations in the game we can't get off the field on third downs. I think that's what it really comes down to. Plays we made in the past, we're just not making those plays right now."

Mathieu is embracing the situation, though.

"Backs against the wall, we're 1-3," he said. "Everybody that believed in us, they don't believe in us no more so it's just us now. We prefer that."

Mathieu, playing only free safety and kept out of his usual do-everything role while he recovers from knee surgery, said Monday that it's time to get back to his old job, where he often plays "in the box" and is a disruptive force all over the field.

"We're 1-3 man," he said. "It's not really time for me to sit back and play it slow. I feel great. I look forward to wherever coach puts me at. But if I have anything to say about it, I'll be back in my normal spot. ... I'm ready to cut it loose."

Arians has said he was waiting for Mathieu to come to him to tell him he was ready to resume that "Honey Badger" role. Has Mathieu done that?

"That's what I just did," he said with a big smile.