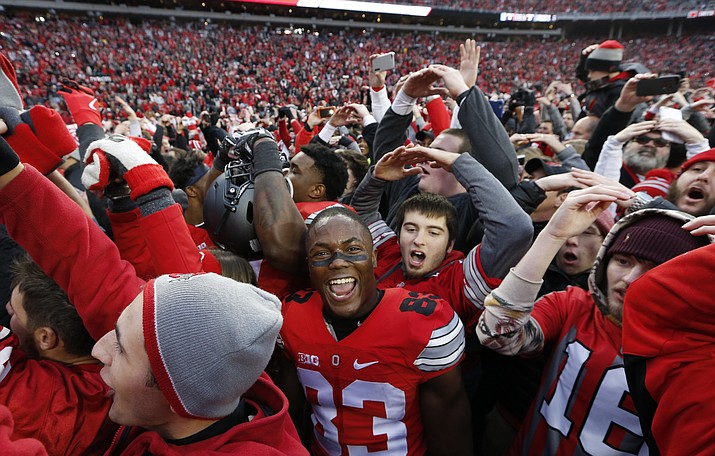 COLUMBUS, Ohio (AP) — Curtis Samuel swept in for a 15-yard touchdown after Ohio State barely converted a fourth-and-1 and the second-ranked Buckeyes beat No. 3 Michigan 30-27 in double overtime Saturday.

With Ohio State (11-1, 8-1 Big Ten, No. 2 CFP) facing fourth-and-1 from the 16, coach Urban Meyer decided not to kick a potential tying field goal with a kicker who had already missed two short ones in regulation.

J.T. Barrett kept it on fourth down and slammed into the back of his blocker, A.J. Alexander, right at the line to gain. The first-down call stood up to video review. On the next play, Samuel, who had made a swerving, change-of-direction run to set up the fourth-and-1, raced into the end zone to win it.

The first matchup to go to overtime in the 113-game history of the rivalry likely eliminated Michigan (10-2, 7-2, No. 3 CFP) from the playoff race and could have locked up a spot for the Buckeyes. The Buckeyes missed out on a spot in the Big Ten title game, with Penn State heading to Indianapolis instead to face Wisconsin.

Michigan could end up in the Rose Bowl, but the biggest prizes are still eluding the Wolverines in their second year under coach Jim Harbaugh. He’s 0-2 against Meyer and the Buckeyes.

Ohio State wiped out a 10-point third-quarter deficit and dominated the fourth quarter, but Tyler Durbin missed a 20-yard field goal that would have tied it with 7:01 remaining. Barrett and the Buckeyes gave him another chance, this time from 23 yards with a second left in regulation and Durbin nailed it.

Barrett scored on a quarterback draw and Ohio State’s first possession of OT to give the Buckeyes the lead, but Michigan tied it on a 5-yard touchdown pass on fourth down from Wilton Speight to Amara Darboh.

TUSCALOOSA, Ala. (AP) — Jalen Hurts rebounded from two early interceptions to pass for 286 yards and Alabama’s defense did the rest asgainst Auburn.

The Crimson Tide (12-0, 8-0 Southeastern Conference, No. 1 CFP) led 13-9 at halftime, dominating the stat sheet but only taking over the scoreboard in the second half. The defense pushed its string of quarters without allowing a touchdown to 14-plus.

Auburn (8-4, 5-3, No. 15) failed to muster much offense for the second straight SEC game, this time playing without injured quarterback Sean White.

Hurts displayed the same poise in overcoming two first-half interceptions that have helped him lead the Tide into the SEC championship game. He completed 27 of 36 mostly short and mid-range passes and threw for two touchdowns. Alabama has won three straight Iron Bowls for the first time since 1990-92.

Hurts also ran for 37 yards and a touchdown, leading two straight touchdown drives in the third quarter to all but put the game away after a mistake-filled first half.

The Badgers triumphantly lifted Paul Bunyan’s Axe again, the trophy that goes to the victor in the most-played rivalry in major college football.

Wisconsin (10-3, 7-2 Big Ten, No. 6 CFP) turned in a stalwart defensive effort in the second half after getting outplayed in the first and falling behind by 10 points at halftime.

The comeback served as an exclamation point for an already momentous weekend. Wisconsin had wrapped up the Big Ten West and a spit in the league title game after Nebraska lost to Iowa on Friday night.

Mitch Leidner threw four interceptions in the second half for Minnesota (8-4, 5-4).

He threw a 34-yard touchdown pass to Chris Godwin down the sideline on Penn State’s first second-half possession and followed it with a 45-yarder to Mike Gesicki on the next drive. Godwin got loose down the middle minutes later and McSorley hit him in stride for 59 yards to give Penn State a 31-12 lead.

Andre Robinson added a 14-yard touchdown run and caught a 40-yard pass from McSorley to complete the scoring in the fourth quarter, and Barkley scored on a 1-yard run in the second. Barkley left in the third quarter with an apparent right leg injury and did not return.

Louisville (9-3, CFP No. 11) appeared headed for a late go-ahead score when Jackson’s fumble at Kentucky’s 10 was recovered by the Wildcats’ Courtney Love with 1:45 left. Stephen Johnson led Kentucky (7-5) into position for MacGinnis’ winning kick.

Jackson’s desperation heave from deep in Louisville territory was intercepted by Mike Edwards, his second of the game. The Wildcats ended a five-game losing streak in the series.

Jackson likely could have wrapped up the Heisman with his record-setting day, but a second consecutive loss might impact the race. The sophomore struck a Heisman pose after a tying touchdown in the fourth quarter. He had his school-record eighth 100-yard rushing game and broke the Louisville mark for rushing yards. He scored four times to break the Atlantic Coast Conference single-season record with 51.

LOS ANGELES (AP) — Adoree Jackson returned a punt and a kickoff for touchdowns and also caught a scoring pass to help lift Southern California to its eighth consecutive victory, a romp ovre Notre Dame on in the 88th edition of their famed intersectional rivalry.

Jackson, the Trojans’ do-everything cornerback, put on a dazzling athletic display in perhaps his final home game while USC (9-3, No. 12 CFP) persevered through rain at the Coliseum to claim the Jeweled Shillelagh for the 11th time in 15 years.

Freshman Martell Pettaway burned his redshirt and ran for 181 yards in his debut for the Mountaineers (9-2, 6-2 Big 12). They outscored Iowa State 28-3 in the second half.

Howard’s 71-yard TD toss to Shelton Gibson and Pettaway’s 4-yard touchdown run, the first of his career, made it 35-19 late in the third quarter. Gibson followed with a 40-yard TD catch to make it a 23-point cushion.

Justin Crawford, who ran for 331 yards against Oklahoma last week, was replaced by Pettaway after two series.