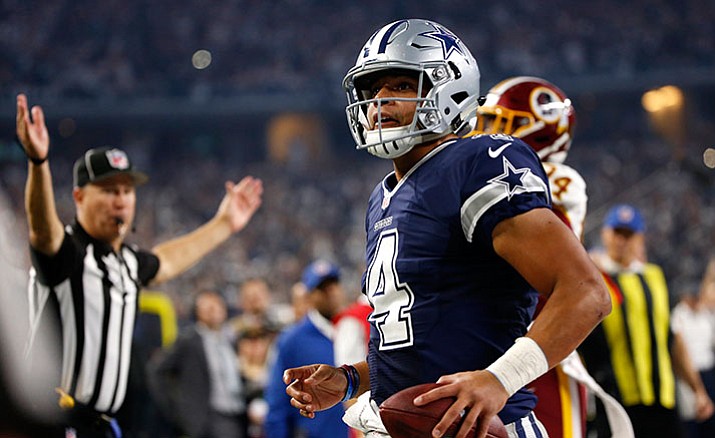 An official signals touchdown as Dallas Cowboys quarterback Dak Prescott (4) runs the ball into the end zone during the second half of the team's NFL football game against the Washington Redskins on Thursday, Nov. 24, in Arlington, Texas.

The rookie quarterback tied Don Meredith's club record from 50 years ago with his fifth rushing TD and the NFL-leading Cowboys (10-1) won despite 449 yards passing and three touchdowns from Kirk Cousins, the first Redskins quarterback with two 400-yard games in a season.

The Redskins (6-4-1) were swept by their NFC East rival, and the defending division champions fell 3 1/2 games behind Dallas after their seventh Thanksgiving loss to the Cowboys in eight tries.

Elliott, the NFL rushing leader, had the fourth score on five straight second-half touchdown drives between the two teams with a 1-yard run for a 31-19 lead midway through the fourth quarter. The 21-year-old had 97 yards to give him 1,199 for the season.

The Cowboys had an eight-game streak with at least 400 yards snapped, finishing with 353. But Dallas answered with touchdowns each time the Redskins got within a score. After Cousins' second scoring toss to Jordan Reed, an 8-yarder with 1:53 remaining, Dustin Hopkins' onside kick went out of bounds, and the Cowboys ran out the clock.

The Lions (7-4) have won six of seven, including two against Minnesota this month, despite trailing in the fourth quarter of every game this season. They extended their NFL record of having their first 11 games decided by seven or fewer points.

The Vikings (6-5) have lost five of six, plummeting out of first place after surging to the top of the division by winning their first five games.

Minnesota could have played for overtime on its last drive, but coach Mike Zimmer allowed Sam Bradford to throw and Slay made him regret it.

The Steelers (6-5) helped their playoff chances with a second straight victory.

Andrew Luck sat out with a concussion, leaving Scott Tolzien under center for the Colts (5-6).

The Steelers built a 21-7 lead by scoring touchdowns on each of their first three possessions — a 5-yard TD run from Le'Veon Bell, and touchdown catches by Brown of 25 and 33 yards.