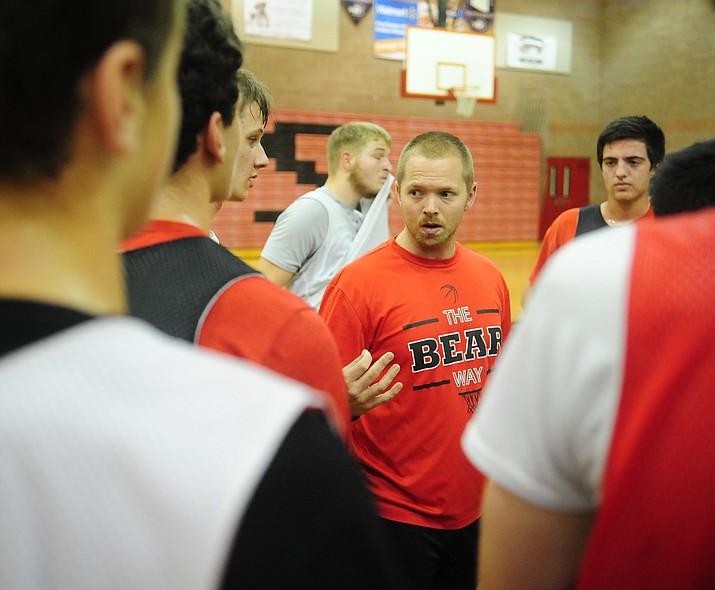 The Bears, who lost in the opening round of the Division III state playoffs last season and finished with a 17-10 overall record, open the new campaign at the Sunnyslope Hoopsgiving Tournament this Monday through Wednesday in Phoenix.

Newcomers to watch on the Bears’ 15-player roster are Monument Valley senior transfer guard Levi Charley (5-10) and speedy senior guard Nick Othon (6-1). Bradshaw has only one returning starter in Huntley.

“We are not as experienced as last year,” second-year Bradshaw coach Matt Simpson, 31, said from practice last week. “Our approach has been on skill development and repetition for memory – putting our guys in position to be successful. I’m really excited about this group.”

Young admits that losing Ibarra, now a freshman at Embry-Riddle, and Taylor was “a big loss,” but said it should force the Bears to play more as a team and balance out the scoring.

Simpson said his team “spent months” in the off-season concentrating on shooting, preparation and technique to “change bad habits,” among other things.

“We will run a little bit more and be more defensive focused,” he added.

Huntley, who also stars on the varsity baseball team, said the Bears “want a fast-paced, turnover-causing, defensive-minded machine.” With Ibarra and Taylor gone, Huntley realizes that he must look to score more, although he wants “it to be a team effort.”

“We have better chemistry this year,” he added. “We need to lean on the underclassmen and give them the confidence to succeed.”

Bradshaw also possesses a taller lineup this season and will focus on rebounding, playing physical and pushing the ball in transition.

“We will all be working together and learning what it takes to win,” Young said. “We built a bond last year and we’re building team chemistry.”

The athletic King-Johnson, who grew an inch in the off-season and was a standout defender on Bradshaw’s football team this fall, said the Bears’ offense will improve because of the work they did in the off-season with a shooting coach. The Bears expect to shoot the 3-pointer well, too.

“We are all able to score,” he added.

King-Johnson broke his right shooting hand in the off-season, but he said it has healed. He likes Bradshaw’s length and its ball-pressure defense.

“We’re all hard-working,” he added. “We should do pretty good this year.”

The Bears will play in the realigned 4A Grand Canyon Region with rival Prescott, Mingus Union, Flagstaff, Coconino, Mohave and Lee Williams. Young said Bradshaw’s main goal is to win the region title and qualify for the playoffs.

At the end of the regular season, all of the region’s teams will play in a region tournament. The winner goes to the 16-team state tournament. The state field will be comprised of 4A’s eight region champs and eight at-large squads based on power-point ranking.

“Our guys want to win a league championship,” Simpson said. “This was a senior-dominated league last year. This season it’s all about who prepares and who is in the best shape.”

Vidovic said Bradshaw has a deeper bench this season and will challenge for the region.

“Our defense is fast and our transition game will improve,” he added.

Paulino said the Bears have implemented “a whole new offense” that will “run a lot more and be a lot faster.”

“Our height, overall intensity, energy and being able to outrun [opponents will be key],” Paulino added. “We have to be patient and not panic under pressure.”

Simpson said he has centered off-season workouts around running, running and more running. The idea is to still have some energy in the tank when games are close in the fourth quarter.

“Our goal is to be in the best shape in the section [region] and dribble at full speed,” Simpson said. “We are not rebuilding, we’re reloading. I’m excited about who we have. Multiple guys can score and put the ball in the basket.”