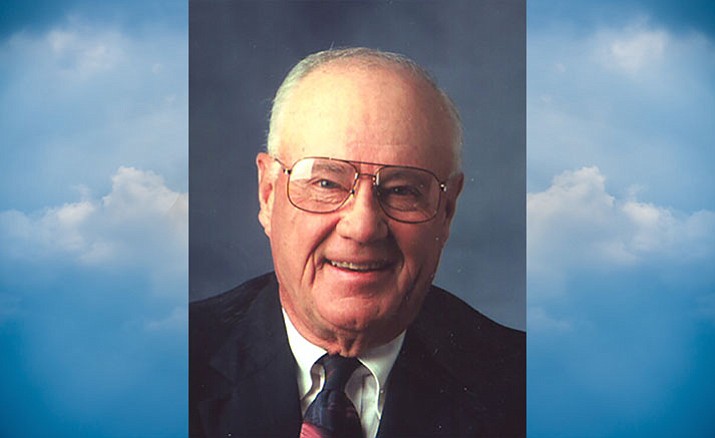 Douglas J. Wall, 89, passed away peacefully on November 8, 2016, at his home in Prescott Valley, Arizona. Doug was born April 1, 1927. He grew up in Iola, Kansas, attended Kemper Military School and served as Corpsman in the United States Navy. He attended the University of Kansas and coached the University of Kansas swim team while earning his Juris Doctorate. He was proud to wear the KU Jayhawk Crimson and Blue.

Doug began his professional legal career in Phoenix, Arizona where he worked for Valley National Bank. In 1959, Doug moved to Flagstaff where he became a partner in the law firm of Mangum, Wall, Stoops & Warden where he remained “Of Counsel”. During his prestigious career, he was dedicated to serving on multiple Boards including APS, Pinnacle West, Arizona Board of Regents, UMC Tucson, Arizona Water Commission and multiple others. Doug also received numerous honors and distinctions including Flagstaff “Citizen of the Year”.

A “Celebration of Life” hosted by Northern Arizona University and Mangum, Wall, Stoops & Warden is scheduled at 1 p.m., December 10, at the 1899 Bar and Grill Ballroom located on the NAU campus, 307 W. Dupont, Flagstaff, Arizona. In lieu of flowers, the family has requested donations be made in Doug’s honor to the Swimming and Diving Teams, c/o NAU Foundation, Fund #4270, 624 S. Knolls Drive, P. O. Box 4094, Flagstaff, AZ 86011.

Doug Wall was an influential leader and a dynamic achiever who has impacted thousands of peoples lives. He made the world a better place and he will be greatly missed.