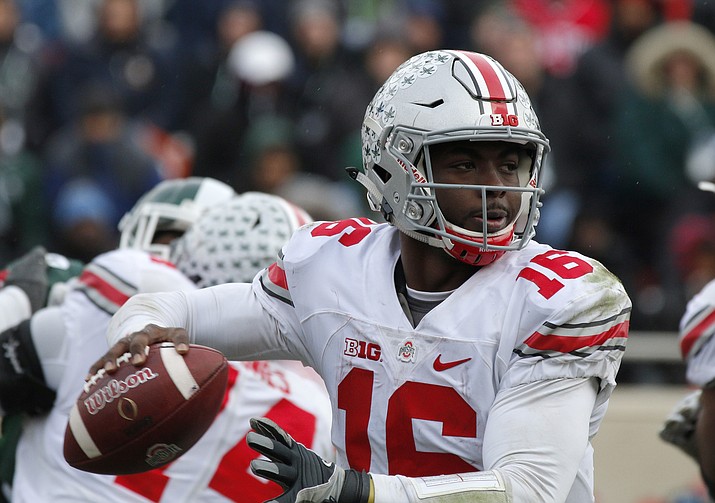 EAST LANSING, Mich. (AP) — Mike Weber ran for 111 yards and a touchdown, and No. 2 Ohio State held off Michigan State 17-16 on Saturday after the Spartans missed a 2-point conversion with 4:41 remaining.

Ohio State (10-1, 7-1 Big Ten, No. 2 CFP) can now move on to next weekend’s showdown with rival Michigan, but only after withstanding a spirited challenge from a Michigan State team that derailed the Buckeyes’ national title bids in two of the previous three seasons. The Spartans (3-8, 1-7) were down 17-10 when LJ Scott scored on a 1-yard run with 4:41 to play. Michigan State went for the lead, but Tyler O’Connor’s pass on the 2-point conversion attempt was intercepted in the end zone.

Michigan State coach Mark Dantonio said he’d planned all week for the Spartans to go for 2 if a situation like that came up.

The Spartans got the ball back one more time, at their own 20 with 2:04 remaining. Tyquan Lewis sacked O’Connor on the first play, and then Gareon Conley intercepted him on the second.

Scott ran for 160 yards and also scored on a 64-yard catch-and-run in the first minute of the game, but the Ohio State defense didn’t allow much more after that. J.T. Barrett threw a 24-yard touchdown pass to Curtis Samuel in the first quarter, and the game was tied at 10 at halftime.

Weber’s 4-yard TD run in the third gave the Buckeyes the lead for good.

ANN ARBOR, Mich. (AP) — De’Veon Smith ran for two touchdowns in a 3:33 span late in the third quarter, finishing with a career-high 158 yards rushing, to help Michigan shake off Indiana.

John O’Korn made his first start for Michigan (10-1, 7-1, No. 3 CFP), replacing the injured Wilton Speight, and struggled to lead an offense that was averaging 45 points and 232 yards passing.

WEST LAFAYETTE, Ind. (AP) — T.J. Watt returned an interception 17 yards for a touchdown, and Wisconsin scored 35 points in the final 8 1/2 minutes of the first half.

Alec Ingold and Bradrick Shaw each scored twice during the flurry, helping the Badgers (9-2, 6-2 Big Ten, No. 7 CFP) to their fifth straight win overall and 11th in a row in the series. They can wrap up the West Division title and earn a spot in the conference championship game with a victory next weekend at home against Minnesota. Corey Clement rushed for 112 yards and a touchdown for Wisconsin.

Herbert led the Ducks (4-7, 2-6) on a 10-play, 75-yard drive in just over two minutes, capping it with the TD pass to Carrington. Carrington was initially called out of bounds but that call was reversed after a replay showed he got a foot down inbounds.

Herbert passed for 324 yards and three TDs. He also scored on a 1-yard run in the fourth quarter.

Joe Williams rushed for 149 yards and a touchdown for Utah.

Liufau briefly left in the fourth quarter only to return and pick up a crucial third-and-short that led to a game-sealing TD run by Lindsay.

BATON ROUGE, La. (AP) — Florida stuffed LSU’s Derrius Guice on a do-or-die run from the 1 in the final seconds and the Gators held on to wrap up the Southeastern Conference’s East Division.

The stop capped a defensive struggle in which LSU converted a fourth-and-10 play on its final drive, only to get stopped on back-to-back runs from the 1 to end the game.

Florida’s Austin Apppleby completed only seven passes on 17 attempts, but one of his connections went for a pivotal 98-yard touchdown to Tyrie Cleveland. Eddy Piniero scored the rest of Florida’s points on field goals of 36, 24 and 34 yards.

LSU (6-4, 4-3 SEC, No. 16 CFP) controlled most of the game and held considerable statistical advantages, outgaining Florida (8-2, 6-2, No. 23 CFP) 423 yards to 270 and holding possession for 34:02. But on three occasions, the Tigers failed to score after driving inside Florida’s 10 — the first time because of Guice’s fumble in the first half and the second time because of a botched field goal in the third quarter. The loss likely cost the Tigers a Sugar Bowl bid.

Cook entered the game needing 19 yards to break Warrick Dunn’s 20-year old school record for rushing (3,959) and did so with a 41-yarder in the first quarter. He finished the first half with 104 yards to become just the sixth player in Atlantic Coast Conference history to reach 4,000 yards and the first to do it in three years.

Syracuse starting quarterback Eric Dungey again warmed up before the opening kickoff but did not play for the second straight game. The sophomore has been out since suffering a vicious hit to the shoulder-head area in the first quarter against Clemson two weeks ago.

LINCOLN, Neb. (AP) — Terrell Newby ran for a career-high three touchdowns for Nebraska, and Ryker Fyfe passed for 220 yards and a score filling in for injured starter Tommy Armstrong Jr.

The Cornhuskers (9-2, 6-2 Big Ten) stayed alive in the West Division. They must win at Iowa on Friday and Wisconsin must lose to Minnesota for Nebraska to go to the conference championship game.

Maryland (5-6, 2-6) lost for the sixth time in seven games and has been outscored 149-13 over three weeks. Fyfe prevailed over Max Bortenschlager in a battle of backup quarterbacks.

COLLEGE STATION, Texas (AP) — Jake Hubenak threw for 248 yards and a touchdown and Myles Garrett had 4 1/2 sacks to help No. 23 Texas A&M get back on track.

The Aggies (8-3) were in desperate need of a victory after consecutive losses to Mississippi State and Mississippi ruined their shot at the College Football Playoff.

The Roadrunners (5-6) cut the lead to three early in the second quarter after a one-handed touchdown grab by Josh Stewart. The Aggies then scored the next 13 points, capped by a 47 yard run by Trayveon Williams to make it 23-7 in the third quarter.