Hunt is on for next PV Town Councilmember
Council debates moving quickly, or taking its time 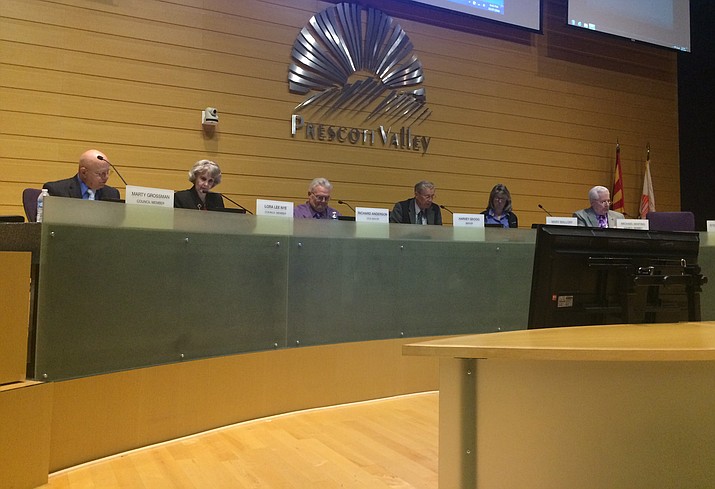 The Prescott Valley Town Council sits in deliberation at its Thursday, Oct. 27, 2016 meeting.

The Prescott Valley Town Council finds itself in a position it hasn’t seen since 2012, according to Town Clerk Dianne Russell at the Town Council Work Study Session on Thursday, Nov. 10. As of Thursday, Nov. 3, there is a vacancy on the council due to the resignation of Stephen Marshall, she said.

“We will move forward according to statute and according to town code to begin the process to fulfill that vacancy,” Russell said.

While Russell presented council with two different calendars, the first with an expedited process and one week of advertising and the second that included a slowed down process and more advertising space, Councilmember Marry Mallory said she didn’t want to rush through the process, noting that she wants to be as thorough as possible in dealing with the vacancy.

Vice Mayor Richard Anderson recommended extending the process out to where the council didn’t begin looking at the applicants until after the new year begins.

“I see no reason why we shouldn’t extend the application process out until the end of December and not begin to review applications until sometime after the first of the year,” he said, echoing Mallory’s notion of not wanting to rush through the process. “We should allow plenty of time, I think, for the word to get out and I think six weeks would be plenty of time to get the word out and allow people to put in their applications and then we can begin that review process after we come back after the holidays.”

Anderson said he was for extending the cutoff for applications until the last Friday in December as it would allow everyone interested enough time to put in an application.

Councilmember Lora Lee Nye said she also wanted to extend the application process after putting a lot of thought into the matter.

“The holidays are a complicated time for people and I don’t want it to get lost in the holidays,” she said. “It’s too important.”

Council directed Russell to start advertising for the position right away.