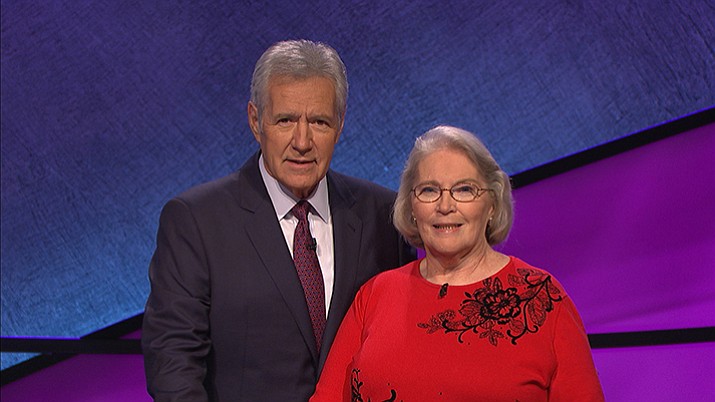 It’s not easy to become a contestant on “Jeopardy!”

Contestant wannabes not only need an insane amount of general knowledge, they must beat astronomical odds to make it on the show.

Prescott homemaker Georjean McKeeman knows this for a fact, having made the list of potential contestants three times.

“I have been trying to get on ‘Jeopardy!’ for over 10 years,” said the new grandmother to Sean, 7 months old, son of her daughter, Jennifer who lives in Lincoln, Nebraska. She and her husband, Bruce, also have a son, Neil, in Austin, Texas. “This time the stars aligned.”

Georjean did better than just earn a spot on the show. She delivered a stellar performance on her first night, which aired on Monday, Nov. 7, beating out two other contestants who did not properly guess the landlocked state that is home to the California gull. Correct answer is Utah. She went into the final round with $8,000 and with her final wager won $15,999. On her second night – the episode aired Saturday night, Nov. 12, because Tuesday, Nov. 8, was the election – Georjean came in third; none of those contestants won the final jeopardy round but her contestants were better able to manage their final wager to come out ahead. All told, Georjean won $1,000 for that round so her total, before taxes, ended up at $16,999.

“It was great,” McKeeman said from her Prescott home on Monday, Nov. 14.

Georjean’s road to the contestant box started with an online test that required she answer 50 questions in 20 minutes. Six months later, Georjean received an email asking her to come to Los Angeles for an in-person tryout. She did that in December.

The audition consisted of another 50-question quiz to be completed in 20 minutes, along with an interview and practice using the show’s buzzers. In July, she got yet another call asking her to come and tape a show at the end of August.

Georjean was one of about 70,000 who took the online test. Of those, 3,000 were invited for in-person interviews and 300 were chosen as contestants.

“I was just very excited to get called to appear this time,” Georjean said. “I’ve been a fan for years and years.”

For certain, Georjean said she experienced her fair share of pre-show jitters. Once on stage with her two fellow contestants and the Canadian-born game show host Alex Trebek, Georjean said her mind was all on answering questions as quickly and correctly as she could.

“Jeopardy!” is in its 33rd season in syndication.

With 23 million viewers each week, it’s the top-rated quiz show on television and bills itself as “America’s Favorite Quiz Show.” It has won several awards in its 30-plus years on the air, including setting a Guinness World Records record for the most Emmy Awards won by a TV game show – 33.

“It was intense,” Georjean said of her role as contestant, noting the actual show is less stressful than the contestant quizzes.

“At least on the show, you have five things in a category that are somehow related,” she said.

However, there’s still an element of surprise: “You never know what categories you’re going to get.”

Georjean said she thinks she is strongest in Bible knowledge, but that was not a category she had as a choice. So she leaned on her abilities to recall and retain large chunks of trivia she has acquired over the years. So intent was she on playing the game, which includes mastery of a buzzer and making suitable wagers, Georjean said she cannot recollect the hardest question she was able to answer.

She joked that in her family games of “Trivial Pursuit,” she is forced to be a one-person team.

As for host Alex Trebek?

“He’s a very nice man, very friendly – just the way he appears on the show,” she said.

On every show, Trebek shares with the audience something about each contestant, everything from unusual hobbies to embarrassing moments that shaped their futures.

In Georjean’s case, she talked of her travel bug. She revealed that it is her desire to visit all national park service areas: all 413. So far, she has visited 315. With her Jeopardy! winnings, Georjean and her husband will travel to some of the more remote places, such as northern Alaska.

Will she try out for any more quiz shows? She said she thinks not.

“We have watched other game shows, but this is the one I watch on a regular basis,” Georjean said. “I am ineligible to be on Jeopardy! again as long as Alex Trebek is the host. That’s their rules.”

So she’ll just have to watch from the comfort of her own living room – it’s a sure bet she’ll continue to know a lot of the right answers. But this way she does not need to frame a question or hit the buzzer.