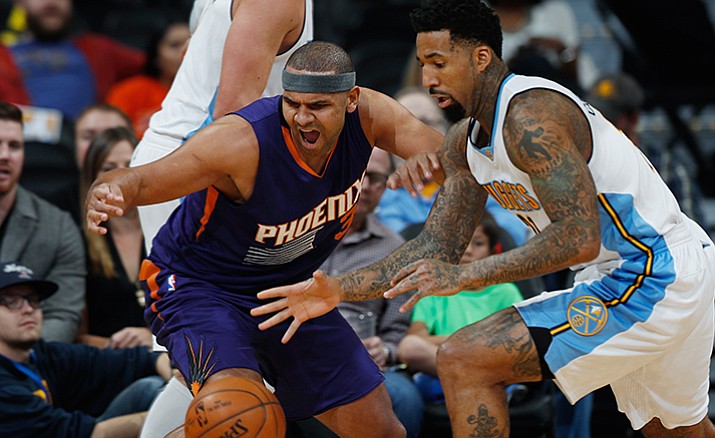 Phoenix Suns forward Jared Dudley, left, battles for control of a loose ball with Denver Nuggets forward Wilson Chandler in the first half of an NBA basketball game, Wednesday, Nov. 16, in Denver.

DENVER — Wilson Chandler scored a season-high 28 points and the Denver Nuggets won for the first time at home this season, 120-104 over the Phoenix Suns on Wednesday night.

The Nuggets played their second straight game without starting shooting guard Gary Harris. He's expected to be out until mid-December with a foot injury.

Brandon Knight scored a season-high 32 points for Phoenix, and Devin Booker had 24 before he was ejected with 17.8 left after receiving his second technical foul. The Suns have lost five of six.

Tyson Chandler returned to the Suns' starting lineup after missing the last four games because of his mother's death. He had five points and five rebounds in 21 minutes.

The Suns never led, but cut a 20-point deficit to seven in the fourth quarter before Denver pulled away.

The Nuggets built an early double-digit lead with a pair of 8-0 runs. They led 12-4 thanks in part to a Mudiay's jumper and layup, then pushed it to 25-10 on the back of five straight points from Chandler and a 3-pointer from Nelson. Gallinari hit a 20-foot jumper to push it to 63-43 early in the third.

Suns: Booker cut it to 89-76 at the end of the third when grabbed an offensive rebound and hit an off-balance 17-foot jumper at the buzzer. .. Phoenix was outrebounded 49-35.

Nuggets: G Will Barton (ankle) missed his eighth straight game. ... The Nuggets waived little-used F/C Jarnell Stokes and signed F Alonzo Gee, who was waived by the New Orleans Pelicans earlier this season. The seven-year veteran had one assist in four minutes. "In the past I've always admired him from afar," Nuggets coach Mike Malone said before the game. "I like his approach."

Suns: Continue a six-game trip against the Indiana Pacers on Friday night.

Nuggets: Continue a four-game homestand against the Toronto Raptors on Friday night.