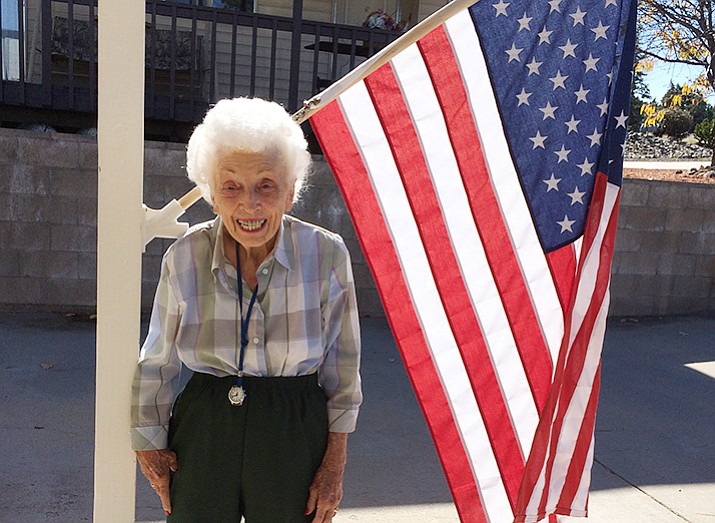 Jerry Emmett, 102, in front of the American flag she puts in its holder every morning at her Prescott home. Emmett’s first presidential vote was in 1933 for Franklin Delano Roosevelt.

PRESCOTT – Sitting on her porch swing just beyond the American flag she flies every day, 102-year-old Jerry Emmett, a devout Democrat and honorary delegate to Hillary Clinton’s convention in July, said she is “broken hearted” by her candidate’s defeat in Tuesday’s historic election.

“I wanted to vote for the first woman president,” Emmett said.

Frankly, she said, she is shocked that Republican Donald Trump was able to win the highest office in the land.

“I can’t believe that we did this,” said Emmett whose first presidential vote was for the 32nd president of the United States, Democrat Franklin Delano Roosevelt. Roosevelt was the only president elected to four terms; he died in April 1945.

Ever the patriotic optimist, though, Emmett said despite her immense disappointment, and sadness for a woman she said has many of the same qualities as her hero Eleanor Roosevelt who devoted her life to serving others, she still has great faith in America.

“You know, in my lifetime, I’ve gone through two Great Depressions, and two World Wars, and America has stood tall and brave in all of them. And we’ll do it again,” Emmett said.

Emmett said she went to bed before the final results were tallied, but knew the election that Clinton fought so hard to win just was not going to be. She still hopes that one day the “ceiling” for women will be broken and there will be a female president of the United States. Whether it will happen in her lifetime, she simply does not yet know.

A 40-year educator whose mother, Winnie Johnson of Gilbert, was part of the suffragette movement, remembers vividly the day her mother and her friends were able to go the voting pools after the August 18, 1920 passage of the 19th Amendment to the United States Constitution. She said her then 400-population town turned out in force to cheer as women were given the right to vote and walked into the polls for the very first time.

“I’ve cried a little, but America always comes out doing the best in every situation,” Emmett said. “We’ll get through this like we do everything else.

“I just don’t understand what happened.”