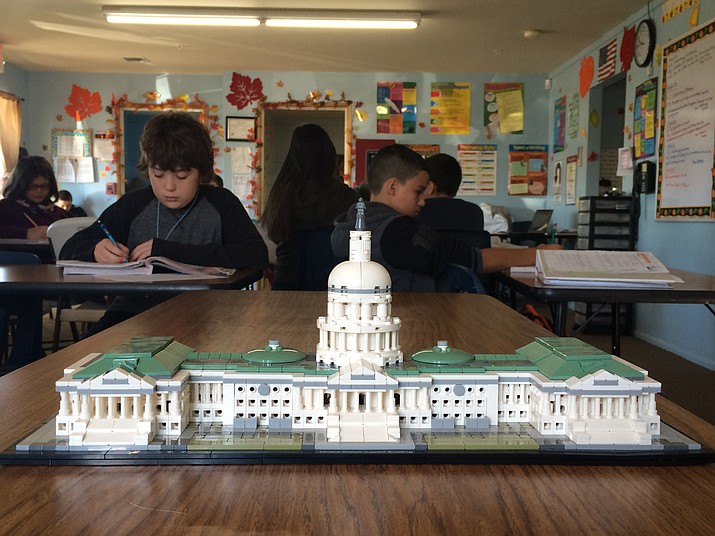 Rather than have the focus of the election be on the fighting and mud-slinging, Acorn Montessori Director Cynthia Johnson came up with a way for the school’s students to learn a little bit more about what was going on for social studies, said eighth grade teacher Kristen Holliday.

“We’re kind of learning all the different parts of government rather than just here’s what’s happening and the mudslinging,” Holliday said. “We had a bunch of kids that really enjoyed working on it. If they had a bunch of their stuff done, they were able to come up and put their pieces together.”

The set of the Capitol Building is quite intricate too, Holliday said, noting that it even has the same floor plan.

One student who did a lot of work on the building was Ben Ferrell, who said he enjoyed being able to have fun playing with LEGOs at school when he got his work done, adding that it’s not something he’s normally allowed to do.

“The most fun I had about it is how much effort and how much detail has to go into the LEGO set itself,” he said, noting that he doesn’t get to build with LEGOs very often at home. “Doing this was a lot of fun, especially at school.”

The walls were the most challenging part of putting the whole thing together, Ferrell said. While the finer details such as the flooring and the statues were not that difficult, they had to make sure the walls were stable and wouldn’t collapse in on themselves, he said.

Building LEGO models of the White House and Capitol Building was a great way to get the students thinking about government and what happens in the government, Holliday said. A lot of the students also had to do a paper on the architecture of the building and write about who came up with it and how it’s changed, she said.

It was enjoyable fort the students all around, Holliday said.

“It was really awesome that they got to do something different rather than just learning straight from the book,” she said. “They had a blast.”