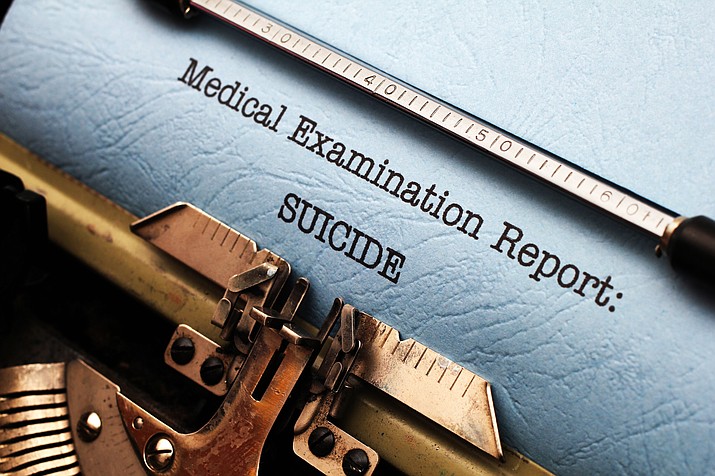 Mark Fischione, M.D., Yavapai County medical examiner, met with nine bodies Wednesday morning, Oct. 26, in Yavapai County, in addition to four from the previous Friday. He determined that eight of the 13 deaths were due to drug overdose, something that is becoming “quite the epidemic,” he said.

Fischione presented a talk on suicides and drug overdose deaths occurring in 2012-15 to nearly 50 people at a meeting of the Yavapai County Suicide Prevention Coalition. In the audience were Sheriff’s officers from Yavapai and Coconino counties, Prescott Police Chief Debora Black, Cottonwood police officers, and counselors from the Quad-Cities.

Figured on a per capita basis, Yavapai County is No. 1 in the state for number of suicides, with Maricopa County second, Fischione said, and the number continues to rise.

“I think there are viable reasons why the suicide rate has gone up,” he said, adding that Coconino and Pima counties, too, have seen an increase, particularly in the past eight years. “The number one reason is the economy. It’s been a big trigger.”

In Arizona, a medical examiner (ME) makes a determination of death from only five categories: natural, suicide, accidental, homicide and undetermined. Sometimes, Fischione said, there’s a gray area between whether a death is determined an accident or a suicide. That’s when he might declare the death “undetermined.”

“It’s based on my best judgment, the history of the way the patient presented, and the autopsy,” he said.

While just over half of drug overdose deaths are accidental (55 percent), about a quarter are suicides. The medical examiner looks at five criteria to make that determination:

• The high levels of a major drug (lethal level).

• Prior history of suicide attempts.

• Strong history of depression with prior talk of suicide.

“The last thing families want to hear from me is that their loved one died by suicide. There is the stigma associated with suicide and the word on the death certificate. Plus, insurance won’t pay,” Fischione said. People have begged him to change the cause the death, and he can’t.

State law requires an autopsy in cases of violent deaths, in-custody deaths, during surgery or under anesthesia, on-the-job deaths, all babies, issues of public health such as tuberculosis, and in cases of drug overdoses. All autopsies include toxicology tests, and many of the people have drugs or alcohol in their systems at the time of death – 65 percent, in fact.

Fischione said that, while marijuana is one of the drugs sometimes found – along with cocaine and others – by itself, it does not cause death.

In 2015, the medical examiners from several Arizona counties noticed cases of heroin overdoses happening within a short time frame. Five of the nine overdose deaths in Yavapai County occurred from mid-April to mid-March, indicating a bad batch was in circulation.

Most often this is due to the addition of the synthetic opioid, fentanyl, or any of the newly created analogs of which there are at least 15 varieties – all unstable and more potent than the original drug. Fentanyl, which is highly addictive, is becoming more popular, Fischione said. It is found in pain-reduction patches that addicts often use, then chew on the adhesive material or boil it down to inject.

Heroin fatalities are increasing – from two documented cases in 2012, to five in 2013, six in 2014, and nine in 2015. Heroin was involved in other cases in which “mixed drug intoxication” is indicated. Of the 13 mixed drug deaths, the other drugs included ethanol (alcohol), methamphetamine, oxycodone, morphine and benzodiazepine.

Intentional drug overdoses aren’t the only types of suicide on the rise. Deaths by asphyxiation, hanging, have doubled from seven cases in 2014 to 14 in 2015. Carbon monoxide poisonings average about three per year. Gunshot wound suicides made up about 53 percent in 2012, decreased slightly and again were 53 percent in 2015.

Fischione said sometimes he hears family members say, “I should have taken those guns away,” when a relative had shown signs of depression and had talked of suicide. He wonders, “Well, why didn’t you?”

Yavapai County has more prescription drug abuse, he said, partly because of its older population and need for pain medication. Combined with issues relating to diseases of the heart, lungs or decreased oxygen to the brain, “It’s a recipe for disaster,” Fischione said.

Nevertheless, he points to methamphetamine as being “king” in this county. He also sees an increased illegal use of Ketamine, a tranquilizer used by veterinarians of big animals.

Often, people don’t know what to do or how to talk about suicide. Peer support is extremely valuable for young people to hear from others who had been suicidal and can say, “Look where I am now,” said one counselor in the audience.

Kristy Snyder said she would like to see suicide prevention programs start in the high school, and wants health care counselors at every school, not just guidance counselors.

Treating what is causing addictive behavior is more important than focusing solely on the addiction itself, said Elizabeth Whittaker, care coordinator with NAZCARE (Northern Arizona Consumers Advancing Recovery by Empowerment).

New this year is state law that requires if a potential gun buyer has a documented history of being a danger to self or others, a background check brings up a mental health indicator that this person is prohibited from owning a gun, a sheriff’s officer stated.