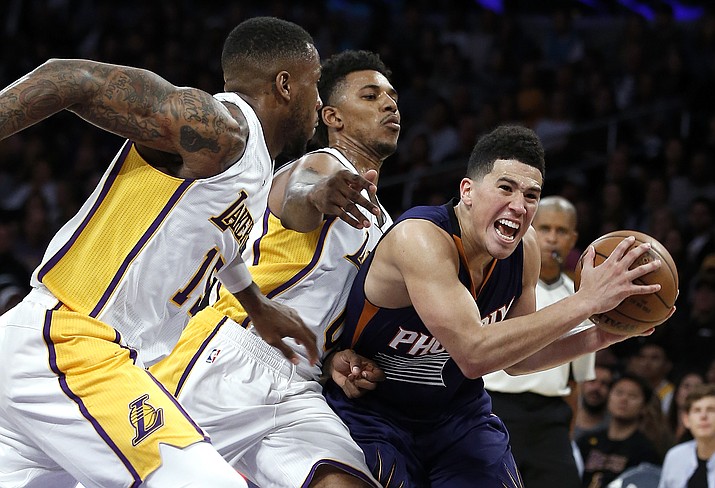 LOS ANGELES — Nick Young scored 22 points, Jordan Clarkson added 18 and the Los Angeles Lakers moved above .500 for only the second time in nearly three years with a 119-108 victory over the Phoenix Suns on Sunday night.

Two days after their stunning upset of Golden State, the Lakers (4-3) held off the Suns down the stretch despite Devin Booker’s career-high 39 points.

Julius Randle scored 18 for the Lakers, and Clarkson hit a 3-pointer with 1:27 left to seal Los Angeles’ third victory in its last 14 meetings with the Suns, who have lost five of seven.

Other than its season-opening victory last month, Los Angeles hadn’t had a winning record since the franchise was 10-9 on Dec. 6, 2013.

The three worst seasons in team history followed, but coach Luke Walton’s new Lakers are already injecting optimism into their huge fan base with up-tempo excitement and a quick start to the season.

Booker scored 29 in the second half while setting a career high for the second straight game. T.J. Warren scored 22 points and Eric Bledsoe added 19 for Phoenix.

Booker followed up his 38-point game against New Orleans on Friday with another beauty. After missing nine of his 12 first-half shots, the 20-year-old heated up with a series of high-difficulty buckets while Phoenix trimmed the Lakers’ lead.

He outplayed D’Angelo Russell, his fellow second-year NBA guard, who had 11 points — eight in the fourth quarter — and six assists for Los Angeles.

The Lakers led by 14 in the third quarter, but Phoenix sliced the lead to 83-81 early in the fourth on back-to-back baskets by Booker. Young boosted the lead back to seven when he converted a four-point play with 4:19 to play, sprawling onto his back near the Lakers’ bench to make sure he drew the foul.

Lakers F Larry Nance Jr. has a concussion after a first-quarter tumble. Nance was undercut by P.J. Tucker while they scrambled for a loose ball near midcourt. Nance didn’t return, and he must miss Tuesday’s game against Dallas as well, according to the NBA’s concussion protocol. Nance is a valuable reserve in his second NBA season, averaging 8.2 points and 5.2 rebounds per game.

Suns: At Portland on Tuesday.