Clinton, Trump use whatever they've got in the final push 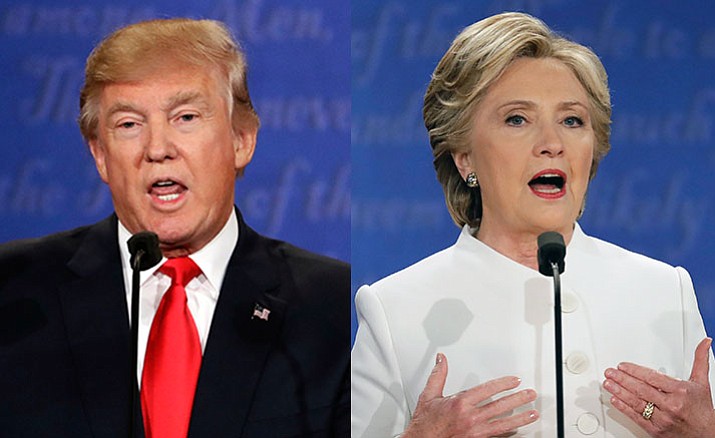 WASHINGTON (AP) — Knock on every door. Marshal every volunteer. Lob every attack.

Hillary Clinton and Donald Trump are opening the final weekend of a marathon campaign by pulling out every tool they have to get their supporters to vote. Polls show critical battleground states may still be up for grabs ahead of Tuesday's election.

Clinton and her allies rushed to shore up support among African-Americans, acknowledging signs of weaker-than-expected turnout in early vote data. That has raised a red flag about diminished enthusiasm that could spell trouble for Democrats up and down the ballot.

The Democrat was due to campaign in Pennsylvania and Michigan on Friday, states long considered Democratic strongholds. She's been pounding Trump for his record on race, accusing him of tacitly encouraging support from white supremacists.

"He has spent this entire campaign offering a dog whistle to his most hateful supporters," Clinton said at a rally in Greenville, North Carolina.

Clinton's shrunken lead has given Trump's campaign fresh hope as he looks for a breakthrough before time runs out. That means zeroing in on questions about Clinton's trustworthiness and a new FBI review of an aide's emails, attacks aimed at appealing to moderate Republicans and independents.

On Thursday, Trump warned voters that never-ending investigations will prevent his Democratic opponent from governing effectively, speaking directly to voters who may be reluctant Trump supporter but are also repelled by the possible return to Washington of Clinton and her husband, former President Bill Clinton.

"Here we go again with the Clintons — you remember the impeachment and the problems," Trump said Thursday at a rally in Jacksonville, Florida. "That's not what we need in our country, folks. We need someone who is ready to go to work."

In spite of a close race in national polling, Trump's path to victory remained narrow. He must win Florida to win the White House, which polls show remains a neck-and-neck race. Early voting has surged in the state. The number of early voters so far, 5.26 million, has already exceeded the overall early voting figure for 2012, and voting will continue this weekend. Republicans have a very narrow edge in ballots cast.

North Carolina also has emerged as critical state for Trump — in part because of early signs that African-American turnout there is lagging.

Both campaigns are so focused on the two states, the candidate and allies have been nearly running into each other at airports. Trump tweeted about gazing at Air Force One at the Miami airport Thursday, using the moment to rip President Barack Obama for campaigning instead of governing.

Both candidates are leaning on surrogates to help carry their message. While Clinton rallies voters in Pittsburgh and Detroit, Obama was to campaign Friday in North Carolina. Bill Clinton was headed to Colorado and Vice President Joe Biden was due in Wisconsin, both states Clinton was believed to have locked up weeks ago. Clinton planned to end her day at a get-out-the-vote rally in Cleveland, using hip-hop artist Jay-Z to draw young people to her cause.

While Trump's children, Eric and Ivanka Trump, hit the trail Thursday, his wife, Melania, made her first speech in months. She vowed to advocate against cyberbullying if she becomes first lady, although she made no reference to her husband's frequent use of Twitter to call his opponents "liars" and "crooked."