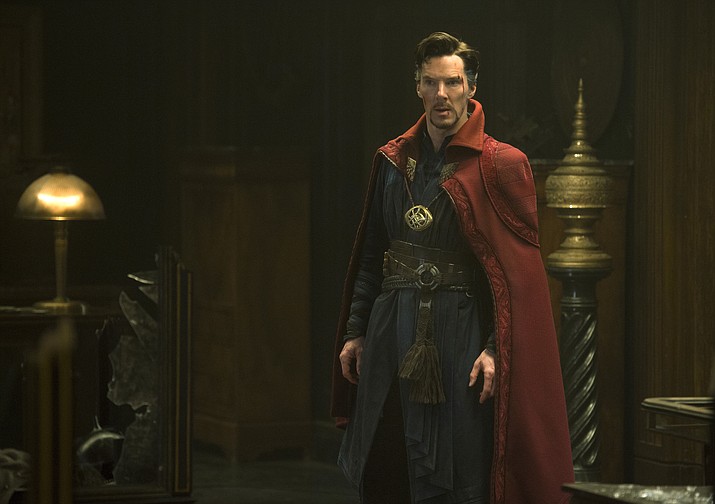 This image released by Disney shows Benedict Cumberbatch in a scene from Marvel's "Doctor Strange." ( Jay Maidment/Disney/Marvel via AP)

(NEW) HACKSAW RIDGE - The extraordinary true story of Desmond Doss [Andrew Garfield] who, in Okinawa during the bloodiest battle of WW II, saved 75 men without firing or carrying a gun. He was the only American soldier in WWII to fight on the front lines without a weapon, as he believed that while the war was justified, killing was nevertheless wrong. As an army medic, he single-handedly evacuated the wounded from behind enemy lines, braved fire while tending to soldiers and was wounded by a grenade and hit by snipers. Doss was the first conscientious objector to ever earn the Congressional Medal of Honor. Rated: R for intense prolonged realistically graphic sequences of war violence including grisly bloody images. Genre: Action & Adventure, Drama

THE ACCOUNTANT – Christian Wolff (Ben Affleck) is a math savant with more affinity for numbers than people. Behind the cover of a small-town CPA office, he works as a freelance accountant for some of the world's most dangerous criminal organizations. With the Treasury Department's Crime Enforcement Division, run by Ray King (J.K. Simmons), starting to close in, Christian takes on a legitimate client: a state-of-the-art robotics company where an accounting clerk (Anna Kendrick) has discovered a discrepancy involving millions of dollars. But as Christian uncooks the books and gets closer to the truth, it is the body count that starts to rise. Rated R for strong violence and language throughout. Drama

BOO! A MADEA HALLOWEEN – Madea winds up in the middle of mayhem when she spends a hilarious, haunted Halloween fending off killers, paranormal poltergeists, ghosts, ghouls and zombies while keeping a watchful eye on a group of misbehaving teens. Rated PG-13 for drug use and references, suggestive content, language, some horror images and thematic material. Comedy, Drama, Horror

DENIAL – Based on the acclaimed book “History on Trial: My Day in Court with a Holocaust Denier,” “Denial” recounts Deborah E. Lipstadt's legal battle for historical truth against David Irving, who accused her of libel when she declared him a Holocaust denier. In the English legal system, the burden of proof is on the accused, therefore it was up to Lipstadt and her legal team to prove the essential truth that the Holocaust occurred. Academy Award-winner Rachel Weisz stars as Lipstadt; Cannes Award winner Timothy Spall is David Irving. Rated PG-13 for thematic material and brief strong language. Drama

INFERNO – In the heart of Italy, Harvard professor of symbology Robert Langdon is drawn into a harrowing world centered on one of history's most enduring and mysterious literary masterpieces: Dante's Inferno. When he wakes up in an Italian hospital with amnesia, he teams up with Sienna Brooks, a doctor he hopes will help him recover his memories. Against this backdrop, Langdon battles a chilling adversary and grapples with an ingenious riddle that pulls him into a landscape of classic art, secret passageways, and futuristic science. Rated PG-13 for sequences of action and violence, disturbing images, some language, thematic elements and brief sensuality. Action/adventure, Drama, Mystery & Suspense

JACK REACHER: NEVER GO BACK – Tom Cruise returns as Jack Reacher in this sequel based on Lee Child's bestselling novel “Never Go Back.” When Army Major Susan Turner, who heads Reacher's old investigative unit, is arrested for Treason, Reacher will stop at nothing to prove her innocence and to uncover the truth behind a major government conspiracy involving soldiers who are being killed. Rated: PG-13 for sequences of violence and action, some bloody images, language and thematic elements. Action & Adventure, Drama

KEEPING UP WITH THE JONESES – A suburban couple becomes embroiled in an international espionage plot when they discover that their seemingly perfect new neighbors are government spies. Rated PG-13 for sexual content, action/violence and brief strong language. Comedy

MISS PEREGRINE’S HOME FOR PECULIAR CHILDREN – From visionary director Tim Burton, and based upon the best-selling novel, comes an unforgettable motion picture experience. When Jake discovers clues to a mystery that spans different worlds and times, he finds a magical place known as Miss Peregrine's Home for Peculiar Children. But the mystery and danger deepen as he gets to know the residents and learns about their special powers ... and their powerful enemies. Ultimately, Jake discovers that only his own special "peculiarity" can save his new friends. Rated PG-13 for intense sequences of fantasy action/violence and peril. Kids & Family, Science Fiction & Fantasy

SULLY – On Jan. 15, 2009, the world witnessed the "Miracle on the Hudson" when Captain "Sully" Sullenberger glided his disabled plane onto the frigid waters of the Hudson River, saving the lives of all 155 aboard. However, even as Sully was being heralded by the public and the media for his unprecedented feat of aviation skill, an investigation was unfolding that threatened to destroy his reputation and his career. Rated PG-13 for some peril and brief strong language. Drama