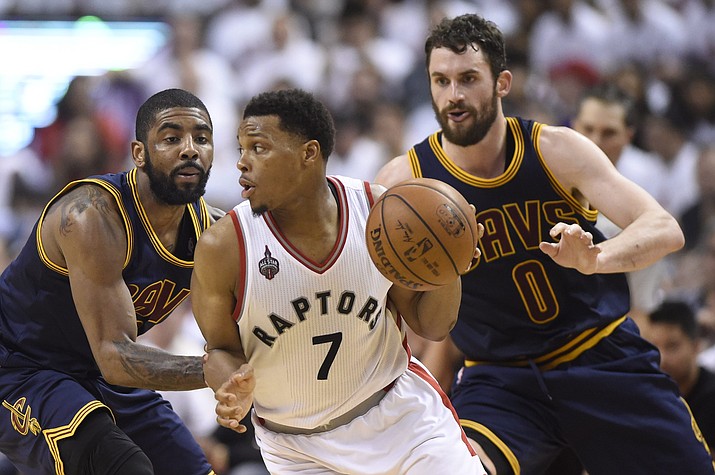 TORONTO — A series that once looked lopsided is now even.

Kyle Lowry scored 35 points, including a driving layup in the final minute, and DeMar DeRozan had 32 as the Toronto Raptors evened the Eastern Conference Finals by beating the Cleveland Cavaliers 105-99 in Game 4 on Monday night.

DeMarre Carroll scored 11 points and Bismack Biyombo had 14 rebounds as Toronto improved to 8-2 at home this postseason and got back on level terms after big losses in Games 1 and 2.

"We've been counted out, and we like that challenge," DeRozan said.

The next challenge for Toronto? Game 5 on Wednesday night in Cleveland, where the Raptors are 0-3 this season, losing by a combined 72 points.

"We have to continue to make sure that when they punch, we punch back," Lowry said. "And if they punch three times, we punch four times."

The Raptors are 2-6 on the road in the playoffs.

After a 10-0 start to these playoffs, the Cavaliers are counting on home court advantage to help them reach their second straight Finals.

"Going back home we have to play a lot better and I think we will," LeBron James said.

Cleveland lost consecutive playoff games to an Eastern Conference opponent for the first time since dropping the final three games of the conference semifinals to Boston in 2010.

"We had a few defensive breakdowns that you can't have down the stretch of a game, especially in the playoffs," Cavs coach Tyronn Lue said. "They executed every time we made a mistake."

James scored 29 points and Kyrie Irving had 26 for the Cavaliers, who trailed by as many as 18 points. Channing Frye scored nine of his 12 points in the fourth quarter.

Lowry scored nine in the fourth and DeRozan had 12, connecting on five of six shots.

"It's a cakewalk for me when (Lowry) gets going," DeRozan said. "It opens up everything."

The Raptors led 78-69 to begin the fourth but Frye made consecutive 3-pointers as Cleveland opened the final quarter with an 8-0 run, cutting it to 78-77. The Cavaliers made their first 11 shots of the fourth quarter.

"It wasn't enough because we got off to a horrible first half once again in this building and you're playing catch up the whole game," James said.

Frye's errant 3-point attempt at 4:12 was Cleveland's first miss of the fourth. DeRozan made two free throws at the other end and, after another miss by Frye, Carroll made one of two to put Toronto up 99-96 with 3:23 to go.

A long 3 by Irving made it 101-99 with 2:00 left, but DeRozan answered with a driving bank shot at 1:33. Toronto got the ball back after Biyombo blocked J.R. Smith's 3, and Biyombo kept the offensive possession alive by rebounding Lowry's missed shot. After a timeout, Lowry let the shot clock wind down before driving for the decisive layup, making it 105-99 with 22 seconds to go.

Toronto jumped out to a 13-5 lead as Cleveland missed eight of its first 10 shots. Following a timeout, the Cavs made five of their next six to cut the deficit but the Raptors led 27-24 after one quarter.

Lowry scored 15 points in the second, making three of Toronto's four 3-pointers, as the Raptors opened a 57-41 halftime lead despite not shooting a single free throw in the first two quarters. It marked the first time a team led by 15 or more at halftime in a conference finals game without shooting a free throw since Game 2 of the 2001 East Finals between Milwaukee and Philadelphia. The Bucks made two of six from the line, the fewest ever made in an NBA playoff game at the time.

DeRozan shot Toronto's first free throws at 6:13 of the third after being tackled by Smith on a drive. The foul drought came after Raptors coach Dwane Casey was fined $25,000 for criticizing the officials following Toronto's Game 3 win.

Fans cheered derisively when Matthew Dellavedova was called for Cleveland's first foul of the game at 8:56 of the second.

NOT MUCH TO LOVE

After shooting 3 for 19 in Game 3, Kevin Love shot 4 for 14 in Game 4. He finished with 10 points. Love did not play in the fourth after appearing to injure his left ankle when he stepped on referee David Guthrie late in the third. "It didn't feel too great," Love said. Lue said Love's health was "no concern."

Cavaliers: James and Irving each had six assists. ... Cleveland shot 3 for 23 from 3-point range in the first half. The finished 13 for 41. . Cleveland's Dahntay Jones served a one-game suspension for hitting Biyombo in the groin in Game 3.

Raptors: Raptors C Jonas Valanciunas was active but did not play. He's been out since spraining his right ankle in the third quarter of Game 3 against Miami on May 7. ... Toronto is 10-1 in the playoffs when holding opponents below 100 points.