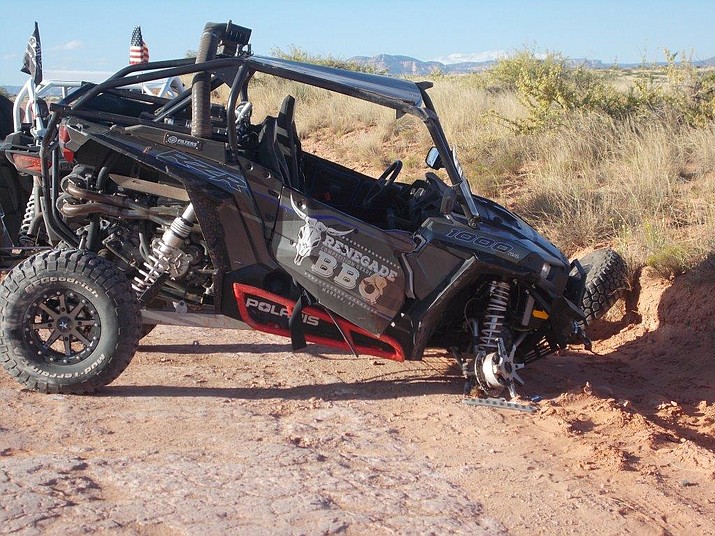 This ATV rolled Saturday, May 21, critically injuring the driver, who was ejected from the vehicle.

COTTONWOOD – An ATV rollover crash Saturday evening, May 21, sent the driver to the hospital with critical injuries, according to Yavapai County Sheriff’s spokesman Dwight D’Evelyn.

Deputies responded to a report of a single-vehicle collision on about 1.5 miles north along Forest Road 761 from Bill Grey Road.

The 40-year-old male driver from Marana had been ejected and was lying on the road with “significant head and upper body injuries,” D’Evelyn said, while 47-year-old female passenger from Tucson was still belted into her seat and sustained only minor injuries.

She told deputies that the driver had been wearing a seatbelt as well, but deputies could not confirm that.

The driver was flown to Flagstaff Medical Center with a broken skull and bleeding on the brain, D’Evelyn said.

“The initial investigation indicates the ATV driver was travelling at an excessive speed as he drove across an uneven portion of the dirt road making it difficult to control the vehicle,” D’Evelyn said. “It appeared the vehicle left the roadway at this point, entered a shallow ditch and when the driver attempted to re-enter the roadway, the vehicle rolled several times before coming to rest.”