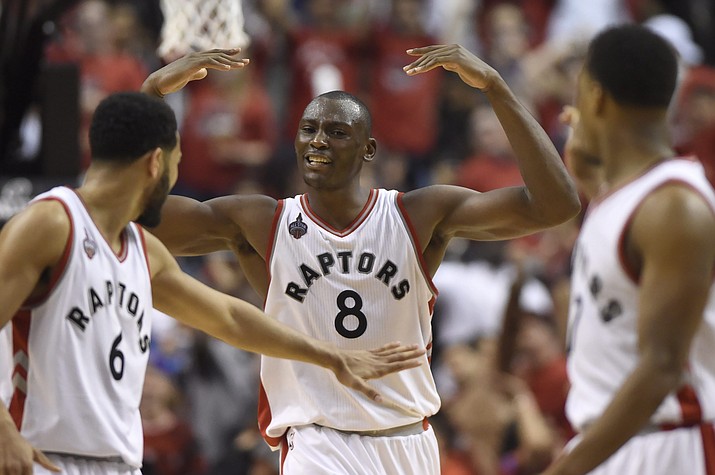 Toronto Raptors center-forward Bismack Biyombo (8) celebrates his dunk with teammates Cory Joseph (6) and Kyle Lowry during the fourth quarter of Game 3 of the NBA basketball Eastern Conference finals against the Cleveland Cavaliers on Saturday in Toronto.

Kyle Lowry scored 20 points, Cory Joseph added 14, and Patrick Patterson and DeMarre Carroll each had 10 for the Raptors. They rebounded in Game 3 after losing the first two games in Cleveland by a combined 50 points.

In Toronto, where “We The North” is a rallying cry, a sell-out crowd dressed in red and white T-shirts helped their team improve to 7-2 at home in these playoffs. Game 4 is Monday night at Air Canada Centre.

LeBron James scored 24 points, and J.R. Smith had 22 for the Cavaliers. They won their first 10 playoff games and were trying to match the Los Angeles Lakers’ record of 11 straight victories to begin a postseason. The Lakers did it in 1989 and again in 2001.

Kyrie Irving scored 13 points, and Channing Frye had 11 for Cleveland. The Cavaliers were held below 100 points for the first time in these playoffs.

It was a rough night for Cavaliers forward Kevin Love, who scored three points and made just one of nine field goal attempts.

James had five assists, moving past Jason Kidd and into third place on the NBA’s career playoff list.

With his team ahead by eight, Biyombo scored six straight points in the final quarter to put the Raptors up 91-77 at 3:38.

DeRozan scored 12 points in the first but saw a buzzer-beating 3 waved off after video review. Lowry scored eight points despite picking up his second four at 5:40 as Toronto led 30-24 after one. It was the first time in nine quarters this series that the Raptors had outscored the Cavaliers.

Carroll, Joseph and Patterson each made 3-pointers during a 16-2 Toronto run midway through the second as the Raptors overcame Lowry’s third foul to take a 54-37 lead.

James went down clutching his face after being accidentally elbowed by Thompson during a scuffle at center court late in the second. Thompson and Joseph were given technicals on the play.

James recovered to make a 3 in the final seconds, but Cleveland trailed 60-47 at halftime.

DeRozan scored 10 in the third and Joseph hit a buzzer-beating 3 to give the Raptors an 80-70 lead heading to the fourth.

Cavaliers: Irving and Love combined to shoot 0 for 9 in the first. ... Matthew Dellavedova played after suffering a sprained left ankle in Game 2.

Raptors: Biyombo set a Toronto playoff record with 16 rebounds in the first half. He broke Jonas Valanciunas’ record of 15, set against Indiana in Game 1 of the first round. Biyombo had 10 rebounds in the first quarter alone. ... Toronto beat the Cavaliers at home twice in the regular season, but lost in its only visit to Cleveland.