Central Arizona Fire and Medical to get new HQ building 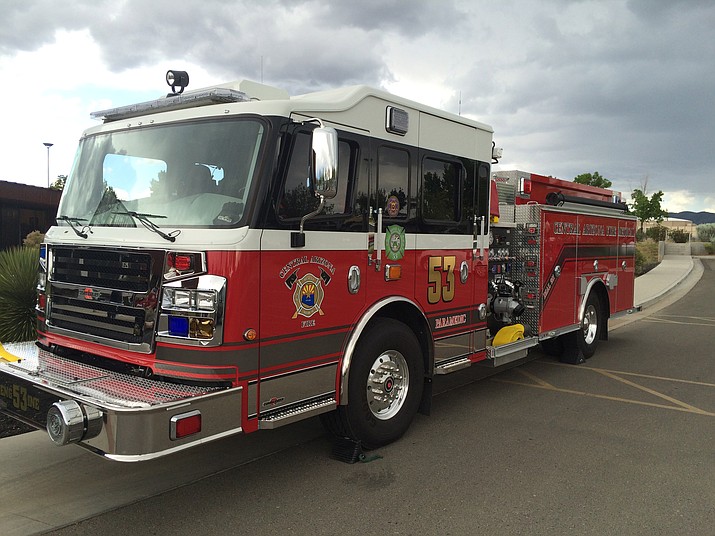 The Central Arizona Fire and Medical Authority displays its brand-new Engine 53 outside the Prescott Valley public library Tuesday afternoon. The 2015 Rosenbauer Commander, a class-1 pumper cost the department about $400,000.

PRESCOTT VALLEY – The new Central Arizona Fire and Medical Authority will buy an office building to be remodeled into its headquarters, the governing board of Central Yavapai Fire District decided Tuesday, May 17.

Purchasing the building at 8603 Eastridge, near Navajo and Highway 69, avoids an estimated $3 million expense to construct a new facility.

The existing building is 14,035 square feet, which allows some room for future expansion.

Because of some roof and parking lot repairs that must be made, the Authority was able to get the seller to come down about $30,000, making the price $1.32 million, Authority Fire Chief Scott Freitag said.

The sale should close by the end of the week, but the building won’t be ready for nearly a year.

“At this point, because the building is under lease – their lease goes until Dec. 31 – which means we wouldn’t start any renovations until January of next year,” Freitag said, “and so, I’d probably look at March or April (of 2017).”

Meanwhile, he said, the Authority would be collecting the lease

payments, which will be applied to the renovation costs.

connected with the building or its sale.

Freitag confirmed that he had located the property and had brought it to Rutherford and the board, and attorney Nick Cornelius said that he found nothing to suggest any conflict of interest with the transaction.

The board also gave tentative approval to a $14.6 million budget with a mill rate of about $2.59 for those living in the Central Yavapai Fire District.